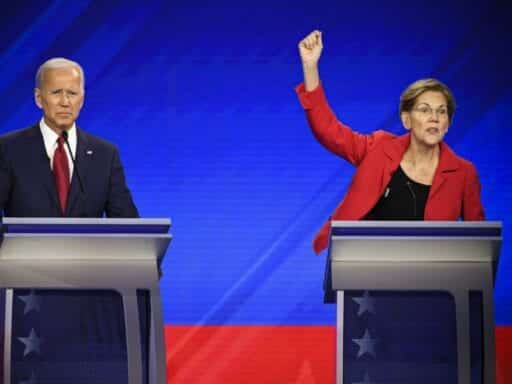 The two rivals finally faced off against one another on the same stage.

According to an analysis by The Washington Post, Biden spoke the most at the Democrats’ third showdown, coming in at 17.4 minutes, followed closely by Warren, who spoke for 16.5 minutes.

Sen. Bernie Sanders, meanwhile, was in a slightly less talkative tier (coming in at 14.1 minutes) with two other candidates pushing to break into double-digit polling — Sen. Cory Booker, who came in third at 14.7 minutes, and Sen. Kamala Harris, who spoke for 13.7 minutes.

After three hours of debate, Joe Biden got the most speaking time, followed by Elizabeth Warren and Cory Booker.

As a whole, the spread of the debate was decently balanced, with most candidates taking the opportunity to chime in on a wide range of subjects. (Since this debate was slightly longer than the previous two, it’s possible this extra time helped give different candidates a bit more time.)

Thursday’s set-up also made for some notable interactions: Warren, Biden, and Sanders, who have pulled ahead of the rest of the Democratic field, finally had the opportunity to spar with one another. They faced off on a series of policies, including Medicare-for-all and assault weapon buybacks, in the course of the three-hour event, and earned some of the most speaking time.

As the candidate consistently leading the polls, Biden was also a central focus of both moderators’ questions and pressure from some of his competitors during the Thursday debate at Texas Southern University. Warren’s presence onstage also spoke to the momentum she’s picked up in recent polls and the leadership she’s established across a number of policy areas ranging from her detailed plans on universal pre-k to housing.

Booker and Harris haven’t been polling quite as high, but both also sought to capitalize on the event to further establish themselves.

Booker’s speaking time was perhaps the most noteworthy given his ranking in the polls — and captured some of the more extensive responses he gave on questions related to criminal justice reform and charter schools.

As was the case with both debates in July and August, women candidates spoke less than men overall because there were so many more male candidates onstage. In total, men spoke for 85.8 minutes compared to women, who spoke for 40.6 minutes.

How America’s middle class got hollowed out
McConnell commemorates President Trump’s last day by specifically blaming him for a riot
Democratic candidates want to use trade to make other countries act on climate change
Bill Gates’s big takeaway from 2019: raise his taxes
The US needs a 9/11 Commission for the coronavirus
Democrats call Trump’s coronavirus relief orders “paltry” and “absurdly unconstitutional”