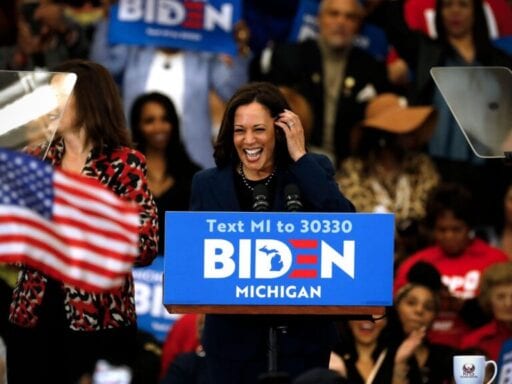 The California senator and former prosecutor is Biden’s pick for vice president.

Harris, who ran for the presidency herself, is a historic choice: She’s the first Black woman and the first Asian American woman to be a major-party nominee for the vice presidency. Among the candidates favored by Democratic voters in recent polls, Harris brings extensive governing experience to the position, though aspects of her record have long prompted progressive criticism.

Harris has been in public service for decades; she was elected to the Senate in 2016 and served as the state’s attorney general and San Francisco’s district attorney before that. A former candidate in the Democratic primary, she’s known for her charismatic campaigning. And she and Biden are close ideologically: Both staked out more moderate positions during the party’s presidential contest.

Harris’s nomination, which followed a lengthy vetting process, sends a message about the future of the Democratic Party — and its commitment to women and Black Americans.

Harris’s profile has risen substantially since her election to the Senate: She’s known for her pointed — often viral — questioning of Trump administration officials as a member of the Senate Intelligence and Judiciary committees, as well as her leadership on issues including police reform and immigration policy.

Her run in the primary began with yet another viral moment — an electric confrontation of Biden over busing and school segregation at a Democratic debate last June — though her candidacy ultimately fizzled in the wake of inconsistent messaging and critiques of her criminal justice record. Now she’s the third woman in US history to hold the vice presidential spot on a major-party ticket (joining Geraldine Ferraro and Sarah Palin). If Biden wins, she’d be the first woman ever to hold that office.

As Biden’s running mate, Harris is poised to be a powerhouse campaigner and an important influence on racial and economic justice policies, two issues she focused on extensively in her own campaign. She’ll likely have to navigate outstanding questions about her record, too, as the campaign seeks to unite and energize Democrats to defeat President Trump in November.

Harris’s selection as VP is a statement about the future of the Democratic Party. Biden had already pledged during the primary that he would choose a woman as his vice president, signaling the importance of women voters to the party. Then, as uprisings in the wake of George Floyd’s killing at the hands of police took place across the country this summer, Biden was under enormous pressure to pick a Black woman as his running mate. Harris quickly rose to the top of the list.

As the first Black woman to be named as a major-party VP nominee, she brings a new perspective to a role that’s often been held by older, white men.

“I feel seen and heard,” Howard University political science professor Keneshia Grant told Vox. “I think the choice of Sen. Harris is important to signal that Vice President Biden is committed to an administration that will commit to doing real, substantive work on the problems we face” with policing and racial inequities.

Harris’s public service record, which includes four years in the Senate, six years as California attorney general, and two terms as the San Francisco district attorney, is seen by some as a key strength. It’s a career Harris began after graduating from Howard University in 1986 and University of California’s Hastings Law School in 1989, and one she’s built on the idea of changing the system from within.

As the daughter of Jamaican and Indian immigrants, both of whom were civil rights activists, Harris has said that combating racial disparities has been a central focus of her career. During her time as attorney general, for example, she established the nation’s first state-led database tracking police killings and racial bias.

As Vox’s German Lopez has written, however, her broader prosecutorial record as attorney general and district attorney has put off many progressives. Policies on uncovering wrongful convictions, as well as a program that threatened parents whose children were truant with prosecution, were among the stances that spurred criticism. During her presidential campaign, the statement “Kamala Is a Cop” was used frequently to question her views on criminal justice reform.

“It was a mixed bag,” says Melina Abdullah, a co-founder of Black Lives Matter Los Angeles, regarding Harris’s record as attorney general. “Her willingness to prosecute corporate criminals is really encouraging, especially around the mortgage crisis and predatory lending. … [But] there was an unwillingness to take on independent investigations around police killings.”

Harris has acknowledged some of her office’s shortcomings and emphasized that she pursued her career as a prosecutor so she could be in the room to implement changes — and push back on existing abuses.

“There have been prosecutors that refused to seat Black jurors, refused to prosecute lynchings, disproportionately condemned young Black men to death row and looked the other way in the face of police brutality,” Harris said at a January 2019 event, Politico reported. “It matters who is in those rooms. I knew I had to be in those rooms. We have to be in those rooms even when there aren’t many like us there.”

Activists argue that Harris could have challenged the system more in that role, while her supporters suggest that her prosecutorial experience, in general, could add to Democrats’ appeal to moderate and swing voters in November. Harris’s public service experience speaks to her readiness as a VP candidate, says Brian Brokaw, a former adviser for Harris’s attorney general and Senate campaigns.

“She’s somebody who would absolutely satisfy what the voters look for in a vice president, which is someone, who can, herself, step up if the situation arises for any reason,” he told Vox. “She’s served as an executive and as a legislator.”

Biden choosing Harris sends a signal about the party’s future

Biden knows that his choice of vice president weighs heavily in any future presidential primary, especially because it’s not clear if Biden would run again in 2024 if elected in 2020. By choosing a younger, dynamic politician who can appeal to two important Democratic constituencies, women and Black voters, he is potentially setting up Harris as his successor.

In the short term, however, both Biden and Harris now face the challenge of uniting and energizing disparate segments of the Democratic Party. Historically, the vice presidential choice has not led to a major change in the electoral outcome, but Harris’s presence is history-making and it’s hard to say how that will factor with voters.

Biden has struggled with enthusiasm in polling — just 31 percent of his supporters said they were excited about the election in a July AP-NORC survey — and some Democrats have argued that choosing a Black woman as his vice president could help energize Black voters. (While Biden performed well with Black voters in the Democratic primary, political observers point to Hillary Clinton’s run in 2016 and note that high support numbers shouldn’t be conflated with excitement for his candidacy.)

Harris’s charismatic and commanding presence in Senate hearings, as well as her longstanding skill as a campaigner, could be an important boost on the now-virtual campaign trail as well as in upcoming debates with Vice President Mike Pence.

“She’s someone who can throw punches when she needs to,” says Brokaw, who adds that she can leave people “quaking in their boots.”

Harris — who also served as one of President Barack Obama’s top surrogates — has already played an active role in fundraising events for Biden, headlining numerous calls led by Women for Biden and raising $3.5 million in a virtual gathering in June.

As a chief author of Democrats’ police reform bill, Harris could also influence the Biden campaign’s policy agenda on this issue area, and several others she’s worked on, including immigration reform.

Harris has said she’s looking forward to increasing the campaign’s outreach and connecting with as many voters as she can, despite the constraints of the pandemic.