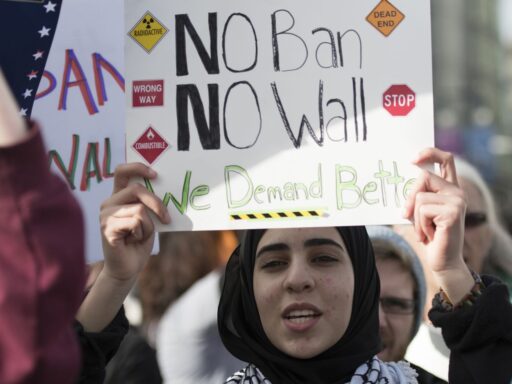 It’s the beginning of the end for Trump’s immigration policies.

The policy, colloquially known as the “Muslim ban,” first went into effect in January 2017 and became one of Trump’s signature immigration policies. The ban has slowed or altogether halted legal immigration from certain countries that the former administration deemed to be security threats, keeping families apart and even stymieing refugee resettlement.

The travel ban was Trump’s first major action on immigration policy, setting the tone for the chaotic four years that followed for immigrants while galvanizing public opposition.

When the ban was announced, it resulted in mass protests in airports across the US where people from the affected countries, which were initially limited to those with majority-Muslim populations, were held for questioning for hours.

This led immigrant advocates to call it a discriminatory “Muslim ban,” citing Trump’s campaign promise to establish a “total and complete shutdown of Muslims entering the United States.” Democrats in Congress, who for years had expressed conflicting positions on immigration policy, coalesced in opposition to the policy, using it to present a united front in condemnation of the xenophobia it represented.

The ban was amended several times in the face of numerous court challenges arguing that Trump did not have the legal authority to issue it and that it unlawfully discriminated against Muslims. The third version of the ban, ultimately upheld by the Supreme Court, barred citizens of seven countries — Iran, Libya, Somalia, Syria, Yemen, Venezuela, and North Korea — from obtaining any kind of visas, largely preventing them from entering the US. (Chad was taken off the list of countries subject to the ban in April 2019 after it met the Trump administration’s demands to share information with US authorities that could aid in efforts to vet foreigners.)

Trump expanded the ban last February to include additional restrictions on citizens of six more countries: Myanmar, Eritrea, Kyrgyzstan, Nigeria, Sudan, and Tanzania. While they could still visit the US, citizens of these countries were, for the most part, barred from settling in the US permanently.

Ending the ban was one of Biden’s topline campaign promises on immigration policy — and he is about to deliver. But this executive order only marks the beginning of a project to erase Trump’s influence on the immigration system, which was primarily concerned with keeping people out through a vast network of executive orders, policy memos, and regulatory changes.

The travel ban represented a sweeping curb on legal immigration

The human cost of the travel ban has been devastating. Not only has the policy torn families apart, but it has also contributed to crises including doctor shortages in rural America and a dramatic drop in enrollment among foreign students from affected countries.

More than 41,000 people have been denied visas due to the ban. Citizens of any of the banned countries could qualify for a waiver that would grant them entry to the US if, for example, they needed urgent medical care or were trying to reunite with their immediate family in the US. But those waivers proved exceedingly difficult to obtain.

Data from the State Department suggests that fewer people have been applying for visas since the ban was enacted: In fiscal year 2019, immigration authorities granted about 39,000 visas to noncitizens from the original seven countries covered by the ban as compared to almost 338,000 just three years prior — about an 88 percent drop. Iran and Venezuela saw the biggest declines.

There was also a significant decline in the number of visas granted to citizens from the six countries subject to the expanded ban in 2020; but it’s hard to say how much of that decrease can be attributed to separate travel restrictions implemented on account of the Covid-19 pandemic. (Biden has left open the possibility of keeping those restrictions in place.)

People affected by the travel ban who have relatives in the US have had to endure a form of family separation for the past four years. Biden’s decision to rescind the ban will “lift a persistent cloud of hopelessness and uncertainty” for families in the US and abroad, Farhana Khera, executive director of the nonprofit Muslim Advocates, said in a statement.

One Syrian American man, Ramez Alghazzouli, waited three years before his wife, Asmaa Khadem Al Arbaiin, could join him in the US due to the ban. Her visa was only granted after the publication of an article in HuffPost detailing his struggle. “This can destroy a human being. I’m not an emotional guy but it distracted and destroyed me,” Alghazzouli told Time.

National security experts have argued that the suffering of those like Alghazzouli was largely in vain: The travel ban has not made America safer, despite the Trump administration’s arguments to the contrary.

The Trump administration claimed that all the affected countries pose threats to US national security based on the findings of multiple government agencies. But the agencies’ findings were never made public, meaning the nature of those threats remains unclear. The administration broadly cited terrorist activity, failure of the countries to properly document their own travelers, and insufficient efforts to cooperate and share information with US authorities as justification for the ban.

But dozens of former intelligence officials have opposed the ban. Elizabeth Neumann, a former assistant secretary for counterterrorism and threat prevention at the Homeland Security Department under the Trump administration, said in a press call earlier this month that the ban has hurt America’s relationships with foreign governments, which are critical to US national security interests. The US government should have worked with foreign governments to improve their own security procedures and information-sharing structures, without punishing them for not already being up to standard, she said.

Neumann and others have also said that the ban, which overemphasized the threat of Islamist terrorism, detracted from national security officials’ ability to respond to the rising threat of domestic terrorism — including the violent insurrection at the US Capitol earlier this month.

“Whatever window dressing the administration sought to put on the travel ban, it’s seen around the world as what it is: an anti-Muslim directive,” Ryan Crocker, a former US ambassador in the Middle East, said in the press call. “And that has damaged us greatly.”

How Biden could make amends for the travel ban

While Wednesday’s news may come as a relief to those affected by the travel ban, it’s clear that ending the ban is only the beginning of the process of dismantling one of Trump’s cruelest immigration policies.

Although legal immigrants now have a greater chance of being approved for a visa, the Trump administration has imposed other barriers, from implementing “extreme vetting” of their applications to expanding biometrics requirements.

“People harmed by the ban will still need to navigate a bureaucratic minefield made even more treacherous by the Trump administration,” Khera said. “The Biden administration must take sweeping administrative action to clear away these hurdles and reunite families as soon as humanly possible.”

Advocates are also pushing Congress to prioritize passing the NO BAN Act, which cleared the House of Representatives in July and would prevent any future administration from implementing a similar ban. The bill would amend the current law to require that any travel ban be temporary, based on credible evidence, subject to congressional oversight, and created only in response to specific actions foreign entities have taken to threaten the US. The bill also states that a ban must advance a compelling government interest in the least restrictive way possible.

Tom Jawetz, vice president of immigration policy at the Center for American Progress think tank, told Vox that legislation like the NO BAN Act is necessary because Biden’s decision to repeal the travel ban will not itself “stop a future administration from trying to shape an immigration system in his or her own anti-immigrant, racist image.”

Biden has incorporated the NO BAN Act in a sweeping immigration reform proposal he will send to Congress on Wednesday. But it remains unclear whether the administration — facing a pandemic and Trump’s impeachment trial — will have the bandwidth to push such legislation through Congress during the president’s first 100 days.

Cancer has a smell. Someday your phone may detect it.
Why we are in danger of losing Aaliyah’s voice
Lakeith Stanfield talks about Tupac, cockroaches, and his star turn in Sorry to Bother You
Trump won’t stop saying the 1918 flu pandemic happened in 1917
Michael Cohen isn’t sounding so loyal to Trump anymore
Democrats are ready to start work on a fourth coronavirus bill. Republicans want to wait.