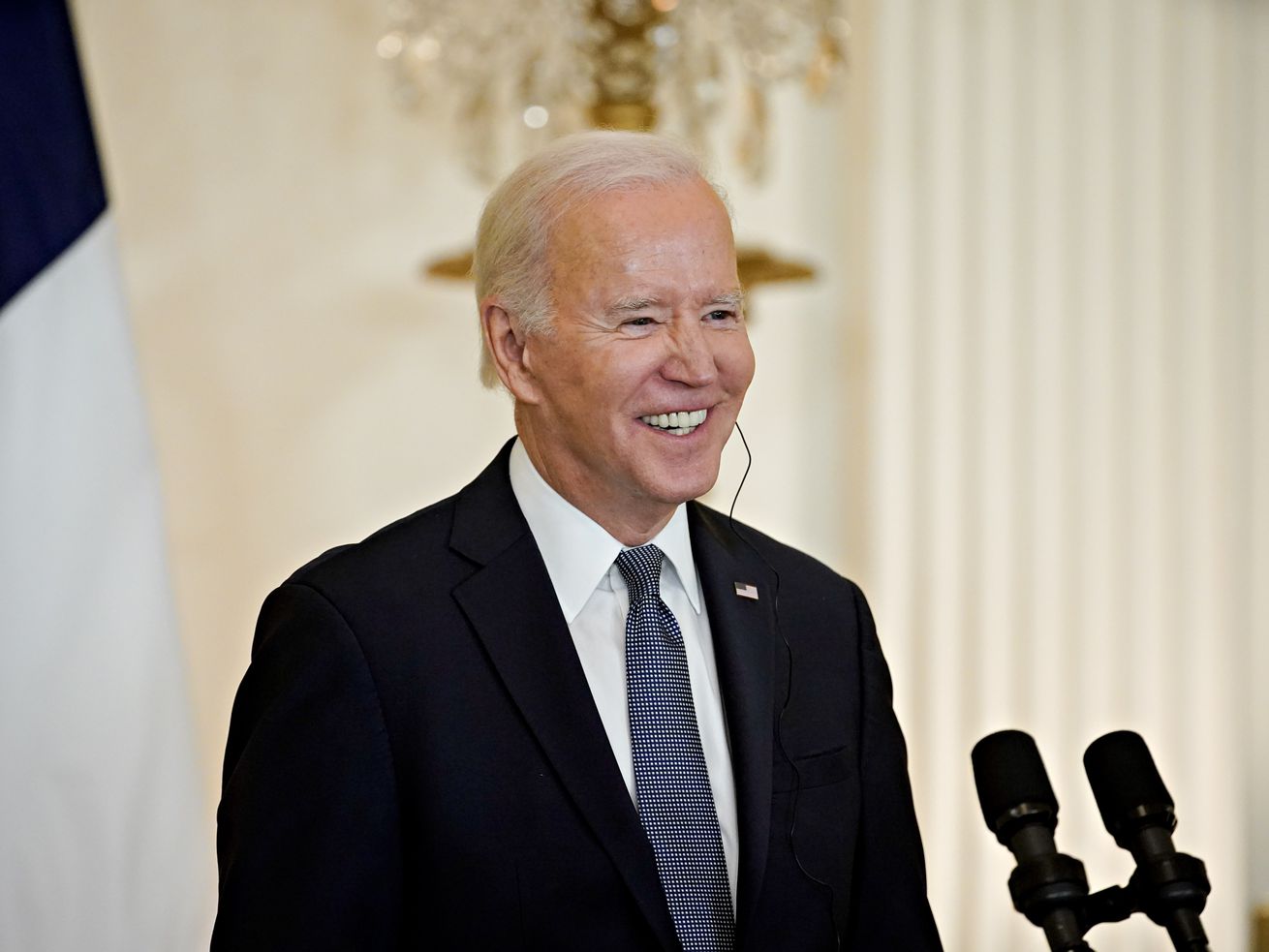 His unexpectedly bold proposal would make the early state lineup more diverse. But enacting it will be a challenge.

A low-key push by Democrats to rework their 2024 presidential primary calendar was thrown into chaos by President Joe Biden Thursday, when Biden proposed an unexpectedly sweeping reshuffle that it’s far from clear the party will be able to enact.

Democrats had already been anticipating kicking Iowa out of their list of states permitted to hold early contests. Then, the expectation was, they’d decide whether New Hampshire or Nevada would go first, and which Midwestern state should be added to join South Carolina and round out the roster, with the Democratic National Committee’s Rules and Bylaws Committee set to make a recommendation this weekend.

Biden’s proposal Thursday then “came as a shock” to leading Democrats, the Washington Post’s Michael Scherer and Tyler Pager reported. Iowa would still be dropped. But the president wants South Carolina to go first, followed by New Hampshire and Nevada on the same day, then Georgia, and then Michigan.

In a publicly released letter to the Rules and Bylaws Committee, Biden did not mention that specific state lineup, but said that it was “unacceptable” that Black voters “have been pushed to the back of the early primary process.” Making South Carolina go first and adding both Georgia and Michigan as early states would certainly address that concern, since Black voters make up a large share of the Democratic electorate in all those states.

But one catch — and a big one — is that Democrats don’t actually have the power to move these states’ official primary dates. Republicans control state governments in New Hampshire, South Carolina, and Georgia, and a Republican will soon be inaugurated governor of Nevada, too. The Republican National Committee has already declared it will make no changes to the Republican nominating calendar, and New Hampshire officials have pledged to ensure no primary goes before theirs. And even Democratic officials in New Hampshire and Nevada have already criticized Biden’s proposal.

Theoretically, state Democratic parties in these GOP-run states can opt out of the state-run primary and hold their own nominating contests on different dates. But that would mean opting out of state funding and election administration and having the party run the contests themselves — an expensive and logistically difficult prospect, particularly given that Biden also said he wants to maximize participation and abandon caucuses.

Overall, Biden’s proposal is an unmistakably bold rethink of an early state lineup that doesn’t make much rational sense and has been left in place due to inertia and fear of stirring up controversy. But he may learn soon enough why prior party leaders have been hesitant to rock the boat.

Neither the Democratic nor Republican Party centrally plans a full schedule for the months-long staggered series of primaries and caucuses that end up determining the presidential nominees — state governments or parties pick their own dates for their particular contests. But after too many states tried to leapfrog each other to go earlier in the process, both national parties laid down restrictions about who gets the special privilege of being an “early state” — one that goes before the floodgates are open for everyone and has the power to greatly influence national perceptions about which candidates can actually win.

Since 2008, Democrats have designated four early states in the following order: Iowa, New Hampshire, Nevada, and South Carolina. They get a whole month to themselves. If any other state tries to jump the line, they’ll be punished by the national party, as Florida and Michigan found out that year. But Iowa and New Hampshire have held on to those first two spots since the 1970s, tenaciously fighting back against anyone else who tries to go in front of them. They’ve romanticized how their small states let retail campaigning and one-on-one interactions, not just big money and ad buys, matter. Yet critics have argued that a racially diverse Democratic Party shouldn’t give two overwhelmingly white states their two most privileged calendar spots.

Inertia persisted until Iowa started really screwing up. The two most recent Democratic presidential caucuses there were controversial and messy. The issue in 2016 was a lack of a paper trail on the actual vote count for the caucuses (which happen predominantly through in-person discussions). Because of that, reforms for 2020 were aimed at increasing transparency, but in practice they complicated the reporting process, badly slowing down results, which ended up taking about a week to get. Technical difficulties and obvious errors in the count made the whole thing look like a clown show.

This time around, there was a sense among many in the party that Iowa’s time was up. Rather than explicitly target Iowa, the DNC said it was opening up the whole early state lineup and invited any state party to apply. In April, they laid out standards for their decision — diversity, general election competitiveness, and feasibility of moving and running a contest.

Over a dozen state parties applied (and the existing early states reapplied). But until Thursday night, what was expected was a pretty simple change: Iowa out at the beginning of the group, and Minnesota or Michigan in toward the end of the group (since the DNC had promised at least one Midwestern state would go early), with the drama being whether New Hampshire or Nevada would get the nod to go first.

Biden’s own views, though, were a mystery. Just days ago, a Politico report described “frustration among some DNC members about the silence from the White House,” quoting one DNC member saying they’d support whatever Biden wanted, but that the White House “has given us nothing.”

What would Biden’s proposal mean?

Now Biden has weighed in. And his proposed early state lineup — South Carolina, then New Hampshire and Nevada on the same day, then Georgia, then Michigan — is significant for several reasons:

Biden has no love for the Iowa caucuses or the New Hampshire primaries. In his 2008 run for president, he finished fifth in Iowa and subsequently dropped out. In 2020, he did nearly as badly, coming in fourth in Iowa and fifth in New Hampshire — but he recovered to come in second in Nevada, won South Carolina big, and then dominated on Super Tuesday. Those results give him a decent argument that, in addition to being unfavorable to him personally, Iowa and New Hampshire are simply out of step with the national Democratic Party.

More broadly, the lineup has implications for the two major splits that have emerged in recent contested Democratic nominations: race and ideology. Black voters (who overwhelmingly backed Barack Obama over Hillary Clinton in 2008, Clinton over Bernie Sanders in 2016, and Biden over Sanders and other candidates in 2020) would get enormous influence in Biden’s calendar. The mostly white states, as well as Nevada, where Latinos represent much of the Democratic electorate, would see their relative influence decrease.

When it comes to ideology, Sanders did relatively well in both 2016 and 2020 in Iowa, New Hampshire, and Nevada — states that Biden is demoting — and he did poorly in both years in South Carolina and Georgia, states Biden is promoting. Michigan is tougher to categorize, since Sanders upset Clinton there in 2016 but lost big to Biden there in 2020. But overall, allotting two of five early state spots to Southern states probably wouldn’t help progressives’ chances in future presidential contests.

It’s not even clear if Democrats will have a contested nomination in 2024 if Biden runs again, as he’s suggested he will. So it’s unclear whether, if these changes are adopted, they’ll matter much in the near term. Additionally Biden’s letter stressed that he intended these changes to apply only to the 2024 cycle, and that the DNC should review the calendar every four years — but once you get added as an early state, that’s likely a big advantage in your favor as you seek to retain that position in the future. So how this plays out likely will matter, at least eventually.

Will this even happen?

Part of the reason Biden’s proposal is so surprising is that it seems to disregard the rather important practical question of whether Democrats can even implement these calendar changes.

To understand why, keep in mind that primaries are run and administered by state governments — not the parties. It’s expensive to hold a statewide primary and challenging to administer one, and the state government is generally best experienced at doing so. But if you want the state to foot the bill, the state picks the date. Primary dates generally are set in state law, and moving those dates would require passing new laws.

So while technically either party is free to hold its nominating contests whenever they like, in practice most let the state government take care of it. And in three of Biden’s proposed early states — South Carolina, New Hampshire, and Georgia — Republicans fully control the government. They likely will not be eager to move primary dates in accordance with Joe Biden’s wishes. And the RNC has already said it would make no changes to its own calendar. (New Hampshire state law requires the state to hold the nation’s first primary, and empowers the secretary of state to move the date to make that happen.)

Michigan is the exception — Democrats won control of their legislature and Gov. Gretchen Whitmer (D) was reelected), so the party can move the primary when they want. That’s one reason it was expected the DNC’s eventual proposal wouldn’t change much besides dropping Iowa and adding Michigan at the end of the lineup. Indeed, the party nodded to this in making “feasibility” one of its main criteria to judge its proposed calendar changes, but Biden seems not to have shared that goal.

Theoretically, it would be possible for state Democratic parties in GOP-run states to opt out of the government-run primaries and fund and run their own nominating contests. Many parties have run caucuses for that reason in the past. But caucuses require in-person attendance at a specific time, and that lowers turnout, so Democrats have soured on them — indeed, Biden wrote in his DNC letter that he wanted to “rid the nominating process” of caucuses. A “party-run primary,” as a few Democratic states used in 2020, is another alternative, but, again, it would be expensive and daunting to make it as accessible as a normal state-run primary.

All that means that Biden’s proposal may well be more aspirational than realistic. Michigan will likely become an early state, but there are big question marks around what happens with every other state as well as the overall order.

And even Biden’s idea, ambitious as it is, didn’t address some of the biggest problems of the current system. One is simple unfairness: Why should some states’ voters get special privileges to be treated as more important than others, because of their place on the calendar? The other is volatility: Does it really make sense to have a major-party nominee so heavily influenced by the exact sequence of four or five states out of 50 that go first? The impact of the early states can often feel random and arbitrary. Without a more sweeping overhaul, that won’t change.