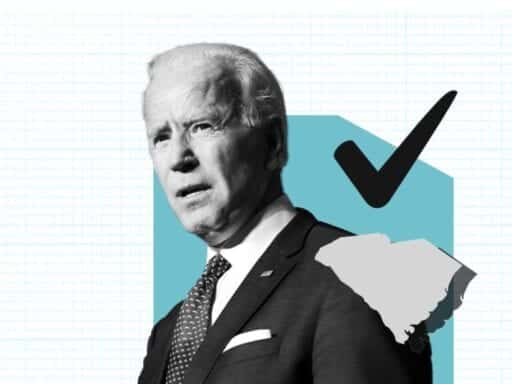 Biden is still leading by double digits in the crucial early state, while other Democrats struggle to pick up African American support.

According to an online poll conducted by YouGov and sponsored by FairVote, Biden comes in first in both a standard poll that asks voters to pick one candidate and a ranked-choice poll that’s designed to suss out whom a majority of people ultimately prefer. Sen. Bernie Sanders, meanwhile, comes in second and trails him by double digits across both surveys.

When the votes are counted in a ranked-choice system, if no candidate has accrued more than 50 percent of the vote, the candidate who has the fewest first-choice votes is removed. Those votes then go to each voter’s second choice. This process is repeated until one candidate secures a majority of the vote. So a person whose top choice was Rep. Tulsi Gabbard and second choice was Sanders, for example, could see their vote move to Sanders after Gabbard had been eliminated.

These polls underscore Biden’s ongoing strength in the crucial early primary state — and suggest that it could ultimately serve as a much-needed firewall if he loses to other candidates in Iowa and New Hampshire. Given his strong base of support with African American voters, who make up 60 percent of South Carolina’s Democratic electorate, Biden has long been seen as the leading contender in the Palmetto State. The YouGov/FairVote poll adds yet another confirmation: African American voters were more than twice as likely to list Biden as their top choice compared to white voters in the survey.

It’s worth noting that there are still more than two months left before the South Carolina primary takes place on February 29, and the field could see significant changes before then. Additionally, while polling offers a snapshot of how voters are feeling in-state, it only tells a fraction of the story and shouldn’t be seen as offering a definitive status of the race.

Still, it’s interesting that Biden not only topped this poll outright, he also performed well in the ranked-choice poll, which is intended to represent the interests of a broader swath of voters. (Under the current system, for instance, if Biden were to win with 45 percent of the vote in South Carolina, only those voters’ preferences are effectively expressed. However, if a final result included some voters’ second and third choices, that would mean that their interests are also captured in the final outcome.)

The outcome of this poll differs from a national survey conducted earlier this year when Sen. Elizabeth Warren beat Biden in a ranked-choice poll. It highlights how South Carolina voters, an electorate that is significantly more diverse than Iowa or New Hampshire, are still solidly behind the former Vice President even as national polls and other early states show more fluctuation.

Walking through the results

In the YouGov/FairVote survey, voters were able to rank the roughly 15 candidates who are left in the Democratic field. A few of the candidates who were part of the poll, including Sen. Kamala Harris and Montana Gov. Steve Bullock, have dropped out of the race since the survey was conducted between November 22-December 2. The support for those candidates has been redistributed to the people voters listed as their second or third choices, as part of the final ranked-choice result.

Because of how ranked-choice polling works, it makes it easy to see which candidates would benefit most if a specific person dropped out of the race. For example, since Harris has suspended her campaign, this poll shows that her support has predominately migrated to Warren, Buttigieg, and Sanders — though the initial pool of backing she had was too small to identify a reliable trend for second-choice voters.

As the visual below indicates, Biden started with a strong lead and continued to pick up support as other Democratic candidates were eliminated. For simplicity’s sake, we eliminated every other candidate in the field until we were left with the top five candidates, picking up the ranked-choice process several rounds in.

In order to check out how the polling outcomes change when different candidates are removed, you can use an interactive tool on FairVote’s website.

Since candidates “win” in ranked-choice voting after they obtain more than 50 percent of the vote, Biden won after picking up support from a lot of the lower-polling candidates. In order to demonstrate what would happen if we kept whittling down the field using the same logic, the following graphic walks through the results when some of the other top-tier candidates are eliminated.

As Vox’s Andrew Prokop has explained, it’s important to note that these results are weighted to be representative of a larger electorate:

The actual counts of voters are rounded from a weighted sample — they’re being presented here to help simulate how the tally would work in a real election, based on these poll results.

The use of ranked-choice voting in the Democratic primary would also be slightly more complicated than the exact application of this poll.

In South Carolina, candidates need to receive at least 15 percent of the vote in either a particular congressional district or statewide in order to be eligible for any delegates. Theoretically, if the ranked-choice method were used in this context, anyone who does not receive 15 percent could be eliminated and their delegates ultimately redistributed to others who do hit that threshold.

The YouGov/FairVote poll reiterates a dynamic that’s emerged in the 2020 race: All candidates besides Biden are still struggling to gain support from black voters. According to a December Morning Consult poll, 42 percent of African American voters prefer Biden, who is followed by Sanders at 21 percent and Warren at 9 percent.

The broader numbers, of course, obscure key differences across age. Among voters born after 1970, the YouGov/FairVote poll finds that a larger portion favor Sanders compared to older voters, though he still comes in behind Biden with this group. Sanders has 17 percent of voter support while Biden has 34.

Younger black voters who spoke with Vox have emphasized that they are interested in more ambitious policies than the ones Biden has championed. Many older black voters also cited Biden’s work alongside former President Barack Obama as a major asset, though younger voters did not weigh these efforts as strongly.

Since the primary will remain fluid until much closer to the election, it’s possible that many South Carolina voters could still change their candidate between now then. In this particular poll, though, Biden is keeping a strong grip on the lead.

This year’s Best Documentary Feature Oscar nominees focus on a changing world
Biden’s LGBTQ rights executive order and the transphobic backlash, explained
Trump wants his name on millions of stimulus checks, even if it delays them
Is it immoral if you feel schadenfreude about Trump’s Covid-19?
Trump’s election-stealing plot is dangerous — even if it fails
I listened to the Supreme Court argue about my rights as a trans person. I have never felt more frus...