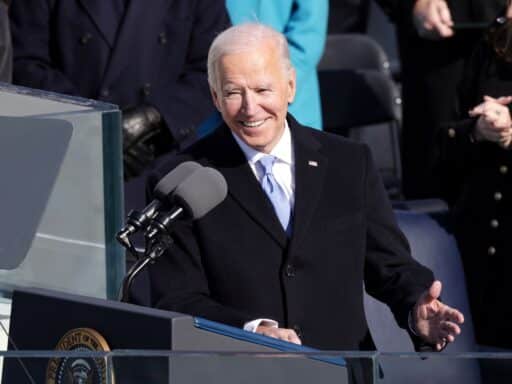 In his first foreign policy move, Biden fired Michael Pack, the head of the US Agency for Global Media.

In his first foreign policy act, President Joe Biden followed through on his promise to fire the head of the US Agency for Global Media, who abused his eight months in power trying to turn the US government-funded international media agency into a pro-Trump propaganda machine.

Michael Pack, an ally of former President Donald Trump and Steve Bannon, resigned on Wednesday soon after Biden finished his inaugural address. In a letter, Pack said Biden’s team asked him to step down from his post as the head of the US Agency for Global Media (USAGM), a government department that oversees media organizations like Voice of America and Radio Free Europe/Radio Liberty — and is collectively one of the largest media networks in the world.

“I serve at the pleasure of not one particular president, but the office of the president itself,” Pack wrote. “Your administration has requested my resignation, and that is why I am tendering it.”

Pack was slated to serve a three-year term after his Senate confirmation to the job last summer. But Biden was clearly displeased with how Pack ran the organization, which is responsible for broadcasting unbiased news to nations that struggle to get unfiltered information — which explains why Biden prioritized Pack’s ouster.

What Pack did to earn Biden’s distrust

Pack made clear from the get-go that he would run the media agency by whim, not law.

In his first hours at the helm last June, Pack fired the heads of USAGM’s outlets because they were too soft on China and didn’t defend American values — as Trump would describe them — enough to the rest of the world.

For many people, especially the agency’s employees, that move violated USAGM’s “firewall,” enshrined in US law, that “prohibits interference by any US government official in the objective, independent reporting of news, thereby safeguarding the ability of our journalists to develop content that reflects the highest professional standards of journalism, free of political interference.”

Even though the government funds the news agencies, they still run independently when it comes to editorial decision-making. Pack, then, could ensure the day-to-day operations of USAGM operations went smoothly, but he couldn’t force himself into the editorial processes of the organization. But by firing the agency staffers without apparent cause, Pack inserted himself into the way the outlets did the news.

In case anyone thought Pack may have just had some growing pains and made mistakes, he was open about his designs on the agency.

“My job really is to drain the swamp, to root out corruption, and to deal with these issues of bias,” he said on The Federalist Radio Hour podcast last August, joking with the host that he’d “look into” doing so by turning off the air conditioning or banning masks. However, he did say it was not his goal “to tell journalists what to report” and that he was not purging employees.

But that last part just wasn’t true. Among other things, Pack fired senior officials for telling him that his actions violated “firewall” laws and did nothing as top Voice of America staff reassigned the outlet’s White House reporter for asking tough questions of Secretary of State Mike Pompeo.

The situation got so bad that 11 whistleblowers in 2020 sent complaints to the federal watchdog US Office of Special Counsel. After months of review, the agency found in December that USAGM leadership — and mainly Pack — “repeatedly violated the Voice of America firewall” and “engaged in gross mismanagement and abuse of authority.”

One VOA journalist I spoke to who worked under Pack these last eight months couldn’t have been happier with the news of his ouster. “There are a lot of people celebrating and breathing sighs of relief,” the person told me, speaking on the condition of anonymity to avoid retribution, citing the fact that Pack-allied staffers remain in leadership roles. The journalist hoped Biden and his team would oust those staffers soon, too.

Whether they will or not is still an open question. That means that USAGM may have lost its leader, but the agency could continue to face more problems, even with Biden at the helm.