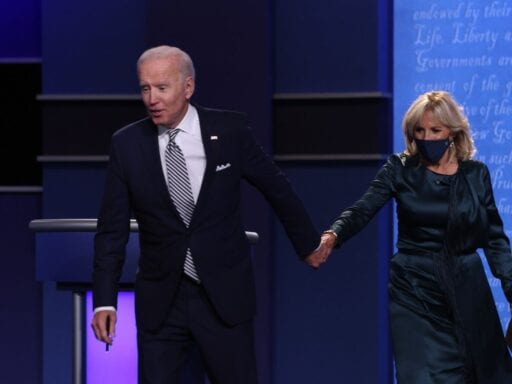 Biden raised nearly $4 million in one hour after the debate.

At the end of a bruising first presidential debate on Tuesday night, Democratic presidential nominee Joe Biden’s campaign announced yet another fundraising milestone.

The campaign saw $3.8 million raised between 10-11 pm ET during the debate, breaking its own record for the amount raised in a single hour, according to campaign officials. A couple of hours later, Democratic National Committee officials announced the party had its best fundraising hour on record from 11 pm-12 am ET, although party officials did not say how much was raised.

The fundraising numbers are another sign of enthusiasm for the Democratic candidate, and will help ensure Biden has a cash advantage going into the last few weeks of a contentious campaign.

The haul — which comes after Democrats and progressive grassroots groups raised more than $300 million in the wake of Justice Ruth Bader Ginsburg’s death — will also help keep Biden competitive against a Republican incumbent who has not been careful managing his money. President Donald Trump started out the race with a massive $1.1 billion war chest, but his campaign has spent the vast majority of that sum. The president now has less cash on hand than his Democratic competitor, and Biden and the Democrats have been outraising him in recent months.

Both campaigns’ best opportunities for fundraising thus far have come during big televised events, like Tuesday night’s debate and the Democratic National Convention. Biden’s campaign pulled in $70 million during the DNC; the Trump campaign later announced it had fundraised $76 million with the RNC and its various joint fundraising committees during the Republican National Convention.

As of Wednesday morning, the Trump campaign hadn’t yet released it’s post-debate fundraising numbers. A Trump campaign spokesperson did not immediately respond to Vox’s request for comment.

The debate was a mess, but it looks like Biden came out on top

The first presidential debate is typically a chance for the incumbent president to defend their record and make the case for a second term. Trump did none of that on Tuesday.

Instead, his debate performance was marked by shouting, constantly interrupting Biden (who exasperatedly said, “Will you shut up, man?”) and getting into arguments with debate moderator and Fox News Sunday anchor Chris Wallace. Trump’s stand-out moment was when he again refused to condemn white supremacists, instead telling the violent far-right group Proud Boys to “stand back and stand by.”

Biden’s debate performance was muted at times, but the vice president more or less did what he needed to do. Biden looked directly into the camera to speak to Americans watching at home on Tuesday, with a consistent message: Trump doesn’t care about the people he’s supposed to lead, and Biden does.

“It’s not about my family or his family, it’s about you,” Biden said.

As Vox’s Andrew Prokop wrote, we don’t yet have enough comprehensive polling data to tell decisively who won the debate. But the early polls and focus groups are in Biden’s favor.

CBS News and YouGov have been tracking respondents in battleground states, and they were able to quickly contact some of those respondents and ask those who watched the Tuesday debate what they thought. Overall, 48 percent said Biden won the debate, while 41 percent said Trump won, and 10 percent said it was a tie. As CBS elections and survey director Anthony Salvanto pointed out on air, this was pretty close to the support for each candidate going in.

Biden’s fundraising record set on Tuesday night underscores that he was able to turn an otherwise messy debate night to his advantage.

Amazon scrapped its New York City plans. Some residents are elated — others are disappointed.
A whistleblower has filed a complaint about a Trump phone call with a foreign leader
Bob Woodward’s new book Rage, and the controversies around it, explained
This nurse is treating the sickest coronavirus patients. Trump still wants to deport him.
A white neighbor called police on a kid mowing a lawn. Later, they called as he played in a yard.
Let’s talk about the ending of The Half of It