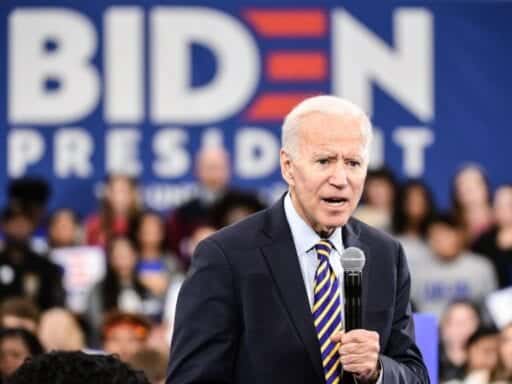 A new poll shows the former vice president with a 28-point lead among Democratic-leaning black voters.

Former Vice President Joe Biden has often claimed to have “broad support from the African American community,” and according to a recent Washington Post-Ipsos poll, he’s right.

The national poll, conducted from January 2 through January 8, found that Biden holds a lead of about 28 points among Democratic-leaning black voters, with 48 percent support. That number places him ahead of second-place Sen. Bernie Sanders, who has 20 percent support with a 4 percent margin of error. Even more striking, Biden and Sanders were the only candidates to achieve double-digit support among black voters: Former South Bend Mayor Pete Buttigieg, whose struggles to gain support from the African American community have been well-documented, only eked out 2 percent.

The poll is a reminder of the political landscape that awaits candidates after they exit the extremely white, first-in-the-nation caucus and primary states of Iowa and New Hampshire and head to South Carolina, Nevada, and the subsequent Super Tuesday states, many of which are more representative of the national Democratic coalition.

And it appears to reflect candidates’ standing in state polls. For instance, a Des Moines Register/CNN poll released Friday found Biden in fourth place in Iowa, with about 15 percent support. In a Thursday Fox News South Carolina poll, Biden earned 36 percent support in that state. Iowa is around 91 percent white and only 4 percent African American; South Carolina, on the other hand, has a population that is 27 percent black.

Biden also outperformed his competitors with black voters on several other metrics, according to the Washington Post-Ipsos poll. He holds a 6-point lead in total favorability over Sanders, and leads Sanders by more than 20 points when respondents were asked about candidates’ ability to defeat President Donald Trump and to unite the country.

Biden’s support lagged among one group in the poll, however: Young black voters were more likely to support Sanders over Biden, by a margin of 12 points. Those voters, according to Astead Herndon of the New York Times, are skeptical of Biden’s moderate politics, and many hope to convince their Biden-supporting elders to consider more progressive candidates for the Democratic nomination for president.

Young black South Carolina voters Vox’s Li Zhou spoke to said the same: “Younger African Americans like Joe Biden, but a lot of us aren’t supportive of Joe Biden, because we want a change in policies,” 28-year-old South Carolina state Rep. Kambrell Garvin told her. “We aren’t looking to tinker around the edges.”

This relationship is something Biden himself often touts: During the November Democratic debate, he said, “I have more people supporting me in the black community because they know me, they know who I am.”

And as he has pointed out, Biden leads in the endorsement primary with 10 endorsements from Congressional Black Caucus members, a base of support that he’s been able to consolidate since California Sen. Kamala Harris left the race in early December.

However, before the contests in the more diverse states, Biden has to make it through Iowa and New Hampshire. For now, he enters Iowa with substantially lower numbers than his early-summer peak in the state, and the state has a way of shaking up the race — just ask Barack Obama circa 2008. But Biden’s black support, at least, remains consistent.

Why do memes matter?
Trump says he’d accept help from foreign actors offering dirt on 2020 Democrats
It’s time to rethink how much booze may be too much
Brazil could surpass the US as the country worst hit by coronavirus this summer
A Republican senator threatened to kick Cory Booker out of the Senate over releasing “confidential” ...
The pungent legacy of Axe Body Spray