Joe Biden will get the Covid-19 vaccine on live TV 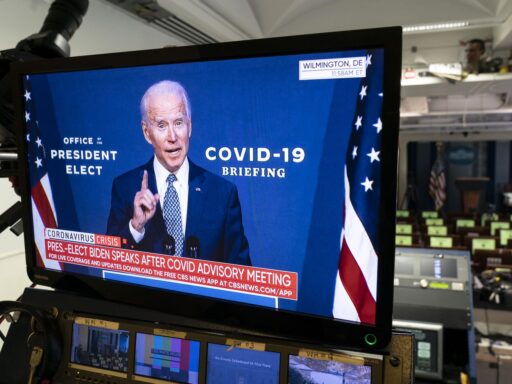 The president-elect wants to convince Americans that the vaccine is safe and effective.

President-elect Joe Biden and soon-to-be first lady Jill Biden will receive their first doses of the Covid-19 vaccine in Delaware on Monday on live TV. Biden announced that his plan to get vaccinated is part of the urgent effort to show Americans that the vaccine is safe and effective.

When the Food and Drug Administration authorized the Moderna vaccine for emergency use on Friday, Biden said getting the vaccine is “about more than politics.”

“This is about saving lives,” he said. “I look forward to receiving the vaccine publicly on Monday and continuing to build confidence in the scientific process. Vaccines don’t save lives, vaccinations do.” The Biden transition team has not yet announced when Biden will receive his shot on Monday.

Biden joins a growing list of lawmakers who have lined up for the shot as provided under the country’s continuity of government framework. Vice President Mike Pence, second lady Karen Pence, and US Surgeon General Jerome Adams all received the vaccine on live television on Friday. House Speaker Nancy Pelosi and Senate Majority Leader Mitch McConnell rolled up their sleeves for the vaccine too, with Pelosi touting her confidence in science and McConnell claiming that more Americans need the vaccine “as fast as possible.” Other lawmakers, like Rep. Alexandria Ocasio-Cortez (D-NY), took to social media to broadcast the process.

Biden’s decision to get vaccinated before the public may help reluctant Americans who still say they want to wait it out or not take the vaccine at all. An ABC/Ipsos poll released on December 14 found that more than 80 percent of Americans are willing to take the vaccine but just 40 percent say they would take it as soon as it’s available to them.

Despite the growing effort to convince Americans that the vaccine is safe, President Donald Trump has not announced plans to be vaccinated. Republicans are also less likely to say they will take the vaccine. The administration has sent a mixed message about the vaccine as Trump has focused his efforts on attempting to overturn the election results.

The coronavirus has killed more than 310,000 Americans; experts estimate that 60 to 85 percent of Americans must be vaccinated to achieve true herd immunity.

Biden may want to make sure that his vaccination is broadcast into certain households, since the latest data on vaccine hesitancy shows that specific groups, like Republicans, rural Americans, and Black people, are more wary of the Covid-19 vaccine.

According to the Kaiser Family Foundation’s December Covid-19 monitor of public opinion, vaccine hesitancy can be reduced with more information since many Americans, across specific groups, still believe misinformation about the vaccines.

The survey found that about a quarter (27 percent) of the public is still vaccine-hesitant, claiming that they probably or definitely won’t get a Covid-19 vaccine. But the number is higher among Republicans (42 percent), those ages 30 to 49 (36 percent), rural residents (35 percent), and Black adults (35 percent).

Those who reported feeling hesitant about the vaccine claimed to be worried about potential side effects and cited lack of trust in government to ensure vaccine safety and effectiveness. Respondents also claimed that the vaccine was too new and that politics and partisanship played a negative role in the vaccine’s development. For Black adults, many reported not trusting vaccines in general and are worried that they might get Covid-19 from the vaccine itself.

The survey found that the share of people who said they would get the vaccine has increased by 8 percent since September. Black Americans’ willingness to get the vaccine increased from 50 percent in September to 62 percent in December. Willingness increased for Republicans during those months too, from 42 percent to 56 percent. This rise gives researchers hope that more information about the vaccine can change minds. The survey also reported that as more trusted sources reveal they have been vaccinated, more people will sign up to be vaccinated.

Biden plans to have 100 million vaccine shots administered in the first 100 days of his administration. “The fight against Covid-19 is not yet over,” he said in a statement. “We know the immense challenges ahead, including scaling up manufacturing, distribution, and the monumental task of vaccinating hundreds of millions of Americans.”