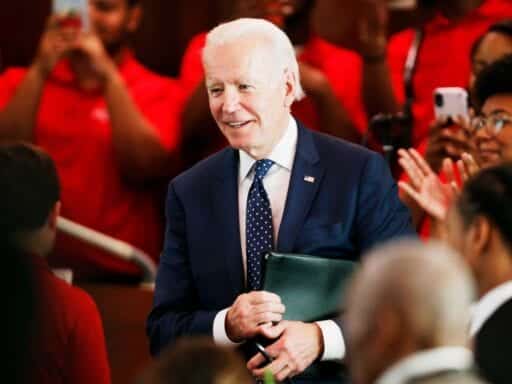 Biden follows up his big win in South Carolina with a victory in Alabama.

Former Vice President Joe Biden has won the Alabama Democratic primary — and in yet another state, his investment in the South appears to be paying off.

Biden struggled through the presidential primary’s first few races, but promised his supporters nationally he would perform to their expectations once voting moved to states with more diverse populations.

“I’m the only one who has the record and has the background and has the support,” Biden said following the New Hampshire primary, where he came in a disappointing fifth. “They know me. They know who I am.”

And starting in Nevada — a state in which about 10 percent of the Democratic electorate is black — he seemed to be right, winning among black voters there, before going on to a resounding victory in South Carolina, a state with a 60-percent black Democratic electorate.

And now, in Alabama, a state with similar demographics — its 2016 primary electorate was 54 percent black — Barack Obama’s vice president has once again pulled off a victory.

How this win affects Biden’s overall standing in the race remains to be seen — the Super Tuesday races feature a number of states that would appear to advantage Biden demographically, and his total delegate haul from the 52 at stake in Alabama and the other 1,292 from Tuesday’s other contests will become clearer in the days to come — but this win in Alabama will only bolster his claim that he is the race’s most electable candidate, and will lend credence to his claim that he is uniquely able to rally Democrats’ diverse base in November.

Few Alabama polls were released ahead of Super Tuesday, but those that were suggested Biden would win by a large margin.

And that suggestion was backed up by the state’s demographics and the concerns of Alabama Democrats, according to the University of Alabama’s Regina Wagner, an assistant professor of political science. Alabama’s electorate skews a bit older (with about 60 percent above the age of 45), was expected to be about 54 percent black, and it was known that the state’s Democratic voters are largely moderates with an eye on November.

Ultimately, Wagner said, Alabama Democrats would seek to make what they saw as the most pragmatic choice; many of them are eager to reelect Jones, a Democrat who defeated in a 2018 special election Republican Roy Moore, who was accused of preying on underage girls in his past.

Alabama Democratic primary voters, according to Wagner, voted while thinking the “state is going to go red on the presidential level either way, no matter who the presidential nominee is, but is someone going to damage my Senate candidate more or less.”

Jones is expected to face a tough general election fight against former Attorney General and Sen. Jeff Sessions, a popular figure in the state who’s expected to win a crowded GOP primary.

“The last time Jeff Sessions ran for reelection, he ran unopposed,” Wagner said. “If you have an eye on that, you will probably say, ‘Well, none of these national Democrats will help [Jones], but which one will harm him the least? … If I’m trying to get Doug Jones elected, what is going to give Republicans the least ammunition against him? What’s going to make him least likely to have to constantly distance himself from his party?’”

Now they’ve made that choice, they’ll have to wait until November to see whether their pick pays off, both at the national level, but also in the Senate. “Democrats in the state, their perception is, ‘We need to win something,’” Wagner said.