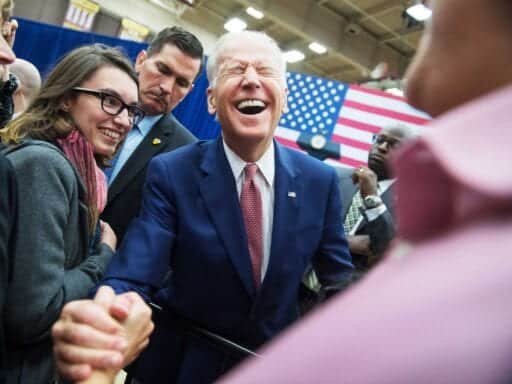 Biden landed a surprise victory in Minnesota after Amy Klobuchar backed out and endorsed him.

Joe Biden landed a surprise victory in the Minnesota primary on Tuesday, the day after home-state Sen. Amy Klobuchar withdrew from the race and endorsed the former vice president. In other words, Klobmentum became Joementum in the Gopher State.

In the weeks leading up to Super Tuesday, polling in Minnesota showed Klobuchar and Bernie Sanders leading the race. She led a Star Tribune-MPR News poll with 29 percent support, ahead of Sanders with 23 percent and Elizabeth Warren with 11 percent. And she was ahead in a UMass Lowell poll with 27 percent, compared to 21 percent for Sanders and 16 percent for Warren. With Klobuchar’s last-minute dropout, it was unclear where her supporters were going to go. But apparently, enough of them went to Biden. A Data for Progress poll released on Super Tuesday showed Sanders leading, followed by Biden and Warren.

Minnesota offers 75 pledged delegates out of the 1,991 needed to win the nomination, so it’s not the most important state in the primary. But it matters in the general election (more on that later).

As to what matters to voters in the state, nearly a quarter of respondents to the Star Tribune poll said health care was most important in their choice of a Democratic nominee, followed by the environment, income inequality, social justice reform, and education.

This year, Minnesota voters chose presidential contenders through a primary instead of a caucus. In 2016, so many people came out to caucus that some sites were overwhelmed. Voters waited in long lines, some precincts didn’t have enough ballots, and because of the chaos, some people just gave up and went home. So later that year, the state passed legislation to make the presidential contest into a more straightforward primary in hopes that it would be more accessible to voters and thus increase voter turnout. Minnesotans were also able to vote early and absentee.

Minnesota may not be the most make-or-break state in the primary, but it is a big deal in the general election. Hillary Clinton beat Donald Trump there in 2016 by just 1.5 points, and it marked the first time the state voted more Republican than the national vote since 1952. Trump has signaled he’s targeting the state in 2020, and while a slim majority of Minnesotans disapprove of the president, it’s not locked in for the Democratic nominee. The president sort of looks at it as the one that got away in 2016, when he won both Wisconsin and Michigan. In 2019, Vox’s Aaron Rupar dove into the president’s Minnesota plans and how likely they are to pan out:

Between that above-average performance in the blue state in 2016 and today’s bullish economy, it’s not absurd for Trump to think he could swing the state in 2020. But there are also good reasons to believe that whatever window Trump had to score an unlikely victory in Minnesota in 2016 has closed.

The takeaway: After Super Tuesday, Democrats and Republicans alike are probably going to be back in Minnesota a lot.

Why even a super-accurate Covid-19 test can fail
The Parent Trap, Meredith Blake, and the ongoing reclamation of “bitch”
“Obamagate”: Trump’s latest conspiracy theory, explained
It’s official: 2020 is the busiest Atlantic Hurricane Season on record
John McCain, who died at 81, explained
Saturday Night Live has elected its new Joe Biden