Joe Biden’s 1981 views on child care haven’t aged well. Gillibrand called him out on it. 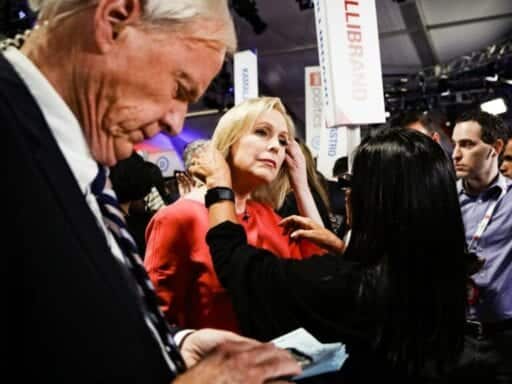 At Wednesday’s debate, Gillibrand brought up a 1981 op-ed in which Biden said expanding tax credits for child care would cause the “deterioration of the family.”

In the run-up to the second round of Democratic debates this week, rumors circulated that Sen. Kirsten Gillibrand was digging up opposition research on former Vice President Joe Biden.

On Wednesday night, she deployed it.

Gillibrand said that in an op-ed during his time in the Senate, Biden had argued “that women working outside the home would ‘create the deterioration of family.’”

“Under Vice President Biden’s analysis,” she asked, “am I serving in Congress resulting in the deterioration of the family?”

The op-ed in question, written in 1981, doesn’t exactly say that working women destroy families. But it does argue that day care centers are “monuments to our growing unwillingness to accept personal responsibility.” In a time when an increasing number of parents work outside the home — and several candidates have endorsed universal child care — Biden’s words feel dated at best. And he didn’t have a satisfying answer when asked about them.

Earlier this month, Axios reported that the Gillibrand campaign seemed to be looking into Biden’s 1981 vote against expanding the child care tax credit. That credit, at its current level, allows families to deduct child care expenses from their taxes, up to $3,000 per child.

In 1981, the Senate took up an amendment to expand the credit. As Amanda Terkel and Arthur Delaney report at HuffPost, Biden was the only senator who voted against it.

He didn’t object to the entire concept of expanding the credit, Terkel and Delaney note — he objected to the fact that the amendment would expand it for families making more than $30,000 a year (about $88,000 in today’s dollars). The amendment would also have made the credit refundable, allowing families to get money from it even if they didn’t owe taxes, but the issue of higher-income families was enough for Biden to vote no.

In the 1981 op-ed Gillibrand criticized, he explained why. A Gillibrand campaign spokesperson tweeted the op-ed on Wednesday night:

.@JoeBiden op-ed in 1981: Expanding the childcare tax credit and allowing more women to work would subsidize “the deterioration of the family.”

Those are his words. He should explain to America: How does a mom working lead to the deterioration of the family? pic.twitter.com/RADnzTbofx

In it, Biden writes, “a recent act of Congress puts the federal government in the position, through the tax codes, of subsidizing the deterioration of the family. That is tragic.”

That’s not exactly the same as saying that working women cause families to deteriorate. But Biden did have some harsh words for the concept of paid child care.

“I believe this issue is perfect example of the cancer of materialism that has stricken our society,” he writes. “We do not take care of our own families these days; we expect someone else to bear that responsibility.”

“The day-care centers and nursing homes blossoming across the American landscape are monuments to our growing unwillingness to accept personal responsibility for those to whom we owe the most,” he continued, “our children, our parents and our grandparents.”

It’s an argument that might concern child care providers in the United States today, a poorly paid and often underappreciated workforce who likely do not think of their jobs as a symptom of the downfall of society.

Biden did support expanding the tax credit for families making less than $30,000. And as Terkel and Delaney note, he had spent time as a single father after his wife and daughter died — he surely understood firsthand the difficulties of caring for children.

Still, he was an outlier in 1981 in voting against the amendment, and his arguments sound even more out of place now. As Terkel and Delaney note, child care responsibilities still fall disproportionately on mothers. They benefit when child care is affordable and accessible, and they lose out when it’s not. In a Center for American Progress poll, for example, 42 percent of mothers said they’d look for a higher-paying job if they had better access to child care.

That’s part of why multiple Democratic candidates, like Sens. Elizabeth Warren, Kamala Harris, and Bernie Sanders, support universal access to child care. Warren has released a detailed plan on the issue, making it a focus of her campaign.

Gillibrand, meanwhile, supports something Biden voted against in 1981 — expanding the child care tax credit. Specifically, she would double the maximum amount to $6,000 and make it fully refundable, so that even families who don’t owe taxes can get the money.

Others on the debate stage on Wednesday also talked about the importance of child care — Andrew Yang noted that his wife cares for their two sons at home. “What does her work count as in today’s economy?” he asked. “Zero. That’s the opposite of the truth.”

Rather than framing child care as personal responsibility, Yang was arguing it should be recognized as labor, and hinting that perhaps it should be compensated — something feminists have been advocating for decades.

Biden’s position has changed, but he didn’t explain why

Biden, for his part, has not released a formal child care plan, though he has backed universal preschool. And he now supports an expanded tax credit for child care.

He mentioned that in his response to Gillibrand, saying, “I support making sure that every single solitary person needing child care get an $8,000 tax credit now.”

But Gillibrand pressed him. “Most women have to work to provide for kids. Many women want to be working to provide for their communities and to help people,” she said. “Either you don’t believe it today, or what did you mean when you said it then?”

In response, Biden said that both his late wife and his current wife worked outside the home, and that he’d worked on multiple legislative efforts to benefit women’s rights. “I wrote the Violence Against Women Act,” he said — something he’s brought up in the past when challenged on issues affecting women.

But he didn’t really address the substance of the op-ed; he didn’t say what had changed his mind about personal responsibility or the role of day care in the “deterioration of the family.”

Biden has a decades-long history in government, and he’s taken many positions he later reversed. Immediately after his exchange with Gillibrand, Harris questioned him on his recent flip-flop on the Hyde Amendment, which bans federal funding for most abortions. But so far, he’s yet to develop an effective strategy for explaining to voters how he’s changed — and why.

“Texodus,” House Democrats’ favorite new 2020 phenomenon, explained
Trump’s plan to weaponize the census against immigrants has failed
Tens of thousands rise up against the coup in Myanmar
Call it authoritarianism
The Trump administration’s attack on children’s health protections
How the 5G coronavirus conspiracy theory went from fringe to mainstream