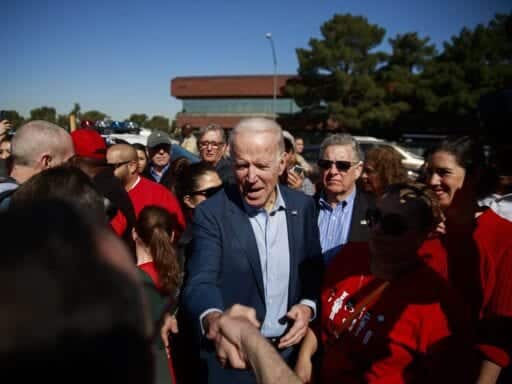 Six southern states will vote on Super Tuesday, and Biden leads in five of them.

The victory, which marked Biden’s first win of the primary season, gave new life to his struggling campaign. And it was a result that suggests he may be poised to perform well in a number of states with similar demographics on Super Tuesday — when a third of the primary’s delegates are up for grabs.

Historically speaking, South Carolina is an important bellwether state in presidential primaries, because it is typically a strong predictor of how other southern states with large African American populations like Alabama and Louisiana will vote. Biden won South Carolina in large part because he won 61 percent of the black vote there, and has long said he sees black voters are the foundation of his base of support.

While the race is still unfolding, there is some evidence beyond South Carolina’s results to suggest that claim is true — Biden performed strongly among black voters in Nevada, who helped him to his second place finish there, and is polling well in other states in which black voters make up a large share of the electorate.

If Biden sweeps the South by a large margin on Tuesday, it could revive what was increasingly looking like a quixotic bid for the White House, and once again make him the most viable moderate contender for the nomination.

But Super Tuesday could also deal him — and every other candidate in the race — a nearly lethal blow: Should Sanders dominate the contests that day, especially in California and Texas, the delegates the senator would receive from those victories could eclipse any strong performance that Biden puts up in the South.

What South Carolina tells us about contests to come

Biden’s victory in South Carolina helped put an end to a streak of underwhelming performances. It wasn’t just his first primary win in 2020 — it was the first primary he’s won in three bids for the White House over the course of his political career.

But the real reason that South Carolina matters is what it says about the future: it often provides foreshadowing of how Democrats in the South (especially black Democrats) are thinking about presidential candidates. As Vox’s Li Zhou explains, the state reflects, and likely influences, voter decision-making throughout the region:

Historically, at least four Southern states — Alabama, Louisiana, Georgia, and Mississippi — have voted for the same Democratic nominee as South Carolina, giving this candidate a windfall of delegates. Democratic strategist Antjuan Seawright attributes this trend to the fact that many of these states have similar demographics as South Carolina’s electorate, which in addition to being majority African American is also majority women.

“Right after South Carolina, a lot of Southern states with similar demographics hold contests,” says Gibbs Knotts, a College of Charleston political science professor and author of First in the South, a book dedicated to examining the role of the state’s primary.

This cycle, in particular, given the size of the Democratic field, the state is poised to help with the winnowing process and clearly indicate who will perform well in diverse states.

“If you cannot pick up black support in South Carolina, how the hell are you going to get it three days later elsewhere?” says [Democratic strategist Clay] Middleton.

Biden’s odds of performing strongly in the South are high. According to FiveThirtyEight’s polling models, Biden is favored to win every Southern state on Super Tuesday except Texas.

For instance, Biden beat Sanders among black voters in the Nevada caucuses — who made up 11 percent of the electorate — by 10 percentage points. And in South Carolina, Biden received 61 percent of the black vote, while Sanders won just 16 percent.

If Biden continues to do well in states that have similar political and demographic landscapes to South Carolina, he could give his campaign a significant boost by locking down the South.

The South will help Biden, but won’t secure the nomination for him

On Super Tuesday, six southern states will be headed to the polls, and Biden is leading in the polls in almost all of them. In Alabama, North Carolina, Virginia, Tennessee, and Arkansas, Biden is the frontrunner. Combined, those states have 356 pledged delegates up for grabs.

But it’s important to remember Democratic primaries are not winner-take-all; should Biden win all of those states, he will have to split those delegates with any and all other candidates who receive more than 15 percent of the vote.

And Biden will face another big problem, even if he receives the majority of those 356 delegates: the combined delegate total of California and Texas. Sanders is leading in both those states, and they have 643 pledged delegates between them — almost double the amount of the southern states where Biden leads.

And that’s to say nothing of the delegates on offer in the other Super Tuesday states in which Sanders — or some other Biden rival — leads, including some states with very respectable delegate offerings like Massachusetts (91 delegates) and Colorado (67 delegates).

In other words, Biden’s strategy of winning the South may not advance his candidacy in and of itself. To remain a viable candidate, he will also need to do well enough in states Sanders currently leads to receive delegates. And even if the former vice president does so, if Sanders has a dominant performance on Tuesday, he could build up an insurmountable lead in the delegates, making it impossible for any candidate to catch up to him in the delegate count.

However if Sanders underperforms his polling, and if Biden does well, there is a chance for the former vice president to emerge as the main opposition to the Sanders insurgency — or at least to wound Sanders’s campaign enough that the senator falls short of a delegate majority before the Democratic National Convention in July.

DoorDash’s anti-worker tactics have backfired spectacularly
Class of 2021: Mondaire Jones on his “jarring” start as a first-term lawmaker
FBI agent Peter Strzok’s hearing has become a ridiculous circus
Who wants a teddy bear for Valentine’s Day?
Mitch McConnell’s filibustering could prompt Democrats to weigh chipping away at the filibuster
The Atlanta shootings can’t be divorced from racism and misogyny