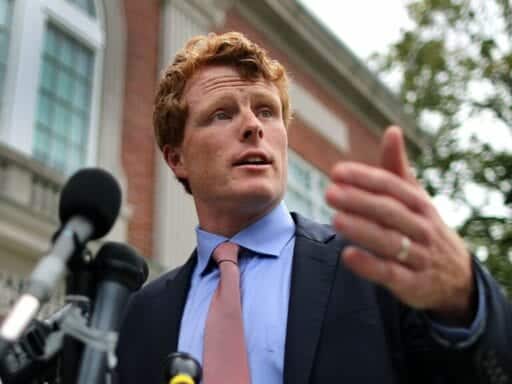 “It’s going to be a heavyweight slugfest.”

Joe Kennedy, a Massachusetts Congress member and scion of one of America’s most well-known political families, is officially levying a primary challenge against sitting Sen. Ed Markey.

“In this moment, we refuse to accept the status quo that tells us big things aren’t possible,” Kennedy said in his announcement video. “I’m running for Senate because this is the fight of our lives.”

Big news: I’m running for US Senate. This isn’t a time for waiting, for sitting on the sidelines, or for playing by rules that don’t work anymore. This is the fight of our lives, the fight of my generation — and I’m all in. I hope you’ll join me at https://t.co/7zwvI9aujq pic.twitter.com/WVkNLwCJbg

In its own statement earlier this week, Markey’s camp argued the senator has used his time in the upper chamber to advocate for the “big things” Kennedy referred to in his announcement, and that Markey plans to continue to do so in his current role: “From lowering drug prices for our seniors, to expanding opioid treatment and recovery services, to creating green jobs for our workers, Ed Markey is ready to continue the fight for Massachusetts.”

Personal ambitions aside, the case for Kennedy’s challenge to Markey isn’t immediately obvious since the two men don’t differ much ideologically. Markey is a well-liked progressive senator who was elected to the upper chamber in 2013 after serving in the House since 1976. Kennedy is also a well-liked, relatively progressive Congress member, who was first elected in 2012. Both are white men and both have deep ties to Massachusetts politics.

There are a few notable differences between the two, however, including age. Markey is 73; Kennedy is 38. And Kennedy, as he’s previously hinted, is arguing that he’s a better fit for the job in a moment when the party is facing immense pressure to do more to stand up to Republicans and confront political divides.

Kennedy’s decision to mull a Senate run comes amid a couple of different trends in Massachusetts where recently there’s been a spate of younger candidates upsetting older incumbents, including Rep. Ayanna Pressley, who notably defeated then-Rep. Mike Capuano. It’s also taking place as a lot of Massachusetts talent eyes a Senate run down the line, experts tell Vox. Taking on Markey might just be Kennedy’s best bet at securing a seat in the near future.

While a number of Democratic primary challenges in 2018 were driven by differences in ideology, that’s not quite the case with Kennedy and Markey. If anything, Markey is seen as the lawmaker with the more liberal voting record between the two, though Kennedy has also established himself as a progressive in the House.

On issues including climate change and net neutrality, Markey has been at the forefront of fights waged by the left. He was a co-sponsor of the Green New Deal resolution and was integral to advancing a cap-and-trade proposal while he was in the House. He has a consistent voting record on a range of issues including health care and Cabinet nominees.

“On policy, if you’re a progressive Democrat in Massachusetts, you like them both. Markey has a longer legislative history,” O’Brien says. “He’s known as a specialist in areas like the environment.”

Kennedy, meanwhile, has a similarly solid voting record in the House and is known for his work on LGBTQ rights and mental health. In speaking with Vox, Dewey Square political analyst Mary Anne Marsh specifically cited Kennedy’s efforts on a statewide ballot initiative focused on transgender rights as an example of how engaged he’s been in Massachusetts politics.

Between the two, Kennedy could face some pushback from progressives once a full challenge is underway. Already, several regional lawmakers, including Sen. Elizabeth Warren, have expressed their endorsements for Markey. And the left-leaning think tank Data for Progress has questioned Kennedy’s progressive bona fides given past stances on Medicare-for-all and legalizing marijuana. Noted progressive Rep. Alexandria Ocasio-Cortez (D-NY) is among those supporting Markey, while the more centrist Sen. Kyrsten Sinema has vocalized her endorsement for Kennedy.

Ultimately, however, the two lawmakers are nearly in lockstep with one another. “This is less about ideology and more about effectiveness,” says Marsh. “Only in Massachusetts could you split those hairs.”

This question of effectiveness is one that Kennedy seems determined to probe as part of a potential run.

“Our system has been letting down a lot of people for a long time, and we can’t fix it if we don’t challenge it,” he wrote on Facebook. It’s an issue that’s become more urgent since Trump took office, says Marsh, and it’s one that takes direct aim at Markey, who has decent approval ratings but lukewarm voter support.

According to a Boston Globe and Suffolk University poll that was conducted in June, 44 percent of likely Democratic voters say they’ll back Markey in a primary while another 45 percent are undecided about whom they would pick. While Markey is seen as a dedicated public servant who’s put in the work, he’s not viewed as a candidate who’s incited a ton of passion from voters.

“Markey is one of the most popular senators nationwide, but people don’t really know much about him,” says Shannon Jenkins, a political science professor at UMass Dartmouth.

“His cardinal sin is he’s kind of boring,” says O’Brien.

Kennedy’s case for his candidacy hinges on the argument that he’s best poised to make a difference in the Senate and take on Republicans. “What is different is Donald Trump and our democracy has forced everyone to say: Am I doing enough to stop him?” says Marsh. “Joe Kennedy thinks he can do more.”

Kennedy’s bid is also actively pushing back on the deep-rooted idea of “seniority” in politics. In both the Senate and the House, for example, lawmakers are expected to put in the time before they are able to advance to a more senior position on a committee or in leadership. Similarly, Markey is seen as someone who waited his turn before making the jump from the House to the Senate.

Kennedy is arguing that he’s done waiting, a statement that’s very much in line with younger candidates taking on incumbents in Massachusetts. In addition to Pressley, Rep. Seth Moulton, 40, won the seat of then-Rep. John Tierney in 2014. And there’s speculation that Boston City Councilor Michelle Wu, 34, could be weighing a challenge to incumbent Mayor Marty Walsh.

“We’ve had a series of races where people aren’t waiting their turn anymore. They are taking on established incumbents and being successful,” says Marsh.

Kennedy could well position himself as part of this wave, a movement that’s taken hold nationwide as voters call for fresh voices in politics. “I hear the folks who say I should wait my turn, but with due respect — I’m not sure this is a moment for waiting,” Kennedy writes. (It’s of course worth noting that Kennedy’s family ties set him apart from other candidates who’ve made similar arguments.)

“I think I’ve got new ideas and a new approach. And, if I get into this race, that’s what this race will be about,” Kennedy told reporters in Boston on Tuesday.

Kennedy could also offer the state a higher profile that he’s built up due to both his own record and his family’s legacy. Experts say that he’s well liked in the state and is not seen as having coasted off his last name. His rebuttal to Trump’s 2018 State of the Union address, which took on the “false choices” the administration was pushing on everything from immigration to gun control, was well received by many Democrats on the national stage.

And being a Kennedy in a state where Sen. Ted Kennedy served for almost five decades until his death in 2009 continues to carry significant weight.

“He is a Kennedy, and in Massachusetts, that still means something,” Jenkins told Vox. “There is nostalgia with a certain set of voters and instant name recognition.”

The competition in Massachusetts is quite fierce, and this could be Kennedy’s best shot at the Senate for a while

Leaked polling from Kennedy’s camp revealed that he currently has an edge on Markey, and experts predict he’d probably have a lead in early public polling on the race. With Kennedy’s entry, Markey could be facing the “toughest race he’s ever [encountered],” says Marsh.

A major reason for Kennedy’s decision to mount a challenge now could be driven by the fact that Markey would be his most accessible opponent in the near future. Both O’Brien and Jenkins note that there’s a pretty deep bench of Massachusetts lawmakers who could vie for another Senate seat down the line if Warren’s were to open up, for example. Those younger, similarly progressive lawmakers might prove to be tougher opponents than Markey currently is.

“Kennedy is doing this now because there’s a total logjam of talent in Massachusetts,” O’Brien told Vox, citing other lawmakers like Pressley, Rep. Katherine Clark, Massachusetts Attorney General Maura Healey, and even Moulton, who might go up against Kennedy in another race.

“He knows those other four or five would be tough to beat,” she says.

“There’s always a real bottleneck in Massachusetts for a Democratic Senate seat,” adds Jenkins. “If it’s an open seat, it’s a very crowded field and you also have to go to run against Republicans.”

That’s not to say that there aren’t other people currently interested in primarying Markey. In addition to Kennedy’s potential candidacy, former Walgreens executive Steve Pemberton and labor lawyer Shannon Liss-Riordan have declared their intentions to run.

Of the field so far, however, Kennedy is the most well known.

“If this goes the distance, it’s going to be a heavyweight slugfest,” says Marsh.