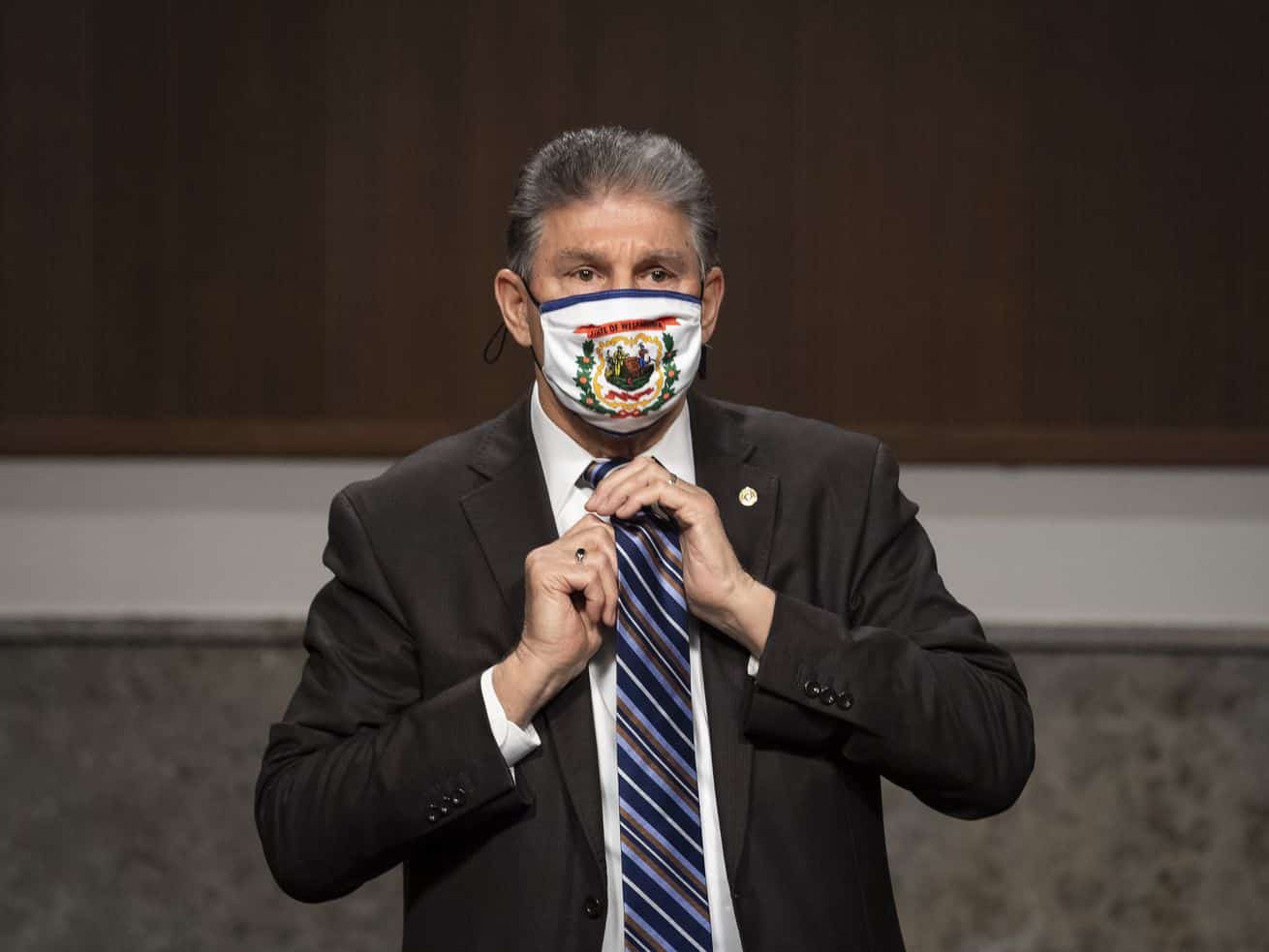 Sen. Manchin’s suggestion for changing the filibuster: “Make them stand there and talk.”

On Sunday, Sen. Joe Manchin (D-WV), a longtime defender of the filibuster, signaled that he might nevertheless be open to filibuster reforms that could make it easier for Democrats to advance their legislative agenda.

In a series of television interviews, Manchin emphasized his support for the filibuster rule, which effectively imposes a 60-vote threshold for most legislative action in the Senate. But he told Meet the Press host Chuck Todd that “if you want to make [filibustering] a little bit more painful — make them stand there and talk — I’m willing to look at any way we can.”

He also reiterated that same point elsewhere on Sunday, telling Chris Wallace on Fox News Sunday that “[the filibuster] should be painful if you want to use it.”

Joe Manchin tells Chris Wallace that while he supports the filibuster, he thinks “it should be painful” if senators want to use it pic.twitter.com/7g3t6Vys32

That may not sound like a big deal, but it is: As Politico reporter Andrew Desiderio pointed out on Twitter Sunday, what Manchin appears to be describing is a throwback to the “talking filibuster,” which would likely pose a much more surmountable obstacle to the narrow Democratic Senate majority.

What he’s referring to here is the “talking filibuster,” whereby a member of the minority party can filibuster as long as he/she stays put on the floor. Once he/she relents, there’d be a vote at a simple majority threshold. https://t.co/YkzdcSTXOX

As Desiderio explained, under a “talking filibuster,” any “member of the minority party can filibuster as long as he/she stays put on the floor.” But once a member finishes speaking, the filibuster would end, and “there’d be a vote at a simple majority threshold” of 50 votes, instead of the existing 60-vote threshold required to end a filibuster.

That’s a big change, because there’s currently no actual filibustering required to filibuster in the Senate, at least not in the conventional sense. As Vox explained back in 2015, the modern filibuster doesn’t require a senator talking on the floor for hours on end to delay a bill.

Instead, today’s filibuster is a straightforward move to reject unanimous consent on a bill that the minority can wield painlessly: According to former Vox writer Ezra Klein, “Today’s filibusters simply paralyze the Senate until the majority either finds 60 votes to proceed or gives up and moves on to another piece of business.”

If that rule were changed, though — say, by going back to the talking filibuster of yore — filibusters might only paralyze the Senate until the minority runs out of members willing to hold the floor.

Support for the talking filibuster isn’t really a new position for Manchin either, as Desiderio points out: In 2011, Manchin backed a similar, unsuccessful measure that would have “required that Senators who wish to filibuster a bill must actually take the floor and make remarks.”

As things stand, the filibuster doesn’t affect all Senate business — judicial nominations, for example, are only subject to a simple 50-vote majority, as are Cabinet appointments — but it does limit most legislation. The one notable exception to that rule is the budget reconciliation process, which Democrats are on the verge of using to pass a $1.9 trillion stimulus package into law this week. But reconciliation is also an arcane, limited process that would be incompatible with many Democratic priorities under current congressional rules.

Despite being the very thing that imposes a 60-vote threshold on much Senate business, the filibuster itself isn’t subject to the same threshold. If the current Democratic caucus majority in the Senate — with its 50 votes, plus Vice President Kamala Harris as the tie-breaker — wanted to eliminate the filibuster altogether, it could do so.

It won’t, unless Manchin and other moderates have a dramatic change of heart — but Manchin’s comments are a reminder that Democrats could still use their majority to find a way around the filibuster if their members aren’t willing to end it outright.

Obviously, Manchin’s comments Sunday aren’t a definite commitment to do something about the filibuster — but they’re still extremely good news for Democrats, who appear as if they will soon face a string of futile fights to win over 10 Republican votes for priorities like voting rights and a minimum wage increase.

Specifically, Manchin’s change in tone, though slight, comes as Senate Democrats prepare for a fight over a voting rights package recently passed by the House of Representatives, and as high-profile party leaders begin to get behind ditching the filibuster.

In an interview this week, for example, House Majority Whip Jim Clyburn told the Guardian that “there’s no way under the sun that in 2021 that we are going to allow the filibuster to be used to deny voting rights.”

“Here we are talking about the Voting Rights Act [late Rep. John Lewis] worked so hard for and that’s named in his honor and they’re going to filibuster it to death?” Clyburn said. “That ain’t gonna happen.”

As a member of the House rather than the Senate, Clyburn himself has no say over the fate of the filibuster, but he’s still an influential, longtime leader in Congress. And he’s not alone in arguing for change: Just this past week, several Senate Democrats indicated they would also be open to abolishing the filibuster to clear the way for priorities like voting rights.

‼️Another major one. In addition to being from a key swing state, Stabenow is the fourth-ranking Senate Democratic leader and chair of the DPCC, the caucus’ policy and messaging arm. And just generally viewed as a very smart and savvy senator by her colleagues. https://t.co/N2bnjAIz89

Despite some movement within the Democratic caucus, the path to filibuster elimination — or even reform — still isn’t exactly clear. Democrats would need all 50 members of their majority to make it happen, and Manchin’s comments Sunday confirm that he’s still in the “hard no” camp on abolishing the filibuster, as is Arizona Sen. Krysten Sinema, who has staked out an aggressively pro-filibuster position.

If the Democratic Senate majority does decide to take action though, there are lots of things they could do short of blowing up the filibuster for good. As Vox’s Ian Millhiser wrote last month, with just 50 votes and Harris to break the tie, Democrats could limit which bills are subject to the filibuster, make it harder to filibuster a bill in the first place, or reduce the cloture threshold in the Senate.

On Meet the Press Sunday, Manchin indicated some willingness to consider that first option, in addition to a talking filibuster, telling Todd he might be open “to a reconciliation” style approach for passing bills if Democrats are met with repeated refusals from Manchin’s “Republican friends” to work together.

According to some Democrats, such as Clyburn, changing the filibuster is vital to the future not just of the Biden administration’s legislative agenda, but to the Democratic Party’s ability to compete in future elections.

“If Manchin and Sinema enjoy being in the majority,” Clyburn told the Guardian, “They had better figure out a way to get around the filibuster when it comes to voting and civil rights.”

Schiff ends day in the impeachment trial by telling the Senate, “If right doesn’t matter, we’re lost...
What the new stimulus money means for small business loan programs
A new study from Rwanda is the latest evidence for just giving people money
After Pittsburgh, the interfaith response sends message of solidarity across the religious divide
John McCain will be honored in Arizona, Washington, DC, and Annapolis
Donald Trump, the resistance, and the limits of normcore politics