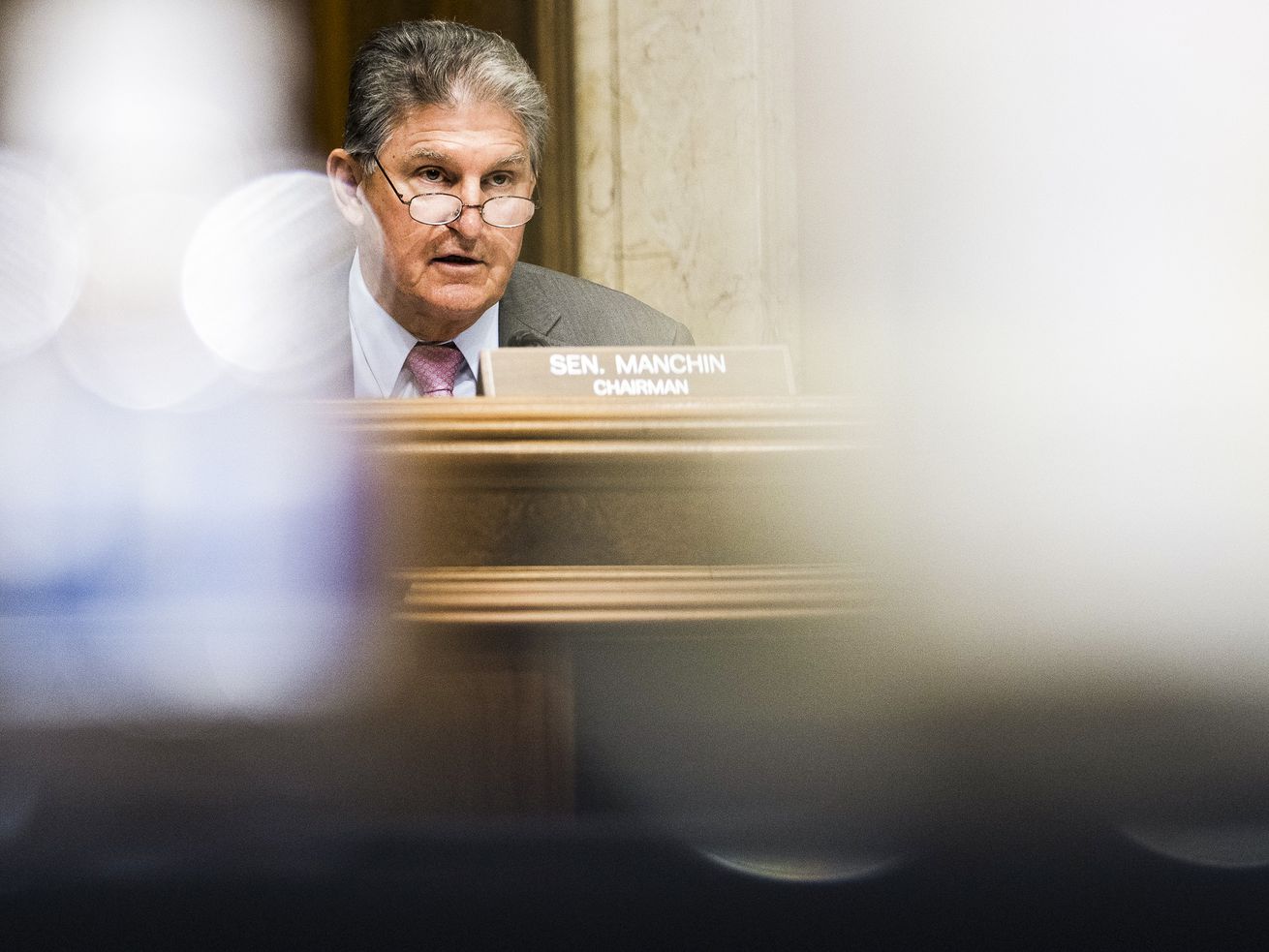 The pivotal senator has released a potentially transformative plan to promote fair elections.

No voting rights bill will become law without Sen. Joe Manchin’s (D-WV) approval, at least in the current Congress. The conservative Democrat is the median vote in the Senate, and he’s a frequent source of frustration for other members of his party. Earlier this month, Manchin came out against the For the People Act, a comprehensive voting rights bill backed by Democratic leadership, effectively killing any hope that the bill could become law during the current Congress.

But on Wednesday, Manchin did something unexpected: He released a long list of voting reforms that he does support, potentially scrambling the congressional debate over voting rights as the Senate prepares to vote on Democratic leaders’ proposal.

Manchin’s list includes many reforms drawn from the For the People Act as well as from a companion voting rights bill known as the John Lewis Voting Rights Act. Significantly, Manchin endorsed banning partisan gerrymandering — a high priority for both small-d democrats and large-D Democrats, who want to prevent the GOP from seizing control of the House of Representatives with rigged congressional maps.

Not everything on Manchin’s list will delight his fellow Democrats. He proposes a nationwide voter ID law, for example, although not an especially strict one. And he wants states to be able to engage in “maintenance of voter rolls”— purging names from the state’s list of registered voters — using state and federal documents to identify which voters should be purged.

The West Virginia senator’s proposal, in other words, falls short of the dreams of Democratic leaders and voting rights advocates who rallied behind the For the People Act, which passed the House in March. And it is still almost certainly doomed unless Manchin agrees to eliminate the GOP minority’s ability to filibuster voting rights bills — a move Manchin has thus far rejected — or somehow miraculously musters support from 10 Republicans (in addition to all 50 Democrats).

But Democrats and other supporters of democracy would have a great deal to celebrate if Manchin’s list of proposed reforms did become law. And his decision to release such a comprehensive and well-thought-out list of proposals should give some hope to reformers, as it suggests Manchin does want to pass a voting rights bill — even if it isn’t the specific bill that many advocates want.

Manchin’s list of reforms is quite long. It combines more than two dozen itemized proposals, including making Election Day a national holiday, requiring states to notify voters if their polling place is moved close to an election, providing more robust disclosures of campaign finances, and a requirement that all candidates for president or vice president disclose their tax forms.

The most significant proposal on the list is a ban on partisan gerrymandering, at least at the congressional level. States are required to redraw their legislative maps every 10 years to account for shifting population, and the latest redistricting cycle is about to begin. Republicans are expected to benefit from this process, in part because they control important high-population states, such as Texas and Florida, and in part because many large blue states, such as California, use independent redistricting commissions to draw legislative lines.

Shortly before the last redistricting cycle, Republicans won crushing victories in the 2010 midterm elections, allowing them to draw very potent gerrymanders in many states. Indeed, these maps were so potent that Democrats might have needed to win the national popular vote by as much as 7 percentage points in 2012 (the first election conducted under the 2010 maps) in order to carry the House.

This time around, Republicans probably won’t be able to give themselves quite as much of an advantage — Democrats control several key governor’s mansions and will likely be able to veto gerrymandered maps, and several states have reformed their redistricting process since 2010. But, even if Republicans only hold a 3- or 4-point advantage in 2022, that’s still a significant skew that could potentially allow the GOP to capture the House without winning the popular vote.

Beyond gerrymandering, Manchin also supports several fairly modest proposals that are likely to make it easier to vote in many states. He would allow voters who show up at the wrong polling place on Election Day to still cast a ballot, although these voters might not be allowed to vote in certain local elections. And he would require at least 15 consecutive days of early voting in federal elections.

He would also make some fairly significant changes to the John Lewis Act, which seeks to restore a practice known as “preclearance.”

Preclearance blocked any new election rule enacted by a state and local government with a history of racist election practices until that law was approved by either a federal court in Washington or the Department of Justice. The Supreme Court effectively halted preclearance in its 5-4 decision in Shelby County v. Holder (2013).

Last month, Manchin seemed to propose extending this preclearance regime to all 50 states, but that idea did not make the senator’s most recent list of reforms. Instead, Manchin now seems to endorse most of the John Lewis Act, which would impose preclearance on jurisdictions that have committed “15 or more voting rights violations … during the previous 25 calendar years” or on jurisdictions with 10 or more violations, “at least one of which was committed by the State itself.”

But Manchin also would weaken a few provisions of the John Lewis Act. He would “decrease the Attorney General’s authority to deem a state or locality’s actions a voting rights violation,” suggesting that courts and not the Justice Department would play an enhanced role in determining which states are subject to preclearance.

He also wouldn’t allow consent decrees — negotiated settlements between a plaintiff and a jurisdiction accused of voting rights violations — to count toward the violations that could subject a new jurisdiction to preclearance. Manchin says he’s afraid that “savvy lawyers could go into cash strapped localities” and file suits that those localities can’t afford to defend. Then use the resulting lawsuit settlements to “rack up voting rights violations to get a locality or state into preclearance.”

Additionally, Manchin raises a few other vague concerns, such as “there needs to be clarity on how states or localities exist out of preclearance.” It’s likely that Manchin’s version of the John Lewis Act would be substantially weaker than the Democratic leadership’s proposal. Nevertheless, because the status quo is Shelby County, which struck down preclearance, Manchin’s proposal would revive a potent tool that has historically been very successful in protecting voting rights.

What’s in it for Republicans?

Manchin has suggested that any voting rights reforms must be bipartisan, and he’s resisted filibuster reform in the past. So even Manchin’s somewhat watered-down voting rights proposals face a tough road in the Senate unless he’s willing to reconsider his desire to secure Republican votes.

That said, Manchin’s proposal does include a few ideas that may prove enticing to some GOP senators.

He would impose a nationwide voter ID requirement — meaning voters would be required to show some form of identification before casting a ballot. Such laws enjoy broad support from Republicans, who often claim they are necessary to combat voter fraud.

In reality, such fraud is virtually nonexistent, and many voting rights advocates fear that voter ID prevents left-leaning groups, such as students, low-income voters, and voters of color, from casting a ballot because these groups are less likely to have ID.

New research, however, suggests that voter ID laws may not have much of an impact at all — that is, they neither prevent fraud nor do much to disenfranchise voters. And Manchin also proposes a fairly permissive form of voter ID. While some states have “strict” voter ID laws that require voters to show specific forms of photo identification, Manchin would permit voters to cast a ballot if they show alternative forms of ID, such as a utility bill with their name and address on it.

Indeed, depending on how the legislation is eventually drafted, Manchin’s voter ID proposal could potentially make it easier to vote in states with strict laws. Congress has the power to preempt state laws that conflict with federal law. So, if Congress passes a national law allowing voters to use alternative forms of ID like a utility bill, it could write that law to preempt stricter state laws.

The most worrisome aspect of Manchin’s proposal is probably the suggestion that states should be allowed to purge their voting rolls. Such purges are a fraught topic, because of concerns that states will erroneously (or intentionally) deregister voters who are still eligible to vote where they registered. In 2000, for example, the state of Florida conducted a deeply flawed voter purge that may have changed the result of that year’s presidential election — according to official tallies, George W. Bush won the state by only 537 votes.

In any event, Manchin’s proposal on voter purges is quite vague — he says he would “allow for maintenance of voter rolls by utilizing information derived from state and federal documents” — so it’s hard to know whether a more fleshed-out proposal will be deeply alarming or largely benign until Manchin provides more specifics.

Yet, even if some of these ideas do appeal to Republicans, the path to 10 GOP votes seems incredibly steep. And it’s not hard to see why: While it’s a step down from the For the People Act, the totality of Manchin’s proposal is still an enormous win for voting rights, so much so that it would be easy to see why a GOP that has gone all in on Trump’s election lie would reject it out of hand.

Now that Manchin has made his affirmative demands on voting rights explicit, the big question is this: What is he willing to do to make sure the proposals he champions become law?

Donald Trump spent Saturday retweeting far-right personalities. Then he told them they’re right.
Vox Sentences: Mar-a-Lag-Oh-No
What we know about a shooting, stabbing, and fire in Honolulu, Hawaii
Trump is farming out one of the hardest parts of the job to the vice president
Democrats capture Georgia US House seat held by Republicans since 1995
The risks of going too big on stimulus are real — but going too small could be riskier