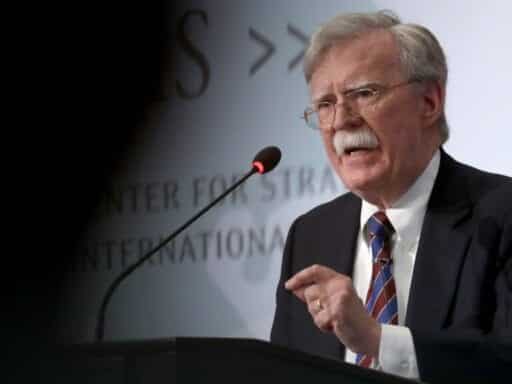 Bolton slams Trump in his first public remarks since leaving the White House.

John Bolton was fired less than three weeks ago as national security adviser — and he’s already starting to fire back at President Donald Trump by blowing a hole in the administration’s North Korea policy.

In his first public remarks since his ouster, Bolton openly and repeatedly disagreed with Trump’s approach toward Pyongyang, albeit without ever mentioning the president’s name.

His most damaging comments came right at the beginning when he said the administration’s main assertion — that North Korean leader Kim Jong Un is ready and willing to give up his nuclear weapons — isn’t the case.

“It seems to me clear that [North Korea] has not made a strategic decision to give up its nuclear weapons,” Bolton told an audience at the Center for Strategic and International Studies think tank in Washington on Monday. “In fact, I think the contrary is true. In fact, the strategic decision that Kim Jong Un is operating through is that he will do whatever he can to keep a deliverable nuclear weapons capability and to develop and enhance it further.”

Bolton is basically saying there’s no chance Trump can convince Kim to dismantle his nuclear arsenal and that Kim is only improving his program as the US struggles to make a deal with North Korea.

It’s a significant statement. While he’s long been hawkish on North Korea, it’s worth remembering that Bolton recently had access to America’s most sensitive intelligence. What’s more, the US intelligence community assesses that North Korea is unlikely to give up its nukes.

So Bolton’s comments go to the heart of Trump’s diplomacy with Kim. The point of the two leaders meeting three separate times — and Trump becoming the first sitting president to step foot in North Korea — is to convince the dictator to dismantle his nuclear program. If that’s not possible, then it’s unclear why Trump gives Kim so much of his attention.

Without coming out and saying it, Bolton effectively called the president’s policy foolish — and potentially dangerous.

Bolton was always more hawkish than Trump. Before joining the administration in April 2018, he had already gone on the record advocating for using military force against North Korea because of its growing nuclear capabilities.

It was therefore expected that Bolton would disagree with Trump’s policy. But his Monday speech made clear just how wide the gap between his and the president’s views are — and explains in part why the administration’s North Korea policy has seemed so disjointed in recent months.

First, Bolton said that North Korea is violating UN agreements when it tests short-range missiles — and thus the US should condemn the country when it carries out those tests.

Trump agrees that Kim is breaking UN rules with those tests, but he maintains that they don’t break his personal agreement with the dictator. As long as Pyongyang doesn’t detonate a nuclear bomb or fire off long-range missiles, Trump says, all’s well.

Second, Bolton said the threat from North Korea is so grave that time is running out to do anything about its growing nuclear strength. That’s anathema to the Trump view that there’s no rush to sign a deal as long as Kim doesn’t start testing long-range missiles or nuclear bombs again.

Third, Bolton lamented that the US and South Korea aren’t conducting larger-scale joint military drills as they have in the past. Trump minimized those military exercises as a concession to North Korea since Pyongyang sees those exercises as training for a future US invasion.

The president also likes to keep the exercises small because he doesn’t want the US to spend as much money on Seoul’s security.

But Bolton expressed concern that American and South Korean military readiness — that is, the ability of their troops to fight a war together — dwindles by the day if they don’t continuously train.

Put together, Bolton’s remarks were a frontal assault on Trump’s handling of North Korea.

For some, his remarks showed that he tried to poison the well of the diplomatic moment. “I’m glad this cancerous tumor is outside the US government and not rotting our policy process from within,” Mintaro Oba, a former State Department official working on North Korea, told NK News after the speech.

Others, though, still found merits in Bolton’s comments, if anything to better understand the advice he gave Trump. And while he may not have spoken of his time in the administration or his discussions with the president, it’s more evident than ever that he was — and still is — at odds with this White House.

Facebook bans Alex Jones, Infowars, Louis Farrakhan, and others it deems “dangerous”
Trump will reunite separated families — but only if they agree to deportation
How the Nevada Democratic caucuses will work
The ethics of deliberately infecting volunteers with Covid-19 to test vaccines
Poll: Americans are afraid of ending the coronavirus lockdowns too soon
Audience reviews on Rotten Tomatoes are easily manipulated. That’s about to change.