John Bolton is out. Let the era of Trump Alone begin. 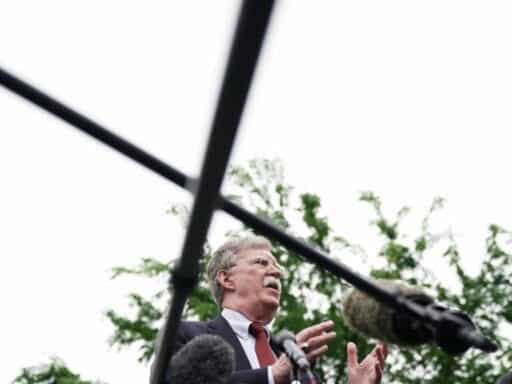 The Bolton-Trump partnership was never built to last.

National Security Adviser John Bolton is leaving his post after President Donald Trump told him to resign — a move that shows the president is firmly in control of his foreign policy.

Bolton is now the third national security adviser to leave Trump’s side, following in the footsteps of Michael Flynn and H.R. McMaster. But unlike those two, Bolton was never expected to last particularly long in the job given how starkly different many of his views on foreign policy are from the president’s.

Whereas Trump campaigned on getting the US out of costly foreign wars and keeping America out of new ones, Bolton was a key architect of the 2003 Iraq War and has long advocated for US-led regime change in countries from the Middle East to Asia to Latin America.

And sure enough, as many expected, that incongruity produced friction between the two men numerous times on major foreign policy issues including North Korea, Iran, and Venezuela.

Now, though, Bolton has finally wore out his welcome with the president.

….I asked John for his resignation, which was given to me this morning. I thank John very much for his service. I will be naming a new National Security Advisor next week.

I offered to resign last night and President Trump said, “Let’s talk about it tomorrow.”

The first big rift between Trump and Bolton came on North Korea.

Bolton — who’d had extremely combative interactions with Pyongyang during his time in the Bush administration and who has advocated carrying out preemptive airstrikes against the country’s nuclear facilities — pushed for the Trump administration to take a pugnacious approach toward Kim Jong Un.

That soon put him at odds with Trump when the president began efforts to engage in direct face-to-face negotiations with the North Korean leader. Trump has consistently ignored Bolton’s advice and met with Kim multiple times, saying he is in no rush to strike a deal with Kim. Meanwhile, Bolton has worked behind the scenes to scuttle progress on the talks, including working against Stephen Biegun, the special envoy for North Korea negotiations.

On Venezuela, Bolton helped orchestrate a campaign to remove President Nicolás Maduro from power. Trump reportedly agreed to the effort — which meant backing opposition figure Juan Guaidó as the country’s true leader and imposing sanctions on Maduro’s regime — because Bolton and others convinced him the dictator would fall rapidly.

Flash forward half a year later, and that has yet to happen — and it doesn’t look like it will anytime soon. Trump has seemingly lost patience with the anti-Maduro scheme, leaving the situation Bolton helped create to fester in a strange sort of limbo.

Bolton was even sidelined during negotiations with the Taliban on how to end the war in Afghanistan. He didn’t attend crucial meetings leading up to a failed summit at Camp David at was openly at odds with Secretary of State Mike Pompeo.

Most importantly, though, Trump and Bolton clashed on Iran. They both favor a tough stance toward the Islamic Republic. But they differ significantly on what the end goal of that policy approach should be and what tools should be used to get there.

Trump has said repeatedly that his goal is to negotiate a new, better deal with Iran to replace the “rotten” Obama-era nuclear deal, which Trump has long criticized for not going far enough in restricting the country’s nuclear program and not addressing other aspects of Iran’s behavior, including its ballistic missile program and support for terrorism throughout the Middle East.

Economic sanctions have been the president’s primary tool for trying to achieve that objective — the theory being that the crushing sanctions will hurt Iran’s economy so much that it will eventually choose to come to the negotiating table in order to get relief from the sanctions.

But negotiating a “better” deal with Iran, as difficult if not impossible as that would be, is still a far more modest goal than what Bolton wants: to topple the entire Iranian regime and replace it with a friendlier one.

And while sanctions are certainly one of the tools Bolton would likely to use to achieve that, he has never been shy about his willingness (if not outright desire) to use military force to bring down the regime.

As I’ve explained previously, a US intervention to topple the Iranian regime would be a massive military undertaking that would dwarf the 2003 Iraq War.

That is precisely the sort of foreign military adventurism Trump campaigned against and continues to reject. Though Trump has signaled in recent weeks that he’s willing to use military force against Iran if it were to attack the US, he has said over and over that he does not want a war with Iran.

It’s this disconnect between the policy goals of the president and those of his national security adviser that explain, at least in part, why the administration’s Iran policy has seemed so disjointed — and why Trump may have finally soured on his hawkish adviser.

It seems Trump has had enough of it.

Bolton’s departure from the administration is just further confirmation that although the president is willing to take advice from those around him, in the end US foreign policy will be whatever Trump himself wants it to be.

Not even a bureaucratic infighter and political maneuverer like Bolton could change that.

3 European countries are about to lift their lockdowns
An Arizona woman needed a drug to induce a miscarriage. Her pharmacist refused.
California has been passing tough animal welfare laws. A court just handed the state a big victory.
The Trump-Ukraine whistleblower complaint, explained
“You think about what marriage has become”: 4 couples on having virtual weddings
Exclusive: A new Senate plan would guarantee paychecks for workers who are furloughed or laid off