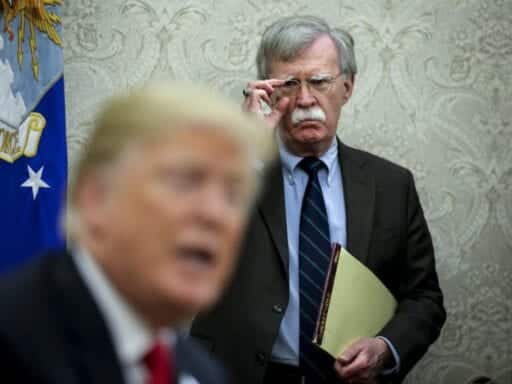 Share
Loading...
Former National Security Adviser John Bolton, attends a meeting with President Donald Trump in the Oval Office on September 28, 2018 in Washington, DC. He failed in his many attempts to get the president to go to war. | Oliver Contreras/The Washington Post via Getty Images

There was always going to be a conflict between Trump’s “America First” and Bolton’s “America Everywhere.”

John Bolton’s ouster as President Donald Trump’s national security adviser reveals something important: Even the deepest Washington insider and pro-war advocate can fail to push this commander in chief to start a major conflict.

When Bolton joined the administration in April 2018, the worry was that the arch nationalist hawk would convince the war-averse Trump to see the world as he did. Here was a guy who for decades called for bombing North Korea and Iran, exercising unilateral American power around the world, and cutting tethers to international institutions.

Bolton actually had a thought-out worldview that in many ways mirrored Trump’s. The question was if the top aide could channel the president’s instincts into actions that he has long wanted an administration to embrace.

In some cases, he succeeded. Trump last year withdrew the US from the Iran nuclear deal, an agreement Bolton railed against and wanted torn apart since Barack Obama signed it. And this year the president backed an effort to remove Venezuelan President Nicolás Maduro — a socialist dictator that Bolton has repeatedly criticized — from power.

But Bolton is most known for openly and passionately calling on the US to bomb nations he deems irredeemably dangerous. North Korea and Iran held a special place in his heart, writing that America should attack them for pursuing nuclear weapons and even advocating regime change. Doves worried aloud that missiles would start flying soon after Bolton stepped foot inside the Oval Office.

It wasn’t to be, thankfully.

“I’m the one that tempers him”

Despite Bolton’s best efforts, Trump pursued diplomatic talks with North Korea and resisted escalating tensions despite a resumption in missile tests over the last few weeks. And even after reimposing crushing sanctions on Iran, Trump repeatedly said he’d be willing to negotiate a “better” nuclear deal with the Islamic Republic’s top officials.

There’s little indication Trump wants to ignite another war in the Middle East despite his tough Iran stance. In fact, the Washington Post reported Tuesday that Bolton was “devastated” Trump chose not to attack Iran after it downed an American surveillance drone in June.

Which means that Bolton surely got to Trump on some issues, but failed to convince him to start fights the world over. All he really received for his efforts was open ridicule.

“I disagreed strongly with many of his suggestions, as did others in the Administration,” Trump tweeted on Tuesday when announcing the top aide’s ouster. That echoed the president’s comments from four months ago when he told reporters “I’m the one that tempers him. That’s okay. I have different sides. I have John Bolton and other people that are a little more dovish than him.”

It goes to show that Trump is in control of the most important aspect of his foreign policy: whether or not to go to war.

He has certainly threatened conflict before, going so far as to risk nuclear war with North Korea to persuade Kim Jong Un to come the negotiating table (remember “fire and fury?”). And he’s more willing to use military force than Obama, twice bombing Syria and escalating airstrikes on ISIS and other terrorists worldwide. He’s even continued and augmented US support for Saudi Arabia’s war in Yemen.

Still, Trump has walked back every chance he’s had to escalate to the highest level tensions with adversaries. That was always going to put Trump’s “America First” in conflict with Bolton’s “America Everywhere.”

“Where Trump and Bolton seemed to clash the most was on the extent to which aggressive US military intervention should accompany a hawkish foreign policy posture, and then also on the role of diplomacy,” says John Glaser, a US foreign policy expert at the Cato Institute in Washington, DC.

Which brings up the question: Why did Trump pick Bolton in the first place? The answer seems to be that Bolton defended Trump’s foreign policy on Fox News and was a known commodity within Republican circles. The president seemingly wanted an attack dog for himself, but ended up hiring a person who wanted to attack others for real.

Trump’s foreign policy is in shambles, with or without Bolton

The natural instinct is to assume that Trump’s foreign policy will improve with Bolton out the door. The problem is that Bolton didn’t really change Trump — the president still pursued profoundly Trumpian policies.

He’s tried to cozy up to Russia despite its attacks on American democracy. He’s lambasted traditional, long-standing allies from Europe to Asia for not contributing enough to their own defense — losing their trust and respect in the process. He’s mostly forgotten about the hundreds of millions of people that could use American support in Africa. And his trade war with China has hurt the global economy and many of his own supporters in rural areas.

But what he consistently stopped short of was engaging in full-scale war with any adversary. That may be because Trump and Bolton had different views on using force. Bolton wanted bombs to drop in service of regime change and the display of American unilateral power. Trump used threats of violence as a way to look tough and make it appear he was actively decisively.

Trump and Bolton were therefore simpatico on a lot, but it was on war that they differed.

Bolton tried to change Trump’s mind on that. He failed — and got fired for it.

John Bolton is out. Vox’s Alex Ward explains why he was at odds with his boss from Day 1.

Why some states became coronavirus hot spots — and others haven’t
Maxine Waters isn’t standing down: “If you shoot me, you better shoot straight”
4 immigration questions that have gone unanswered in the Democratic debates
4 winners and 2 very big losers from this year’s lackluster VMAs
How the Supreme Court revived Jim Crow voter suppression tactics
Why the Covid-19 vaccines may feel different from other routine shots