John Bolton says he has new intel on Ukraine, but won’t testify without a court ruling 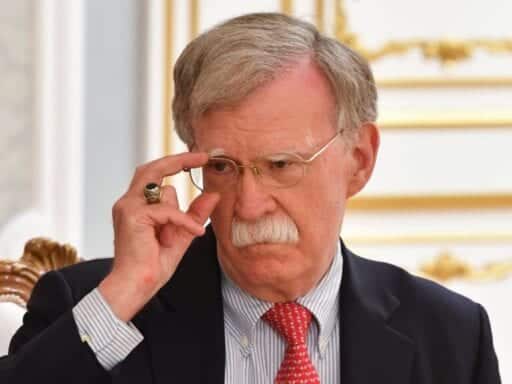 Bolton’s lawyer says his testimony depends on a case involving the powers of the legislative and executive branches.

Former National Security Adviser John Bolton claims to have information of interest to those leading the impeachment inquiry into President Donald Trump, but is refusing to share those insights until a judge rules on a case involving the powers of the legislative and executive branches.

Bolton was involved in “many relevant meetings and conversations that have not yet been discussed,” according to a letter to House attorneys Bolton’s lawyer Charles Cooper sent Friday. But Bolton will not testify until the completion of a lawsuit filed in October asking a judge to rule on whether witnesses should abide by the testimony requests of lawmakers or White House directives not to testify.

That lawsuit was brought by Bolton’s former deputy Charles Kupperman after he was subpoenaed by lawmakers. The White House argued Kupperman could not be compelled to testify, claiming he had “constitutional immunity.”

The future of the lawsuit is uncertain given that the leaders of the inquiry have withdrawn Kupperman’s subpoena, and have asked the judge who was to hear the case to dismiss it. House leaders also chose not to subpoena Bolton after he missed his scheduled testimony Thursday. Responding to the letter from Cooper, Democratic lawmakers argued the suit would slow the pace of the inquiry unnecessarily, and suggested the White House’s claim of immunity could become an article of impeachment.

“We regret Mr. Bolton’s decision not to appear voluntarily, but we have no interest in allowing the administration to play rope-a-dope with us in the courts for months,” a House Intelligence Committee official told Politico. “Rather, the White House instruction that he not appear will add to the evidence of the president’s obstruction of Congress.”

Despite the lack of clarity around the future of the court case, another high-profile witness hopes to join the lawsuit. Mick Mulvaney, the acting White House chief of staff, asked to join Kupperman’s suit on Friday, arguing he was also being pulled in opposite directions and needed legal guidance.

The House Intelligence Committee subpoenaed Mulvaney earlier this week. The White House quickly told him he, too, was protected by constitutional immunity, and that he didn’t have to testify. Mulvaney skipped his deposition on Friday morning.

House lawmakers would very much like to hear from Bolton and Mulvaney because they both have potentially uniquely revelatory stories to tell — both men have firsthand knowledge of Trump’s efforts to pressure Ukraine into investigating a political rival, and both have been mentioned numerous times by witnesses who have testified thus far.

Bolton, for instance, was party to a meeting between top US and Ukrainian officials in early July described in testimony by former National Security Council official Fiona Hill.

According to Hill, Ambassador to the EU Gordon Sondland “blurted out” that Mulvaney had agreed to arrange a meeting between Trump and Ukrainian President Volodymyr Zelensky if the Ukrainians launched investigations into “the energy sector,” which Hill took as a reference to Burisma, the Ukrainian energy company for which former Vice President Joe Biden’s son Hunter had been a board member.

Hill said Bolton ended the meeting abruptly following that statement and that he told her, “you go and tell [National Security Council lawyer John] Eisenberg that I am not part of whatever drug deal Sondland and Mulvaney are cooking up on this.”

Bolton was also on the July 25 call Trump had with Zelensky during which the US president asked his Ukrainian counterpart to investigate the Bidens.

Mulvaney is of interest not just because of the arrangement Hill testified he was a part of, but because of congressional approved military aid that was withheld from Ukraine.

In an addendum to his sworn testimony submitted earlier this week, Sondland said he told Ukrainian officials that if they wanted nearly $400 million in security assistance from the US, they’d have to make a public statement that they were opening the requested investigations. Other witnesses have said Mulvaney authorized that hold, and the acting chief of staff himself suggested he had a role in it being withheld during an October press conference.

This testimony has House Democrats curious about what Mulvaney and Bolton could add to the investigation. And while the request to dismiss the lawsuit would seem to indicate neither man will testify, another lawsuit could be used to compel their attendance.

House Democrats have said Kupperman, Bolton, and any other official who feels torn between the directives of the legislative and executive branches abide by whatever courts decide on a separate case involving former White House counsel Don McGahn.

That suit also investigates the question of whether current and former White House officials have immunity from testifying, and unlike Kupperman’s lawsuit, has been before the courts for some time. While the Kupperman case could take months — or longer — to resolve, a ruling in the McGahn case could come before the end of November.

Democrats have said they do not want a drawn out impeachment inquiry, and that they hope to resolve it by December. Should they win the McGahn case, they believe they would have a legal basis to argue Kupperman and others must appear.

Cooper, the lawyer for both Kupperman and Bolton, however, disagrees. He has argued that his clients differ from McGahn because they have intimate knowledge of national security and foreign affairs, and encouraged lawmakers to subpoena both men if they want to hear from them.

“If the House chooses not to pursue through subpoena the testimony of Dr. Kupperman and Ambassador Bolton,” Cooper wrote, “Let the record be clear: that is the House’s decision.”

This debate may not ultimately be overly significant. House lawmakers already have a fairly detailed picture of what occurred thanks to other witnesses. It is true hearing from Mulvaney, Bolton, and Kupperman could give the inquiry’s leaders added momentum as they move into the public phase of their investigations. And it is true that if Bolton has important information lawmakers currently lack, his testimony could open new avenues of inquiry.

But the Democratic leaders of the inquiry have made it clear they plan to proceed with or without this testimony. With it, they say, they would have more evidence of quid pro quo on the part of the president. Without it, they say they have evidence the president attempted to obstruct a congressional investigation. And both those things could be used as articles of impeachment.

Joaquin Phoenix wore the same tux all awards season
$2 million book deals about the Trump administration are anything but brave
Oprah says she wants to hear “both sides” of the American Dirt debate on appropriation
The conspiracy theories behind the anti-Semitic violence in New York
Biden’s $400 billion Covid-19 plan, explained
A negative Covid-19 test isn’t an all-clear