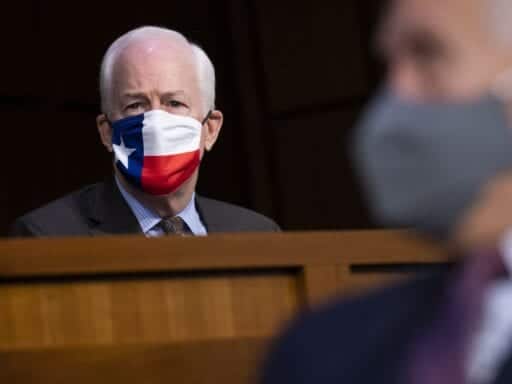 Cornyn is among the lawmakers campaigning for reelection who have signaled distance from the president.

“When I have had differences of opinion, which I have, [I] do that privately,” Cornyn said in an interview with the Fort Worth Star-Telegram editorial board released on Sunday, claiming that he’s previously clashed with Trump on border security and budget deficits. Cornyn’s interview comes shortly after leaked audio captured Sen. Ben Sasse (R-NE) criticizing Trump in a conversation with constituents this week.

“I don’t think the way he’s led through Covid has been reasonable or responsible or right,” Sasse said in audio obtained by the Washington Examiner. “The United States now regularly sells out our allies under his leadership, the way he treats women, spends like a drunken sailor.”

And both follow comments by Sen. Martha McSally (R-AZ) — who avoided saying whether she was “proud” of her support for Trump at an October debate, and longstanding statements from Sen. Susan Collins (R-ME) — who has consistently declined to say who she’s voting for in November.

As a whole, these remarks speak to a broader trend of Republicans doing what many GOP lawmakers have long been unwilling to do: signal a break with Trump.

These efforts to create distance between themselves and the president come as voters’ aversion to Trump appears to be threatening key Republican-held Senate seats. Cornyn, Sasse, McSally, and Collins are all running for reelection. Of the four, only Sasse’s seat is seen as safe, partially because Trump has pushed more moderate Republicans away from the party in several battleground states.

Even states like Cornyn’s that are viewed as Republican strongholds present opportunities for Democrats: Cornyn, for example, is facing a competitive race against Air Force veteran MJ Hegar that Cook Political Report has rated as “Lean Republican.” This has left some members of the GOP apparently more willing to speak out against some of the president’s policy positions as they fight for their own reelection.

As expectations that Trump will be reelected begin to waver, more Republicans seem to be planning for what comes next.

Republicans who are now speaking out against Trump — as well as those like Sens. Ted Cruz (R-TX) and Rand Paul (R-KY) who are leaning into their fiscal conservative bona fides, and bucking Trump’s calls for a more expansive stimulus bill — could well be setting themselves up for a post-Trump party.

Swing-state Republicans could be hurt by their Trump ties

Many swing-state Republicans in places including Arizona, Iowa, and Colorado have faced a tricky balancing act: They’ve had to align themselves closely with Trump to win the support of their conservative base, but these very ties are now hurting them in the general election as independents — and even some moderate Republicans — move away from the president.

As a result, some Republicans may view it as beneficial to their campaigns if they demonstrate some separation from Trump, particularly as the public health and economic fallout from the pandemic continue.

Whether this will be enough remains to be seen. While Cornyn is currently ahead of Hegar in polling averages, other Republican senators are faring poorly — according to averages from RealClearPolitics, Collins, for instance, is is 4.2 percentage points behind her rival, and McSally is trailing her Democratic opponent by 8.3 percentage points.

Sasse, in his remarks, did not seem optimistic about the GOP’s chances, and argued that negative sentiment toward Trump could lead to a “Republican bloodbath” this fall.

Trump is also not doing well in polls — Democratic nominee Joe Biden has led him by double digits in some recent surveys. These numbers have led the president to begin musing publicly about losing the election.

As Bloomberg’s Steven Dennis has written, Republican lawmakers including Sasse and Cruz seem to be among those setting themselves up for a potential Biden presidency in which they would be vocal fiscal hawks.

One way they, and other Senate Republicans, have done so in recent months is by becoming more outspoken in their opposition to additional pandemic stimulus spending, shutting down Trump’s recent demands to “go big” and putting forth their own narrow bill for a floor vote this week. Republicans’ movement in this direction hints at the possibility that they could more strongly embrace fiscal conservatism once again if Biden becomes president.

As endangered Republican Sen. Thom Tillis recently told Politico, “The best check on a Biden presidency is for Republicans to have a majority in the Senate.” But, attempts to distance themselves from Trump or not, that majority currently appears to be in serious jeopardy.

The rapid development of AI has benefits — and poses serious risks
Breathing Seattle’s air right now is like smoking 7 cigarettes. Blame wildfires.
Secretary of State Mike Pompeo blames Iran for attacks on oil tankers
Is it time to do away with job applicant drug testing?
The key lesson from school openings abroad: Contain the virus
The streaming era is ignoring classic movies. Twitter is helping keep them alive.