Jojo Rabbit, a coming-of-age story about a boy and his best friend Hitler, is both hilarious and grim 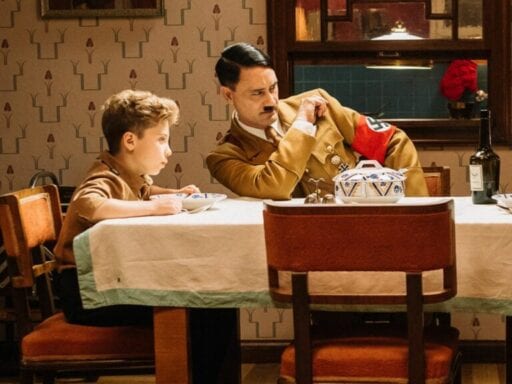 Taika Waititi’s “anti-hate satire” is a comedy set in Nazi Germany. And it mostly works — a comedy with satirical elements, rather than a true satirical tale.

Trailers for Taika Waititi’s Jojo Rabbit strenuously clarify — as cheekily as anyone can — that the film is an “anti-hate satire,” presumably because some marketer at Fox Searchlight savvily intuited that images of a boy in a Hitler Youth outfit romping through the forest with Adolf Hitler wouldn’t go over very well, especially on the internet.

In truth, with some audiences, they still may not. But the “satire” moniker is apt: Jojo Rabbit does cartoonishly skewer the frenzy that enabled Hitler’s rise to power (and propagation of atrocities), filtered through the eyes of a bullied 10-year-old kid.

The film is a little too sprightly to land any heavy punches — it’s more of a comedy with satirical elements than a true satirical tale. Based on Christine Leunens’s 2008 novel Caging Skies (but with some big changes, courtesy of Waititi), it’s really a coming-of-age story, about a kid who’s gotten lost in a world where loyalty has displaced love and where bravado has displaced true bravery.

It’s a bold move to marry a coming-of-age story, which Jojo sets at the end of the Third Reich, to Waititi’s signature goofball aesthetic and frenetic self-awareness. And the film is more successful in some moments than others. But by the end, it’s obvious what Jojo Rabbit is really about: How hate preys on the weak and the young, and how history keeps repeating itself.

Jojo Rabbit tells the story of the end of World War II, from a 10-year-old boy’s perspective

Waititi’s skill in directing children — on display in movies like 2010’s Boy and 2016’s Hunt for the Wilderpeople, which both relied on a child’s performance — is no secret. Jojo Rabbit’s story also revolves around a child, played in this case by newcomer Roman Griffin Davis, who seems like a seasoned pro in his performance as Johannes “Jojo” Betzler. The role requires both expert comic timing and the skill to convey real pathos, plus the ability to seem less like a self-assured child star and more like a bumbling preteen on the brink of adolescence. And Davis makes Jojo Rabbit work.

Jojo lives with his mother Rosie (Scarlett Johansson) in a rambling house near their German town’s center. Jojo’s absent father, he believes, is in Italy fighting for the Fatherland. (The rumors about his father are less kind.) Jojo is a touch scrawny and a little timid, and with the world around him in thrall to Adolf Hitler, he has latched onto the Führer as not just a figure to idolize but as an imaginary, pep-talking friend (played by Waititi). Jojo’s only other friends are his mother and fellow Hitler Youth Yorki (the also fantastic Archie Yates), so Hitler plays a big role in his life.

Jojo and Yorki head off to Hitler Youth camp, run by the vaguely dissolute Captain Klenzendorf (Sam Rockwell) and his lackeys, Finkel (Alfie Allen) and Fräulein Rahm (Rebel Wilson). Klenzendorf announces to the assembled children — a horde of mostly boys, with several rows of girls relegated to the back — that the boys will be learning how to fight with guns and knives and hand grenades, while the girls will be learning to tend to the wounded and “how to get pregnant” (to which Fräulein Rahm enthusiastically rejoins that she has borne 18 children for her country).

Also, they’ll be learning a lot about Jews, like how to spot them and why they’re evil and scary and subhuman, while the Aryan race (like towheaded Jojo) is superior in all ways. Jojo still has a conscience, however, and after he fails to wring the neck of a rabbit in front of a crowd of taunting youths, he earns the shameful nickname of Jojo Rabbit’s title.

But a rabbit, imaginary Hitler reminds Jojo, is both brave and can outsmart whoever chases him. And the upshot of that pep talk is that, in an attempted show of bravery, Jojo winds up exploding a grenade on himself and is sent home from camp.

At home he mourns that he’ll never be part of (real) Hitler’s guard now, what with the scars on his face and his slightly hampered physical ability. But he thinks he may have found another way to serve the Führer when he discovers a Jewish girl named Elsa (Thomasin McKenzie) living in the walls of his house, hidden there by his mother. Both repulsed by and drawn to Elsa, he starts spending more time with her. And as the war rages on outside, he starts, almost imperceptibly, to grow up.

From Boy to Thor: Ragnarok, Waititi’s zany body of work is also an exploration of the double-edged sword of prejudice and hate, which hurts both the one it’s aimed at and the one who wields it. (Consider What We Do in the Shadows, for instance, in which a group of very reasonable vampires hilariously try to navigate life in an Auckland that’s overweeningly hostile.)

Reasonable territory for Waititi, a New Zealand native who’s the son of a Māori father and a Russian Jewish mother and thus not unfamiliar with prejudice. (That he casts himself, moustached and a little paunchy, as the Aryan-loving Hitler is a pronounced thumb in the Nazi eye; that real Hitler barely appears in the film makes the point especially pronounced.) Jojo Rabbit aims to present the people enthralled by Hitler as highly, almost pitiably ridiculous. They are lemmings, personified ignorance masquerading as wise fanboys who will be weaponized by a cowardly, hateful man who thrives on the widespread adoration of the people. (An early sequence features cut-together archival footage of hordes of frenzied Germans adoringly heiling Hitler as a German version of the Beatles’ “I Want to Hold Your Hand” plays. The implications are not subtle.)

Sometimes the humor risks overshadowing what the movie is really about, probably because Jojo’s exposure to the horrors of the Third Reich is limited both by his age and his ability to grasp what’s happening around him, and the movie sticks to his perspective, which at times can feel a bit tonally weird, atrocities seeming lighter than they are. But hate can be both worthy of ridicule and deadly serious, and for the most part Jojo Rabbit manages to thread that needle. People are dying, resources are scarce, and while Jews are exterminated far from Jojo’s home, Germans are hung right in the streets for the crime of working for the Resistance or hiding their Jewish neighbors away from Nazis.

Jojo Rabbit relies on its audience already knowing what kind of atrocities are going on just outside of view. Elsa is older than Jojo by a few years, and she knows why she’s hiding in the wall: Because if she doesn’t, she’ll be exterminated by the Nazis. When Rosie tells Elsa, with compassion, that Elsa’s lived many lives already, Elsa bitterly says that she hasn’t lived at all. Yet Elsa plays into Jojo’s youthful ignorance about Jews for her own amusement, telling him wild and fabricated tales for the enjoyment of watching his credulity in action. It’s a spot of humor in her bleak life, and in the unbearable bleakness of a war that’s trying to exterminate you.

And in the end, it’s vital to remember that this is a story told through Jojo’s eyes, and for adults to ponder. It’s told from the perspective of a boy who doesn’t quite understand what war really is, who Hitler is, what it means to hate a group of people for looking and acting a little different from you. And we sort of get it, in Jojo’s case; he’s too young to know any better. Children, looking for heroes to emulate, follow the adults around them. They idolize those who make them feel good about themselves.

That adults are so easily taken in by the hateful who prey on their fears is a much graver matter. And in the world into which Jojo Rabbit is released, with rising tides of hate and ignorance, where demagogues have groupies and neo-Nazis are easy to find on the internet, preying on the weak, what Jojo Rabbit has to say is both hysterically funny and grim as hell.

We don’t have a president, or a plan
Bloomberg’s Matt Levine explains Wall Street, WeWork, and how to leave Goldman Sachs for a much lowe...
How a viral photo of USPS collection boxes became a lesson in misinformation
How to watch FBI agent Peter Strzok’s testimony in front of Congress
Facebook still won’t take down politicians’ misleading posts, but it’s trying to register 4 million ...
Inside FIRE, the implausible millennial movement to save, invest, and quit the American workplace