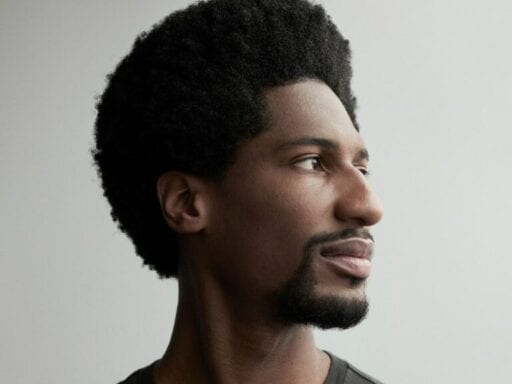 “You have to learn the material within 15, 20 minutes,” says the late-night bandleader of his daunting job.

Jon Batiste makes some of TV’s best music, night in and night out. As bandleader of The Late Show With Stephen Colbert, the multi-instrumentalist comes up with perfect tunes to introduce guests, to complement Colbert’s jokes, and to keep the audience hyped up. (Many of the songs fitting that last category are Batiste originals, performed by him and his band, Stay Human.)

But Batiste’s career stretches far beyond late-night TV. He started out making music at a very young age in his hometown of Kenner, Louisiana, and since then, he’s recorded a whole album in and around the New York subway system, performed all over the world, and appeared semi-regularly on HBO’s series Treme.

His newest album, Hollywood Africans (out Thursday, September 28), is a combination of Batiste originals and terrific covers of iconic songs that he’s put his own spin on, including “What a Wonderful World,” Charlie Chaplin’s “Smile,” and the music from the first level of Sonic the Hedgehog.

I was thrilled to have Batiste join me this week on the latest episode of my podcast, I Think You’re Interesting, and about halfway through our conversation, I realized something: For as much as I’ve covered late-night TV over the years, I have no idea what goes into a late-night musical director’s job. So I asked Batiste, and it sounds like a lot of work.

That section of our conversation, lightly edited for length and clarity, follows.

Take me through a day working on the show, as the bandleader and the music director. What does your day look like, and what do you have to get done before the recording?

It’s long. [Laughs.] It’s a long day. It’s not long except for once it really kicks off. It feels longer than it is. And that’s a good thing, because it means I’m engaged. I always want to be engaged, and the thing about the show is every single day, it’s new. We’re in the same building, but every single day, there’s something that happens in the world. So we have to make sense of it.

In the morning, there’s a pitch meeting with the writers and Stephen. They decide what they want to write about. This is in the early morning after they’ve digested the news. I’ll come in after that, and I’ll start to get a sense, just from what’s buzzing around the building, what people are talking about.

We have to clear songs for use. If you listen to a lot of the selections I make, I try to make a lot of commentary on the jokes and on what’s happening in the world or commentary based on the guests. So I’m crafting that after I get a sense of what the day’s going to be about. What generally happens is it changes.

And all the while, I’m composing three or four pieces every day, brand new for the band to play during the commercial breaks for the audience, and you’ll hear some of that on the air as well. There’s a mix of me referencing things that are going on in the show, and stuff that’s going on in the world, in original compositions.

And then, by 2:30 pm, we’re getting prepped for rehearsal. I have a lot of meetings with my producer, and my creative coordinator. We’ll talk about everything that’s happening on the show, or stuff that’s happening around the show, or maybe there’s a digital bit I have to do. I recently did a bit with Dua Lipa in the elevator. If we have a day like that, I’m doing a bit before we go to rehearsal, and you can imagine what that is like. There’s a lot of intensity to get it in the can in a couple of takes.

So then we go on stage. And by then, something else has probably happened in the world, because the news cycle is basically hourly these days. And everything that I may have prepared and gotten pre-cleared and got licensed to play could change. So after we rehearse the script, they go to rewrite, and they have a really short window to rewrite the show or finish the show.

And during that time, I’m in hair and makeup, wardrobe, and also band rehearsal. We have to squeeze in band rehearsal, which at this point, you have to learn the material within 15, 20 minutes. (Sometimes, we’ll squeeze that in in the morning if we want more time.) But in general, we’ve gotten so quick. It’s incredible, the speed at which we learn music. I’m always saying, “Faster, faster, faster.” But if I think about it in retrospect, I don’t really know a band that can learn music as fast as this band. It’s unbelievable, the range of stuff we play. We played Bach yesterday. Some stuff we play is not just Top 40.

That’s all leading up to taping the show. We’ll do the show, which is Paul Mecurio comes out and warms up the house, then we’ll come out and play a short set, then Stephen will come out, and he’ll feel out the audience, kind of a Q&A. That’s right before we tape.

Then we tape, and that’s about an hour and 15 minutes, and by 7 pm, there’s a meeting with me and Stephen and the executive producers of the show and the writers and the talent department, which we call the post-mortem. That’s the day.

Has there been a time when you had to tear apart all the music you’d done, because something has changed in the news?

Not the whole set, but pretty much every day, there’s a song we may have cleared or learned.

And a lot of times, I’m very spontaneous, too, which is a risk, because I’ll play something that we didn’t have pre-cleared, and I’ll try to clear it before we go to the air, and you don’t want licensing issues with a major network. [Laughs.] That’s a bad idea. I try not to do that.

But in general I’m very spontaneous, and I have a bank of things that I feel would be appropriate at some point. It’s kind of like free association. I have a trunk full of things that I’ve heard that we probably will reference. I improvise using these elements.

You mentioned [in an earlier answer] that you love to feel a connection with your audience. But how does that change when you’re on a television show? Can you feel that connection going out through the airwaves?

It’s different, because on the show, like I said, I’m commenting on what we’re talking about, what the conversation is, and what Stephen is leading the charge on with the monologue. But I’m also playing interstitial music, which, the function of that is different from if you were to see me on stage during a [live] show.

The interesting thing is, I’ve had to learn to shift between these different roles. I may be commenting on something through a phrase, like, “Yeah! Woo!” — a certain kind of thing that’s in the tradition of these kinds of shows. And then I’m creating music that’s part of the fabric of the show, and the energy of the show, and that subliminally influences the mood of the show and where it’s going. And then I’m also performing for the house, which is 400 or 500 people in the Ed Sullivan Theater. During the commercial breaks, we’re playing a set of music. So for them, I’m connecting on the commercial breaks in a way that’s amazing.

But on air, I’m connecting with people in interesting ways. Sometimes people will write me letters or even tweet at me and ask, “What was that song?” or “I see what you did there.” And it’s a different kind of connection, because it’s over TV, but there’s definitely a beautiful thing there that I’ve become accustomed to.

For so much more with Batiste, including how he chose the songs for his album, his memories of growing up steeped in the musical community of New Orleans, and his explanation for why his most memorable meals have been at McDonald’s, listen to the full episode.