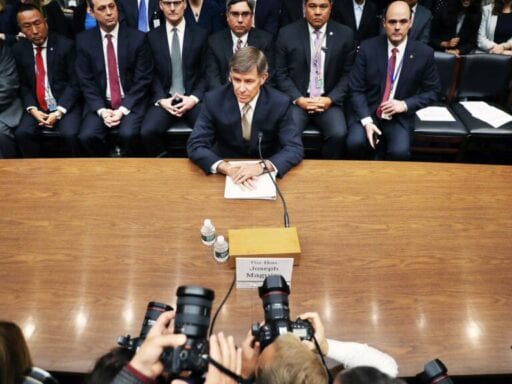 The intelligence official’s testimony did little to quell concerns he tried to hide a whistleblower complaint from Congress.

Acting Director of National Intelligence Joseph Maguire has unexpectedly found himself in the middle of the scandal surrounding President Donald Trump’s apparent attempt to enlist Ukraine’s help in winning the 2020 election.

Maguire has become the subject of controversy following revelations he stepped in to block Congress from receiving the details of an intelligence community whistleblower complaint laying out Trump’s alleged abuse of power in his dealings with Ukraine.

That raised the obvious question: Was Maguire trying to help the president cover up the scandal? Or was he merely a longtime government official who was put in an unenviable position and tried to follow the law as he understood it?

Maguire’s testimony on Thursday before the House Intelligence Committee, which began mere minutes after a declassified version of the whistleblower complaint was made public, was in large part meant to get to the bottom of that important question.

Unfortunately, the question remains open. But that’s not to say that we didn’t learn anything about Maguire and the whistleblower scandal during the hearing. Here were some of the key takeaways.

Maguire may have acted in good faith, but he did Trump’s bidding nonetheless

Maguire made clear early on that he was going to go to painstaking lengths to avoid weighing in on the president’s conduct or getting dragged into political arguments.

During his opening statement, Maguire claimed that “in my nearly four decades of public service, my integrity has never been questioned until now.” But his subsequent obfuscations did little to quell concerns that he was acting as a shield for the president, rather than a neutral public servant.

Under questioning from Schiff, for instance, Maguire wouldn’t directly refute the president’s characterization of the whistleblower as a “political hack,” and would only say that he doesn’t know who the whistleblower is but that he believes the individual was “acting in good faith.”

At one point Maguire said that he views election interference as the biggest threat to America, but during a subsequent exchange with Schiff, he claimed the whistleblower complaint “is not about election interference. It was about a classified, confidential diplomatic conversation.”

That drew a rebuke from Schiff, who noted that at its core, the complaint involved “election interference sought by the president of the United States.” Maguire replied with the equivalent of a verbal shrug.

“As I said, I don’t disagree with the [inspector general’s] assessment that it was a credible matter,” Maguire said, though he wouldn’t personally endorse investigating it.

MAGUIRE: “The [whistleblower] complaint is not about election interference. It was about a classified, confidential diplomatic conversation–“

SCHIFF: “Involving election interference sought by POTUS! It makes it all the more pernicious, wouldn’t you agree?”

As Maguire continued to dodge questions about Trump’s conduct during the last stages of the hearing, Schiff remarked, “I find it remarkable that the director of national intelligence doesn’t think credible allegations of someone seeking foreign assistance in a US election should be investigated.”

Maguire’s position was that questions about whether or not to investigate are the purview of Congress.

Democrats on the committee also repeatedly questioned Maguire’s decision not only to block the report from being sent to Congress, but to initially respond to it by consulting the very people accused of wrongdoing.

Maguire’s rebuttal was that it had “seemed prudent” to talk to the White House first, since discussions between the president and foreign leaders are typically subject to executive privilege.

Maguire also noted in his defense that he’d also looped in the FBI. But, as Rep. Peter Welch (D-VT) noted, that course of action raised the same problem as going to the White House. The FBI is overseen by the DOJ, and the very first page of the whistleblower’s complaint says Attorney General William Barr “appears to be involved as well” in the president’s alleged abuses of power. (According to the White House’s transcript of the call between Trump and Ukrainian President Volodymyr Zelensky that’s at the heart of the whistleblower complaint, Trump asked Zelensky to work with Barr on investigations meant to damage the president’s political rivals.)

Rep @PeterWelch highlights a key problem with how Maguire handled the whistleblower complaint: he sent it to the FBI, but the FBI is ultimately a part of the DOJ, which is overseen by Bill Barr — who is implicated in the complaint! So a fox was ultimately guarding the henhouse pic.twitter.com/ay8kOhll2N

Moreover, executive privilege does not cover criminal acts, and the whistleblower complaint’s allegation that Trump tried to strongarm the new Ukrainian government into discrediting Trump’s political rival seems to be a textbook example of soliciting a foreign campaign contribution — which is illegal.

Maguire’s ultimate fallback position, however, was that he’s not a lawyer and did the best he could with the difficult cards he was dealt.

“I believe that the situation we have, and why we’re here this morning, is because this case is unique and unprecedented,” he said at one point.

As House Intelligence Committee Chair Adam Schiff (D-CA) acknowledged after the hearing, Maguire didn’t come across as a bad-faith actor. But he seemed to be a bit overmatched for his role.

That’s understandable, as Maguire has only been on the job for six weeks. At one point he made clear that he wouldn’t have taken the job had he known at the time that the whistleblower complaint was about to become a major scandal.

He also admitted at another point that he doesn’t view himself as the best candidate for the director of national intelligence role.

At numerous points throughout the hearing, Maguire insisted that nobody — the president included — is above the law. But those words are in tension with the way he handled the whistleblower complaint, which might never have come to light if it weren’t for a letter Atkinson wrote to Congress.

One silver lining for transparency and the rule of law, however, came when Maguire told Rep. Terri Sewell (D-CA) that he’s “doing everything to endeavor” to allow the whistleblower to testify before Congress.