Joshua Brown, a key witness in the murder trial against Amber Guyger, was fatally shot 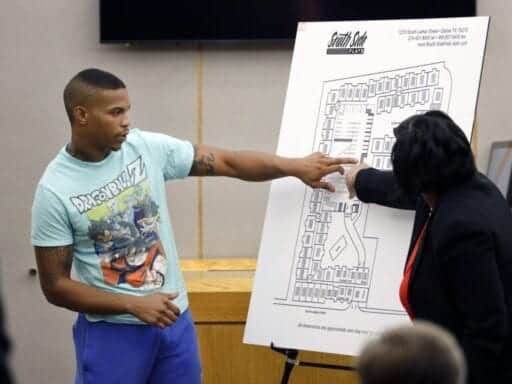 Days after the former Dallas cop was sentenced to 10 years for killing Botham Jean, Brown was shot outside his new apartment complex.

Joshua Brown, a key witness in the murder trial of a former Dallas police officer who was sentenced to 10 years in prison for killing a man inside his own home, was himself shot to death outside his apartment complex this weekend.

Brown, 28, lived across the hall from Botham Jean, a black 26-year-old accountant, and testified in the murder case against Amber Guyger, a white police officer who was off-duty when she entered Jean’s apartment and shot him to death. On Tuesday, Guyger was found guilty of murder and sentenced to 10 years in prison. The verdict was a rare conviction against a police officer in a high-profile shooting that sparked yet another national conversation about the role of race in policing and in self-defense cases. For some, Brown’s death just days later has added an unwelcome coda to the story.

Authorities say that, on Friday, Dallas police were called to Brown’s new apartment complex, about five miles from where Jean was murdered, at about 10:30 pm local time, where they found Brown lying in the parking lot with multiple gunshot wounds. He was taken to the hospital, where he was pronounced dead from his injuries.

Throughout the murder trial against Guyger, Brown testified, sometimes emotionally, about the moments when he heard gunshots ring out as he approached his apartment, and about Guyger’s behavior immediately after she killed Jean on September 6, 2018. Guyger has said she believed the apartment was her own, and that she mistook Jean for an intruder.

Brown said that he saw Guyger enter the hallway from Jean’s apartment, crying, and speaking on the phone. Attorney Lee Merritt, who represented the Jean family in the trial, wrote on Facebook that Brown’s testimony played a key role in challenging Guyger’s account of the incident and her claims that she had shouted commands at Botham before shooting him.

“She didn’t. No one heard that. No neighbors. No passerby’s. Not Joshua as he walked down the corridor. No one,” Merritt wrote.

On social media, Merritt, the attorney, called for answers.

“Brown deserves the same justice he sought to ensure the Jean family,” Merritt wrote. “The Dallas County criminal justice system must [be] mobilized to identify his killer and see that he is held accountable for this murder.

I just spoke with Joshua Browns mother. She is devastated. We all are. Joshua Brown was key witness in the murder of Botham Jean that helped put Amber Guyger away. We need answers. pic.twitter.com/5BCdkVXoQ4

Dallas County prosecutor Jason Hermus, the lead prosecutor in the Guyger case, told the Dallas Morning News on Saturday that Brown’s testimony had been brave and essential.

”He bravely came forward to testify when others wouldn’t,” Hermus said. “If we had more people like him, we would have a better world.”

For some, this mirrors the “reality of the black experience in America”

When Guyger was found guilty of murder, Jean’s family and many activists praised what they saw as a moment of justice served. An arrest of a police officer — much less a conviction — for shooting a person is rare, and as Brittany Packnett noted for Vox, Gugyer’s conviction might not have happened but for the diverse jury pool.

Nevertheless, attorney Merritt called the court’s decision “a signal that the tide is going to change here; police officers are going to be held accountable for their actions and we believe that will change policing culture all over the world.”

With the news of Brown’s death, under circumstances not readily apparent, some of that sense of justice was diminished. Brown’s mother thinks her son was gunned down, Merritt wrote on social media.

”She suspects foul play, and it is difficult to rule it out,” Merritt wrote. “He had no known enemies. He worked for a living. He was not in the streets. We need answers. Immediately.”

On Twitter, the hashtag #Justice4JoshuaBrown began trending. Even among those who do not presume a connection between Brown’s testimony and his death, there is a sentiment that Brown’s death represented a tarnishing of what had been a victory for advocates of due process in cases of police-involved shootings.

“Just when we caught a glimpse of justice for Botham Jean, much of it feels stolen back with the murder of Joshua Brown,” wrote Rep. Alexandria Ocasio-Cortez on Twitter.

Just when we caught a glimpse of justice for Botham Jean, much of it feels stolen back with the murder of Joshua Brown, a key witness in the case.

My heart breaks for his family and for everyone touched by this tragedy. We must get to the bottom of this injustice. https://t.co/2ik9EhvSeh

The social media conversation also mirrors the questions of racial motive that were at play during the trial against Guyger. As Vox’s Sean Collins reported, many saw the case as a heightened, especially tragic example of the adage about the dangers of “driving while black” — or, in this case, as attorney Merritt said, “living while black.”

But those questions were not considered by the jury, whose decision instead hinged on whether Guyger’s claims of self-defense were credible. As Dallas police begin their investigation into the death of another young black man, so intimately tied to this case, that conversation is likely to flair back up. No matter what, Merritt wrote on social media, Brown’s death “underscores the reality of the black experience in America.”

“Brown lived in constant fear that he could be the next victim of gun violence, either state sanctioned or otherwise,” Merritt wrote. “We have more work to do deal with the constant threats to our community both from within and without.”

Why people are calling the new Disney Lion King remake “live action”
Do you burn more calories exercising in the cold? Here’s what the science says.
Ben Ray Luján’s win holds New Mexico’s open Senate seat for Democrats
Hurricane Dorian is gaining strength, and heading toward Florida
How we work out together now
Here’s where all the 2020 Democratic candidates stand on abortion rights