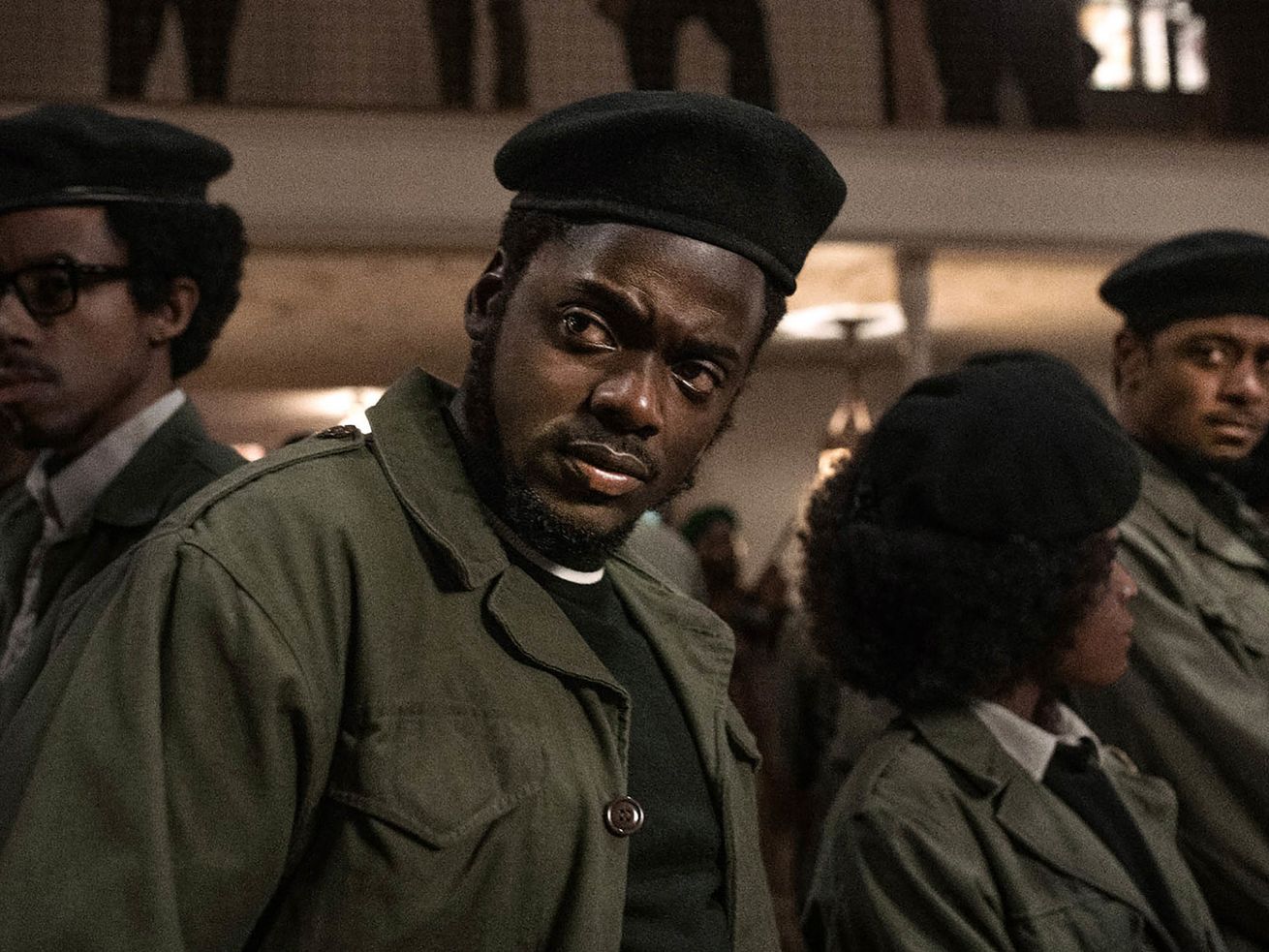 Now on HBO Max, it’s a stellar retelling of a vital historical moment.

Nobody wants to think they’re Judas, but deep down everyone knows they could be. The name of the man who betrayed Jesus for a bag of silver coins, then died in infamy, is synonymous with the most despicable impulses of the human heart: cowardice, disloyalty, deceit, and avaricious malice. A Judas kisses your cheek and then stabs you in the back, and not because he’s standing on some principle or advancing a cause, even a misbegotten one. All he cares for is himself.

Judases populate literature and history, their arc familiar and stomach-churning. But a Judas requires a Jesus, a messiah figure who the powerful see as a threat to the established social order. Betraying a friend is one thing; betraying a savior is an order of magnitude more dastardly, and the results far more tragic.

And so, this ancient archetype is a snug fit for the historical events that Judas and the Black Messiah sets out to recount. Director Shaka King co-wrote the screenplay with Will Berson, from a story by Berson and the Lucas brothers, Keith and Kenneth Lucas. All four come from comedy backgrounds, which at first could seem an odd fit for this historical account. But the combination works beautifully, and the filmmakers’ foundation in comedy — so dependent on rhythm and timing — may go a long way toward explaining why Judas and the Black Messiah feels so alive.

The “Messiah” part of the story comes straight from the FBI’s own 1968 Cointelpro memo, in which director J. Edgar Hoover set as the program’s explicit aim to “Prevent the RISE OF A ‘MESSIAH’ who could unify, and electrify, the militant black nationalist movement.” Hoover notes that Malcolm X could have been that figure, if he hadn’t been assassinated, and that “Martin Luther King, Stokely Carmichael and Elijah Muhammed all aspire to this position,” though Muhammed, he wrote, was too old to really be a threat.

So it’s no surprise that Hoover’s gaze eventually came to rest on 21-year-old Fred Hampton, charismatic chairman of the Illinois Black Panther Party, who was assassinated in a raid on his home by police and FBI on December 4, 1969. That raid was partly enabled by William O’Neal, an FBI informant who had worked his way up the Black Panther ladder to become the Illinois chapter’s head of security and a trusted member of the party.

Yet O’Neal, the Judas to Hampton’s Black Messiah, wasn’t exactly a volunteer for the cause; he was conscripted into becoming an FBI informant after being offered the option as a way to avoid jail time when he was only 17. Years later, at age 40, he spoke about what he’d done in the PBS documentary series Eyes on the Prize, which aired in early 1990. In the interview — which appears briefly, via both reenactments and archival footage of the real thing, in Judas and the Black Messiah — he seems at best ambivalent about his decision to work as an informant, speaking of the FBI agent who oversaw him as someone he looked up to. The night the interview aired, O’Neal died by suicide.

Judas and the Black Messiah centers on O’Neal, played with stunning exigency by LaKeith Stanfield, in a manner that suggests enormous emotional turmoil roiling beneath the young man’s necessarily stoic exterior. Stanfield’s acting is about 70 percent eyeballs in this movie; he swings from subterfuge to terror to uncertainty to something very like worship within a single scene, and it’s remarkable.

O’Neal is picked up by the cops after attempting to steal a car, something he has a history of doing (among other crimes), and he lands in an interrogation room across the table from FBI Agent Roy Mitchell (Jesse Plemons). Mitchell has a proposition for O’Neal: The Bureau needs someone to get close to Fred Hampton. If O’Neal takes the assignment, he avoids jail. How does that sound?

O’Neal has no real political commitments, or if he does, they’re not as important as his personal commitment to staying out of prison — and it’s kind of hard to blame him. He finds his way to Hampton (an electrifying Daniel Kaluuya) and works his way into Hampton’s inner circle. Meanwhile, the Panthers’ work in Chicago is growing more dangerous, and the opposition more heated.

As Hampton, Kaluuya is equally incredible — a charismatic leader, a speech-giver whose presence inspires trust and a fervent need to act. Young and budding Black activists find him magnetic. One in particular, the poet Deborah Johnson (Dominique Fishback), falls for him, which leads to a romance in which Hampton can let his guard down. But in public, he’s a dynamo. Leaders of rival groups are won over to his “Rainbow Coalition,” an alliance of organizations of many races that unite to support one another in protest against everything from poverty and substandard housing to corruption and, especially, police brutality. O’Neal tells Mitchell that Hampton could “sell salt to a slug.”

Judas and the Black Messiah is galvanizing, with an intoxicating energy that makes the story beats land with a jolt. Though there’s overlap between the events of this film and those of last year’s The Trial of the Chicago 7, I found myself thinking more of Steve McQueen’s Mangrove, the first of his five Small Axe films, which chronicles a 1971 trial that involved British Black Panthers. Judas and the Black Messiah evokes the texture and emotional tenor of the time, the feeling of being part of something bigger than yourself — and of knowing that someone powerful is turning their crosshairs toward you.

That O’Neal’s participation in the FBI’s plot to silence Hampton was only secured by threatening him with prison is the bleak irony of the movie’s title. The closer O’Neal gets to Hampton, and the more he becomes involved with the Black Panthers, the more he wavers on whether it might be worth thwarting his mission to support theirs. There’s some kind of difference, however small, between betraying a friend to make some money and betraying a friend to save your own skin.

And so if you find yourself thinking, while watching Judas and the Black Messiah, about who, exactly, is betraying whom, that impulse is not wrong. The movie is also about a country that cruelly betrays whole swaths of its population over and over, and a justice system that doesn’t hesitate to scuttle any notion of real justice when the guys at the top are in jeopardy. The movie opens with Hoover (played by Martin Sheen) roaming around a stage and raging at a group of agents about the threat that Black activists pose to “law and order.” That he leads an organization devoted to “justice,” but reserves the right to decide who deserves that justice, is itself a profound injustice toward the citizens he’s sworn to serve. There’s more than one Judas in this story.

Judas and the Black Messiah is streaming on HBO Max.

Trump team makes a suspicious effort to swing the election with purported Hunter Biden emails
The mysteries of clouds could transform our understanding of climate change
The Lost Year: A new dress, new self-acceptance, and a sudden onset of the soul
Virginia and North Carolina exit polls highlight Joe Biden’s strength with black voters
January 6 was the deadliest day of the Covid-19 pandemic so far
The Zelensky call also shines a light on Trump’s financial corruption