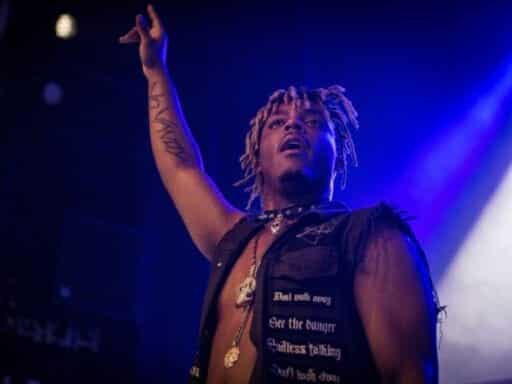 The 21-year-old was, more than anything, just trying to relate.

In the early hours of December 8, just six days after his birthday, 21-year-old Jarad Higgins — better known as the rapper Juice Wrld — died of a seizure (whose cause remains unknown, although early reports suggest a reaction to drugs). Juice Wrld’s death was instantly recognized as a major loss for the music industry: He had released a number one album, become a dominant figure in the increasingly influential Soundcloud rap genre, and found mainstream, crossover success, all before he hit the legal drinking age.

As one of the more prominent Gen Z rappers to break big in the last few years, Juice Wrld helped to define Soundcloud rap’s emerging sound as one characterized by vulnerability, vice, and incongruent musical influences. And now, his death has both added to and underscored the scene’s recent spate of tragic losses. Juice Wrld’s lyrical obsession with morbidity and debauchery wasn’t unique to him, but it now casts an eerie shadow on his passing.

Juice Wrld wasn’t the first Soundcloud rapper to find mainstream success — he was preceded by artists like Lil Peep, Lil Pump, and Lil Xan, each of whom racked up tons of Spotify streams and a devoted online following — but he was the one who perhaps most exemplified the genre’s power. He frequently sang of loneliness and solitude in ways that made his songs both instantly relatable and catchy. He attracted artists from other genres as collaborators because he had mastered a radio-friendly kind of misery, taking the sung-rap style to a much higher place than many of his peers.

Juice Wrld won over fans, and peers, with relatable lyrics and approachable hooks

Soundcloud rap is “low-fidelity and insistent, throbbing with distorted bass, like trap music reduced over a hot fire to its rawest component parts,” Jon Caramanica wrote in a June 2017 piece on the genre’s then-new crossover into the mainstream. It also borrows from the macabre pop punk music that many teenage SoundCloud artists listened to growing up, spawning an adjacent hybrid genre known as “emo rap.” Emo rap often saw artists confronting depression as often as they boasted about drug-fueled lifestyles.

But beyond that, Soundcloud rap came with a unique aesthetic: “high-end streetwear meets high fashion, with face tattoos, hair dyed in wild colors and a prescription-drug ooze,” Carmanica wrote. Most Soundcloud artists were young, usually under 21, and in embracing this aesthetic, they appealed to a crowd of peers who were themselves rebellious.

“Juice wasn’t first [among Soundcloud rappers], but he has leaned the hardest into his hurt feelings, or at least ridden them the furthest up the charts,” Cam Wolf said in a GQ profile of the artist from May. “He makes music meant to be played in the bedrooms of heartbroken teens with crushes, VIP sections filled with bottle-service-indulging clubgoers, or the AirPods of nostalgic millennials. Juice has found success in that sweet spot because he fully embraces all of these emotions at once.”

Juice Wrld started uploading music to Soundcloud under the name Juice Wrld before he graduated high school, but one thing that immediately set him apart from other homegrown artists was the amount of his first big paycheck: In early March 2018, he signed a reportedly $3 million deal with Interscope to release his debut album. At that point, he’d only had one real hit on Soundcloud, despite releasing a full EP and other music for several years before the record deal. His 2017 track “Lucid Dreams” had 2.5 million plays on the platform at the time of his signing, and it would become the song that defined his work, a melodic, downbeat ode to a breakup that feels fatal. The success of “Lucid Dreams,” combined with that of his follow-up single, “All Girls Are the Same” from his first album in 2018, helped propel Juice Wrld to the heights of what is now an in-demand genre.

Juice Wrld’s signature sound of depressed yet earworm-y singalongs is on display. In “Lucid Dreams,” he sings, “You made my heart break / you made my heart ache” atop an interpolation of Sting’s “Shape of My Heart.” But it’s still fundamentally rap, with verses dropped like free-flowing thoughts.

The opening track on this year’s Death Race for Love, his number-one album released earlier this year, is unabashedly depressed: The chorus to “Empty” is “I’m empty / I feel so goddamn empty,” and Juice Wrld references “the same black hole that’s in place of my soul.” But his plaintive lyricism was a crucial part of his draw, and a part of what made him stand out above a pack of Soundcloud rappers telling much angrier stories.

In a 2018 interview with the Chicago Tribune, Juice Wrld explained that his “music is straightforward because I want to give people me and let them know they’re not alone in going through the things that they go through.” He wanted to “create a fellowship” with them, he said.

Juice Wrld had a kinship with his peers, too. Those included the promising rising star Lil Peep and the dogged-by-controversy XXXTentacion, both of whom died young. Peep overdosed in late 2017, at age 21; XXXTentacion was murdered in a robbery attempt six months later, at age 20. Where Peep and XXXTentacion’s trademark sounds were more nihilistic and morose, Juice Wrld’s music was tuneful and more melodic, if also melancholic. But the three were still recognized as contemporaries. And they’ll only be grouped together even more in the future, following Juice Wrld’s death at the same age.

Regardless, his death at such a young age is another tragic bullet point for the genre. Soundcloud rap is a fascinating genre — a blend of rock and pop and trap born from a democratic space outside of the music industry to create an entirely new hip-hop sound. The loss of yet another one of its most notable figures obviously casts a depressing pall. But the biggest loss of all is that we won’t get to see how Juice Wrld’s emotional, experimental, indelible music would have pushed it forward.

Venezuelan President Nicolas Maduro survives alleged drone attack in Caracas
The Trump administration reportedly wants to push countries to decriminalize homosexuality
No writer does “weirdly specific yet relatable” better than Daniel Mallory Ortberg
The Pentagon is giving Trump his Space Force. Congress may take it away.
Ohio Democrats are more ready for socialism than you might think
The 6 best movies you can now watch at home