Julian Assange is fighting the Ecuadorian government over a cat 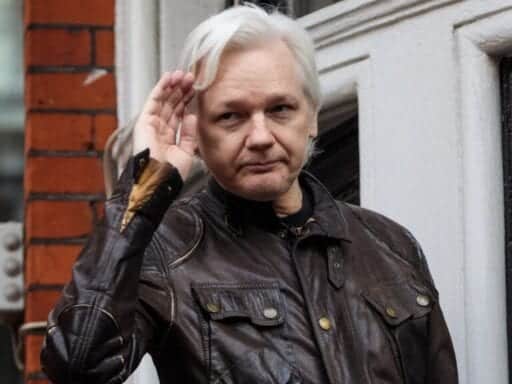 Assange has lived inside Ecuador’s embassy in London for about six years after he fled there to escape extradition to Sweden in 2012. But now he’s overstayed his welcome — mostly because he won’t take care of his cat.

Assange has a pet cat, but he apparently hasn’t been cleaning up after it or feeding it properly, at least as far as the Ecuadorian Embassy staff is concerned. So instead of, you know, doing what a normal person would do and taking care of his pet, he’s chosen to sue the Ecuadorian government for violating his “fundamental rights and freedoms.”

But before we talk more about the cat — and who doesn’t want to talk about the cat? — there’s a larger backstory.

Assange and the embassy have been at loggerheads for a while. He’s allowed to stay on the condition that he doesn’t interfere in the politics of other countries and keeps his area tidy. The problem is that he hasn’t done that — and the embassy is sick of it. In one instance, the embassy took away his Internet in March in a kind of geopolitical timeout for grown-ups. Assange has since regained internet access, but only for his personal computer and phone.

Which, believe it or not, brings us back to the cat. It’s named Michi — though it usually is just referred to as “EmbassyCat” — and Assange is obsessed with it. It’s safe to say Assange wants it to be a top cat of Instagram.

But while Assange might want Michi to have a wholesome, clean-cut appearance online, he’s not cleaning up after it in the real world. That’s led the Ecuadorians to threaten to take Michi away from Assange.

The embassy is so fed up with Assange that it’s even trying to move him to Russia. That amounts to an escalation: Instead of a timeout, it’s the geopolitical version of “get out of my house!”

And so, Assange is suing — seemingly so he can continue to be a bad houseguest. With the holidays coming, it’s clear that Assange is not someone you want to let stay inside your home, or your embassy, or your anything.

But most importantly, the cat deserves better.

Sign up for The Goods by Vox newsletter
Kanye West’s turn toward spirituality, explained
The Supreme Court will hear a new attack on unions. The implications are profound.
Report: Nonwhite jail officers were not allowed to guard George Floyd’s killer
Trump just debuted his 3 main defenses against the Ukraine scandal
Why Asians in masks should not be the “face” of the coronavirus

The best $294 I ever spent: Getting my hair braided