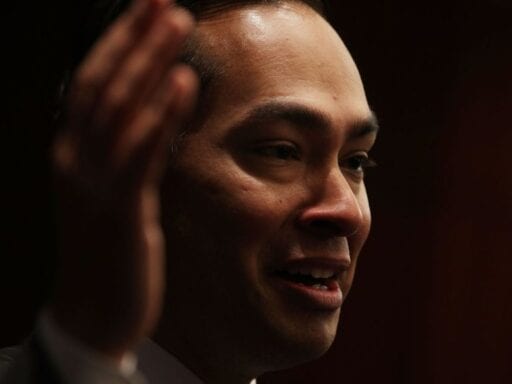 The former San Antonio mayor and HUD secretary is jumping into what is likely to be a crowded Democratic primary field.

Former San Antonio mayor and Housing and Urban Development secretary Julián Castro is officially running for president in 2020, he announced Saturday, jumping into what is likely to be a crowded Democratic primary field vying to challenge President Donald Trump.

Building off the success of a pre-kindergarten program he introduced as mayor, Castro promised to pursue “pre-K for the USA” as one of his first policy proposals, before running through a range of Democratic priorities, including expanding healthcare access, fighting climate change, and criticizing Trump for a failure to “uphold the values of our great nation.”

Castro, 44, hasn’t been much of a contender in early 2020 polls — although those polls include several people who haven’t yet made it clear they’re going to run.

He’s been touted for years as a rising star in the Democratic Party, which got him the keynote slot at the 2012 Democratic National Convention as well as the appointment to run HUD in 2014 (making him the youngest Cabinet secretary in the Obama administration). As Latino voters have become increasingly important to the Democratic Party, and as immigration and border issues have become a central way in which Democrats draw a contrast with Trump, a Latino politician from a south Texas city might have an appealing angle.

But his national profile — and, potentially, his role in the presidential primary — has been overshadowed by fellow Texan Beto O’Rourke, who jumped in to challenge Ted Cruz for Senate in 2018 when Castro did not and who turned his (unsuccessful) campaign into national celebrity.

In order to stand out from the crowd of Democratic presidential candidates, Castro will have to compete with older politicians with much more established policy records, while fending off potential criticism from the left about his HUD run. At the same time, he’ll have to demonstrate there’s a reason to prefer him to Beto and other charismatic stars of the Trump “resistance” beyond simply the importance of having a Latino face to represent a party that needs Latinos to win.

A young insider with some executive experience

Castro and his twin brother, Joaquin — a House member who’s now the head of the Congressional Hispanic Caucus — were both raised in San Antonio by a local legend in Chicano activism, Rosie Castro. But Julián’s politics aren’t as far left as his mother’s — something he had to reassure business owners of when launching his political career in San Antonio — and he and Joaquin have both been career political insiders.

Both Julián and Joaquin went to Stanford (where Julián points out he was a beneficiary of affirmative action) followed by Harvard Law. By the time he was done at Harvard, Julián was already well into the next phase: a campaign for city council in San Antonio. (He held a fundraiser at Harvard while still a student and got $2,000 in seed money.) He was seated on the council in 2001, and (after a failed mayoral run in 2005) inaugurated as mayor in 2009.

Castro’s career, as mayor and as HUD Secretary, has given him neither the opportunity nor (it seems) the inclination to push the Democratic Party to the left on policy.

His signature policy as mayor, which he brought up during his announcement Saturday, was an innovative pre-kindergarten program: Castro got voters to approve a tax hike of one-eighth of a cent (bringing San Antonio taxes to the Texas state maximum) in order to fund four pre-K centers that weren’t tied to existing school districts, each of which enrolled 400 kids. Low-income families got to enroll children for free; middle-class families paid on a sliding scale.

The pre-K centers designed their curriculum based on early-learning best practices, and were able to pay teachers well — and showed impressive results in bringing below-average preschoolers up to above the state average in literacy and math. But while Castro can take credit for the implementation of the program, it’s hardly the bold thinking and easy slogan of “Medicare for all” or Cory Booker’s proposal for baby bonds.

Unlike some of the candidates running for president, Castro does have experience running a government. But a large city government is hardly the federal government. And while other candidates and likely candidates — like Elizabeth Warren and Cory Booker — can use their positions in Congress to come up with and propose new policy ideas, Castro doesn’t have an avenue for the “primary of ideas” beyond the presidential campaign itself. If he wants to compete as a bold policy thinker, he’ll have to work harder to get attention for his plans.

And Castro’s tenure as HUD Secretary (while otherwise unremarkable) has sparked some concern from the left. When Castro was floated as a potential running mate for Hillary Clinton in spring 2016, progressive activists attacked him as too close to Wall Street and the mortgage industry. In particular, they pointed to HUD’s management of delinquent mortgages, accusing Castro’s department of selling too many mortgages to Wall Street banks without enough oversight or regulation. After official criticism from (among others) Warren, HUD changed its policies for the next batch of sales, in what it claimed was a previously planned move.

The reason to pay attention to Julián Castro in a crowded primary field is simple: The Democratic Party needs high turnout and loyalty from Latino voters to win presidential elections (especially as it loses ground in the rust belt and upper Midwest), but it doesn’t have a deep bench of star Latino politicians. And representation matters.

Castro’s rhetorical style is similar to Obama’s — or, for that matter, Marco Rubio’s. He’s skilled at using his own story and the story of his hometown to illustrate the best parts of America. That makes him comfortable talking about immigration and border issues, for example, in strong contrast to Trump.

But Castro’s idea of his identity hasn’t always meshed with what progressive activists might want to hear in 2018. In 2010, the New York Times noted that he didn’t necessarily see all Latinos as “people of color,” and preferred the term “Mexican-American” to a Hispanic or Latino identity. (It’s also worth noting that Castro didn’t learn Spanish until he was elected mayor, and he’s likely still not as fluent as some white politicians — including O’Rourke.)

More to the point, Castro’s political temperament, like Obama’s, has traditionally been sunny and even-keeled. In the Trump era, that risks coming off as conciliatory.

It might be unwise to underestimate the appeal of “a politics of hope” coming from a young charismatic politician. But that’s where the Beto problem comes in.

Castro deliberately chose to stay out of the 2018 Senate race rather than primarying O’Rourke (a primary Castro would have been favored to win). But O’Rourke’s charisma (and national progressive distaste for Ted Cruz) managed to set him up for a potential presidential run from a failed Senate campaign. Castro’s now way behind O’Rourke in name recognition, and it’s not clear whether there is room for two Texas Democrats in the top tier of the 2020 primary.

Of course, the important difference is that O’Rourke is another white man, while Castro is a member of a group that is far better represented within the Democratic base than among its presidential candidates. But Castro’s prospects between now and the summer of 2020 depend substantially on whether he can — or even wants to — make the case to Democrats that this is the year to nominate a Latino for president.

Best Picture winner Nomadland doesn’t just tell a story about America. It embodies it.
The debate over whether to ban “virginity testing,” explained
Trump is rescuing Maine lobstermen from himself, and blaming Obama
“Get out, little punks”: racism in swimming pools has a long history
Consumer advocacy groups are extremely worried about Brett Kavanaugh
Louise Glück just won the Nobel for literature. This poem will introduce you to her work.