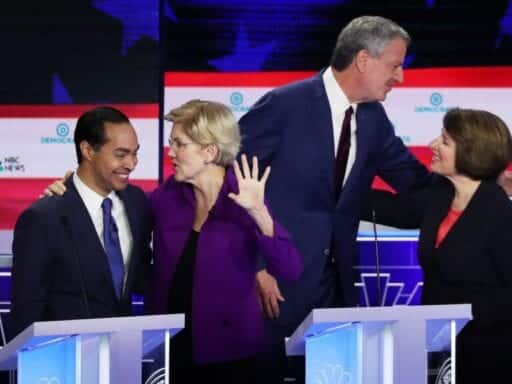 Share
Loading...
Elizabeth Warren and Julián Castro embrace as Bill de Blasio and Amy Klobuchar greet one another at the first Democratic presidential debate in Miami in June 2019. | Photograph by Joe Raedle/Getty Images

“There’s one candidate I see who’s unafraid to fight like hell to make sure America’s promise will be there for everyone,” Castro said of Warren in an endorsement video.

Castro, who suspended his campaign on January 2, announced his decision to back the Massachusetts Democrat in a video released Monday morning. “There’s one candidate I see who’s unafraid to fight like hell to make sure America’s promise will be there for everyone,” Castro says. “Who will make sure that no matter where you live in America or where your family came from in the world, you have a path to opportunity too. That’s why I’m proud to endorse Elizabeth Warren for President.”

The video features the pair speaking with one another in Warren’s kitchen at her Massachusetts home as her dog, Bailey, looks on.

“You know, I started my campaign off, and we lived true to the idea that we want an America where everyone counts,” Castro says. “It’s the same vision that I see in you, in your campaign, in the America that you would help bring about.”

Elizabeth and I share a vision of America where everyone counts. An America where people⁠—not the wealthy or well-connected⁠—are put first. I’m proud to join her in the fight for big, structural change. pic.twitter.com/xDvMEKqpF3

Castro’s endorsement is an important — if a little unsurprising — get for Warren. Of the 2020 Democrats who have dropped out of the race so far, he is one of only three to have endorsed another candidate, and he is the highest profile: former Sen. Mike Gravel endorsed Sen. Bernie Sanders, and Rep. Tim Ryan endorsed former Vice President Joe Biden. As Astead Herndon at the New York Times notes, Castro’s endorsement of Warren isn’t necessarily a shock — the pair clearly share an affinity for one another. There has also been some speculation that Castro may be a potential vice presidential pick for Warren should she win the nomination.

Thank you @JulianCastro for being a powerful voice, for proposing bold and progressive plans, and for using your campaign to help people who need it now. You made this race stronger—and you will continue to be a leader in our party and our country for many years to come. pic.twitter.com/SWlsDC9HcS

Warren might hope that Castro’s endorsement will inject some fresh energy into her campaign. After steadily rising in the polls over the summer, her numbers have stalled somewhat in recent months. Her fourth-quarter fundraising numbers, while strong, lagged behind Sanders, South Bend, Indiana, Mayor Pete Buttigieg, and Biden. New polling over the weekend shows Warren in fourth place in Iowa, behind Sanders, Biden, and Buttigieg, and third in New Hampshire, behind Sanders and Biden. According to a RealClearPolitics average of polls, Warren is polling at 14.4 percent nationally, behind Biden at 29.3 percent and Sanders at 19.9 percent.

Castro will travel to New York to campaign with Warren at a rally at the Kings Theater in Brooklyn on Tuesday.

Iowa shouldn’t vote first. Here’s an idea to fix the primary process.
The state of employment in pandemic America, in 6 charts
The latest developments in the abuse allegations against Rep. Keith Ellison, explained
Today’s rich heirs want to beat Trump. They may have to beat their families first.
Democrats keep talking tough on Silicon Valley. This week, they can’t stop taking money from it.
Billions of wire hangers are used in the US every year. Almost no one buys them.