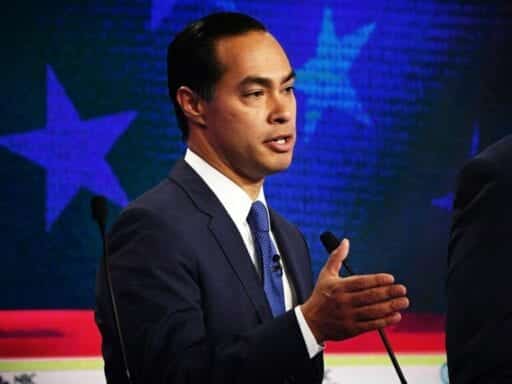 Have we all been paying attention to the wrong Texan?

The first night of the Democratic debates was big for one Texan in the race, just not the one you probably thought it would be six months ago. Instead, it was Julian Castro.

The former Housing and Urban Development secretary and mayor of San Antonio, who announced his presidential bid in January, delivered a breakout debate performance in Miami on Wednesday. He seized the opportunity to talk about his immigration plan and highlight how he’s shifted the conversation about people who enter the United States without papers, gave a nod to reproductive justice and the trans community, and delivered a moving response about police brutality when he listed victims’ names onstage. He also has perhaps the most viral line of the night: “Adios to Donald Trump.”

Debate viewers, it appears, took notice: Google searches for Castro spiked by 2,400 percent (though most of those people were simply searching for who he is). According to Twitter, he was the third-most tweeted about candidate in the entire 2020 Democratic field during the debate, behind just Sens. Elizabeth Warren and Cory Booker.

The Castro team knew it was a good night as well. “I thought it was a home run,” Castro’s campaign manager, Maya Rupert told the Tampa Bay Times.

Castro, 44, up to now had not been the Texan most people were paying attention to — more eyes have been on former Rep. Beto O’Rourke, who narrowly lost a bid to unseat Sen. Ted Cruz (R-TX) last year. Both are polling relatively low, though O’Rourke is significantly ahead of Castro — according to a RealClearPolitics average, O’Rourke is polling at 3.3 percent nationally and Castro at 0.8 percent.

But Castro on Wednesday demonstrated he’s a figure to pay attention to in the 2020 race, and he catapulted himself into the conversation.

Castro showed why he’s one to watch, especially on immigration

Castro, who is of Mexican descent, rolled out his immigration plan in April. And on Wednesday, he took the opportunity to highlight that plan and, particularly, what he sees as one of its most important planks: his proposal to repeal a section of US law that makes it a federal crime for immigrants to cross the border illegally, Section 1325 of Title 8 of the US Code.

Castro said it’s time to “go back to the way we used to treat this when somebody comes across the border, not to criminalize desperation, to treat that as a civil violation,” adding that the authorities often use Section 1325 to justify separating families at the border.

And he went farther than touting his own proposal — he challenged other Democrats to join him. As Vox’s Dara Lind put it, he turned the segment “into a referendum on a policy that is closely associated with him.”

Warren has already endorsed repealing the illegal entry provision, and as Lind notes, even moderate Rep. Tim Ryan seemed to be open to the repeal. O’Rourke, however, signaled he isn’t.

Beyond immigration, Castro backed the Equal Rights Amendment and put abortion rights in the context of reproductive justice. “I don’t believe only in reproductive freedom, I believe in reproductive justice. And, you know, what that means is that just because a woman — or let’s also not forget someone in the trans community, a trans female — is poor, doesn’t mean they shouldn’t have the right to exercise that right to choose,” he said. Vox’s Anna North explained why it was so significant:

It was notable to see a candidate bring up the concept of reproductive justice, a term coined in 1994 that describes a focus not just on the legal right to abortion but on affordable access to a full range of reproductive health care, as well as the ability to parent children safely. Though activists have organized around this framework for years, presidential candidates haven’t necessarily cited or engaged with that work, as Castro at least attempted to do.

Castro got a solid amount of speaking time on the crowded debate stage, clocking in just behind Sen. Amy Klobuchar.

Who dominated the #DemDebate?

“Last night Julian made clear that he’s the best candidate to take on Donald Trump in November,” Castro press secretary Sawyer Hackett said in an email. “Democrats are looking for a nominee with the right experience, the right bio, and the right plans to take on this president — and voters got a preview of what that would look like with Secretary Castro as our nominee.”

We got Texan vs. Texan in Castro and O’Rourke

Thus far in the 2020 primary, most of the Texas candidate buzz has gone to O’Rourke, who was celebrated as something of a Democratic darling during his 2018 Senate campaign. But Castro is out to change that — and he’s not pulling punches.

One of the fieriest moments of Wednesday’s debate came between Castro and O’Rourke over Section 1325, which O’Rourke has been uneasy about repealing, because, as the Texas Tribune notes, it might make it harder to prosecute drug smugglers and human traffickers. Castro interjected during O’Rourke’s discussion of the deaths of Oscar Alberto Martinez Ramirez and his daughter, Valeria, migrants who died crossing the Rio Grande river and the images of which were captured in a now-viral photo, and pushed him on his Section 1325 stance.

O’Rourke countered, saying that in Congress he helped introduce legislation that would ensure the US doesn’t criminalize asylum seekers and refugees. Castro’s response: not good enough. “You should do your homework on this issue,” he said.

Castro also took a swipe at O’Rourke over the matter after the debate.

.@JulianCastro to reporters in spin room: “I find it very ironic that a senator from Massachusetts and a senator from New Jersey are the ones who understand this border policy and this law better than Congressman O’Rourke.”

Thursday morning, when hosts on NBC’s Morning Joe asked him whether his debate with O’Rourke was “planned, strategic, or just happened,” Castro said he’d “be lying” if he said he hadn’t thought about their disagreement on Section 1325 before.

“This is the exact law that has allowed this administration to incarcerate the parents and then separate them from children and I called for the elimination of it,” Castro said. “I just wanted to point out that if you’re not calling for the repeal of the section that means that basically you’re going to keep the status quo and you’re going to allow family separation.”

To be sure, O’Rourke’s problems during and after the debate were not just about Castro. The former Senate candidate had a rough night all around.

Still, the juxtaposition between Castro and O’Rourke, and the former’s willingness to take on the latter head-on in an issue where both profess to have strengths, shows why debates can matter. Was Wednesday a death blow to O’Rourke? No. But it did leave a lot of people wondering the same thing: Have we been paying attention to the wrong Texan?

How The Good Place taught moral philosophy to its characters — and its creators
A year after his confirmation hearing, Brett Kavanaugh faces a new sexual misconduct allegation
6 major questions the Supreme Court still needs to resolve this term
Household income surged in April despite the collapsing labor market
The “woman’s work” of the pandemic
How Awkwafina rode the unruly woman trope to stardom