Julián Castro has an ambitious plan to fix American policing 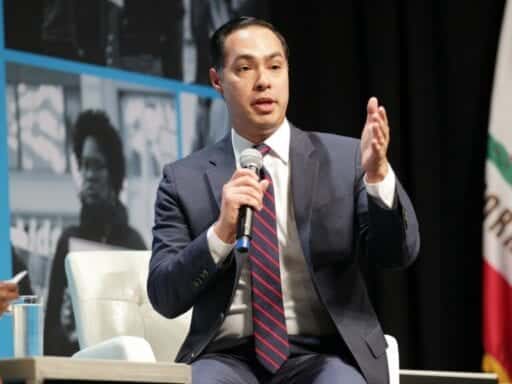 The 2020 Democratic candidate is the first to release a comprehensive policing reform platform.

2020 Democratic presidential candidate Julián Castro has unveiled a comprehensive new policing reform plan aimed at addressing police violence and its effects on communities of color — making him the first and only candidate to present such a detailed proposal to date.

The reforms include restricting when police officers can use deadly force, investigating police departments that fail to meet federal standards, ending the “school-to-prison pipeline,” and encouraging local governments to limit arrests to serious offenses.

The former San Antonio mayor and US Housing and Urban Development secretary first hinted at the policing platform when he launched his campaign in January, telling supporters at the time that the US must “overhaul and reimagine our justice system,” specifically citing the deaths of unarmed black people like Eric Garner, Sandra Bland, and Tamir Rice and describing them as “victims of state violence.”

Castro further previewed his new policing platform during a June 1 appearance at the MoveOn Big Ideas Forum in California, drawing a comparison between the 2015 arrest of Dylann Roof in the aftermath of his deadly attack on black worshippers at Charleston’s Mother Emanuel Church to the police shootings of unarmed black men, women, and children in recent years.

“How many of these videos do we have to watch to understand that even though we have some great police officers, this is not a case of bad apples?” Castro said. “The system is broken, so let’s fix it.”

If Dylann Roof can murder nine churchgoers and be apprehended without incident, then why not Eric Garner? Or Philando Castile? Or Sandra Bland? As I told @MoveOn this weekend, our policing system is broken, but I have a plan to fix it. https://t.co/Ub55mMxlWu pic.twitter.com/khLscPSYSt

In launching his policing platform, Castro joins a handful of Democratic presidential candidates who have offered specifics about how they plan to address the justice system.

But Castro’s is the first full plan that focuses almost entirely on policing and its effects on communities of color. Others, such as those introduced by Sen. Amy Klobuchar and Sen. Cory Booker, focus on aspects of the justice system like clemency reform and mass incarceration.

The praise could help Castro, who is averaging between 1 and 2 percent support in national polls of the presidential primary. Castro’s attention to policing might be particularly helpful for his standing among black voters, who have highlighted police accountability as a key policy concern in several recent polls.

Castro’s policing plan is ambitious, and is centered on three main areas:

For each of these areas, Castro lays out a series of detailed policy reforms and includes a mix of possible executive orders, suggested legislation, and federal funding incentives that could be used to change how police operate in the US.

To tackle overaggressive and biased policing, Castro proposes restricting the ability of officers to use force to situations where there is a deadly threat, requiring officers to identify themselves and give a person time to comply before using force, ending stop-and-frisk, and requiring officers to be trained on implicit bias and other racial equity issues.

For the second issue, police accountability and transparency, Castro calls for a national database of officers who have been decertified or fired for misconduct (something that is notoriously hard to track currently, even as officers fired for misconduct find new positions with other departments or are rehired by their old departments). Other proposals include investing in community oversight boards and ensuring transparent investigations of police officers and departments involved in fatal police shootings.

Finally, Castro suggests that addressing these first two concerns will make it possible to mend the growing rift between police officers and the communities they serve. To further this goal, the candidate says he would use executive orders to end police departments’ ability to access to surplus military supplies.

Castro says he would also encourage the federal government to work with state and local police departments to deemphasize the enforcement of minor offenses, establish community-led training for police officers, and incentivize local governments to pursue alternatives to incarceration for offenses that do not threaten public safety.

It’s a pretty big list of reforms, many of which have been proposed by activists and criticized by police departments in recent years.

Some of Castro’s proposals, like his call for limiting officers’ ability to claim “qualified immunity’” — which allows officers to avoid lawsuits — are seen as an especially big deal for police reform advocates, who note that one of the biggest impediments to police reform is the protections given to officers accused of misconduct.

Castro’s plan “proposes a wide range of solutions that are proven to save lives and change policing outcomes,” Samuel Sinyangwe, a member of Campaign Zero, a police reform-oriented research and advocacy group, told CBS News.

Dante Barry, the cofounder and executive director of Million Hoodie Movement for Justice, one of several activist groups that were consulted by the Castro campaign, told NBC News that the candidate’s platform is “bold” and that it was especially significant that the only Latino candidate in the race recognizes the ways that police violence impacts black and brown communities.

But Barry also noted that parts of Castro’s policing platform, like the calls for body cameras to record officer behavior, are a bit outdated and have already been shown to be less effective than initially hoped.

Black voters want 2020 candidates to offer specific plans about policing. Castro is the first to present such a comprehensive one.

Since 2015, roughly 1,000 people have died in police shootings every year, according to a database maintained by the Washington Post. So far, 390 people have been killed by police in 2019.

These shootings disproportionately affect black Americans. As Vox’s Dara Lind and German Lopez have previously reported, there are significant racial disparities in federal data and other media-compiled databases of shootings, all of which find that African Americans are disproportionately likely to shot by police officers. Native Americans and Latinos are also more likely than white Americans to experience fatal police shootings.

With the 2020 election on the horizon, black voters in particular have said that they are looking for Democratic candidates with real — and specific — proposals to address this.

A survey released on May 21 by BlackPAC, a group focused on black voter engagement, found that black voters see police accountability as a top issue they want 2020 candidates to address.

And a recent survey of more than 30,000 black Americans called the Black Census Project, which focused on underrepresented but politically engaged groups, found that many see police accountability as a serious issue. Eighty-seven percent of those surveyed said police killings of black people are a problem, and 73 percent said that police accountability in particular is crucial for communities to have faith in police.

As the Democratic primary moves forward, more and more candidates will be called to explain exactly how they plan to address specific concerns brought by black voters and other voters of color. With his policing plan, Castro has shown that these are issues — and communities — that he plans to center in his campaign.

Trump’s argument about “Joe Biden’s America” is undercut by the fact that he’s in charge
The best $80 I ever spent: TSA PreCheck
Young people have a stake in our future. Let them vote.
America is failing Black moms during the pandemic
Pramila Jayapal’s ambitious plan to get every worker their paycheck during coronavirus, explained
Hearing loss affects 1 in 4 adults in the US. Is our noisy world to blame?