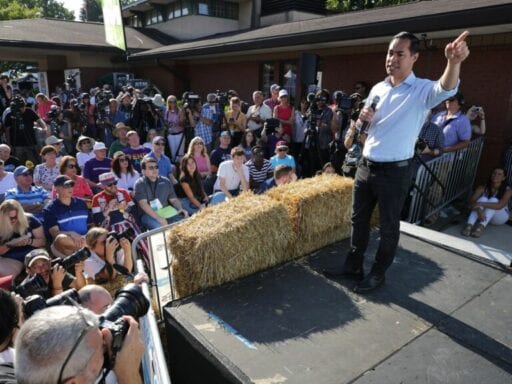 The Democratic presidential candidate is the first to address a solution for climate-induced mass migration.

Democratic presidential candidate Julián Castro’s climate plan, released Tuesday, calls for the US to create a new category of refugees to welcome people displaced by the warming planet.

The US only accepts refugees who have been targeted based on their race, religion, nationality, politics or affiliation with certain social groups. As climate change threatens everything from crop production to coastal cities, tens of millions of migrants are expected to be pushed out of areas that will no longer be habitable in the coming decades.

The World Bank estimates more than 140 million migrants will be displaced as a result of climate change by 2050. Castro’s plan is meant to address that growing crisis. But other experts worry it will come at a cost for people who are fleeing persecution in their home countries.

Migrants displaced by climate change have no formal rights in the US and internationally. While 164 countries signed a United Nations agreement in 2018 to work together to resettle those migrants, the pact is not legally enforceable and depends on voluntary participation.

The US and its international partners, however, are running out of time to determine how they will support such migrants. Glaciers are melting and sea levels are rising, flooding low-level coastal areas where migrants have already started to flee. Increasing global temperatures have led to the desertification of farmland just as growing populations demand higher food production, making the terrain unlivable. Droughts cause local conflict over control of water resources and are the biggest killer among weather-related catastrophes, according to the UN.

Castro’s plan acknowledges that the existing criteria for refugees in the US may cover some migrants who have been persecuted in “climate-driven conflicts,” but ultimately, he says it’s not enough. The US must be proactive and “cannot wait for climate change to destabilize a society before providing assistance,” he writes.

Yet, in spite of mounting concern about climate-related migration, the US has scaled back its refugee program under President Donald Trump, lowering the cap on refugees admitted to the US from 110,000 in fiscal year 2017 to 30,000 in fiscal year 2019. And Trump officials may not stop at that — Ted Hesson of Politico reported in July that they are considering slashing admissions to zero next year.

Most of the Democratic presidential candidates call for the US to prepare for mass migration as a result of the climate crisis, but none have gone so far as Castro in proposing to create a whole new category of refugees.

Sens. Bernie Sanders, Elizabeth Warren, and Amy Klobuchar have all endorsed the Green New Deal, which acknowledges that global warming exceeding two degrees Celsius above pre-industrialized levels will spur mass migration and disproportionately impact migrant communities in the US. Former Vice President Joe Biden has called for the creation of a national commission to measure the national and economic security effects of mass migration due to climate change. Sen. Kamala Harris’s plan highlights how climate change will aggravate international conflict and diminish natural resources, resulting in forced migration.

Creating a new refugee category might ensure that the US is directly admitting at least some people affected by the climate crisis. Lawmakers would likely have to establish criteria under which migrants could prove they were displaced, though, in practice, they might end up excluding individuals who do not have the resources, monetary or otherwise, to make a compelling case.

Castro says that any refugee program for those displaced by climate change must also involve agreements with countries that will suffer most from rising sea levels, including island nations in the Pacific and Caribbean. The US would work with those countries to invest in preparedness and resettlement of displaced families.

Castro has not specified how many migrants he wants the US to take in, but he has proposed raising the overall refugee cap back to its pre-Trump level of 110,000. It’s also not clear how creating a new category of climate refugees might alter how they are processed abroad given that they are not recognized under international human rights law.

Though novel among the plans of other Democratic presidential candidates, Castro’s idea of creating a category of “climate refugees” is not new and has long divided academics and policymakers.

The current definition of a refugee leaves migrants displaced by climate change almost entirely unprotected and unacknowledged, argues María Cristina García, a professor of Latino studies at Cornell University who is writing a book on climate refugees.

But others fear that opening refugee programs to tens of millions of migrants affected by climate change would come at the expense of those traditionally considered refugees.

Dina Ionesco, who oversees migration and climate issues at the UN Migration Agency, wrote in June that doing so would “weaken … refugee status” at a time when many migrants are facing persecution and conflict worldwide.

Instead of calling for a new “climate refugee” status, she suggests focusing on climate “migrants.”

“[T]he current focus of the debate on establishing a climate refugee status can lead to a narrow and biased debate and would provide only partial solutions to address the complexity of human mobility and climate change,” Ionesco writes.