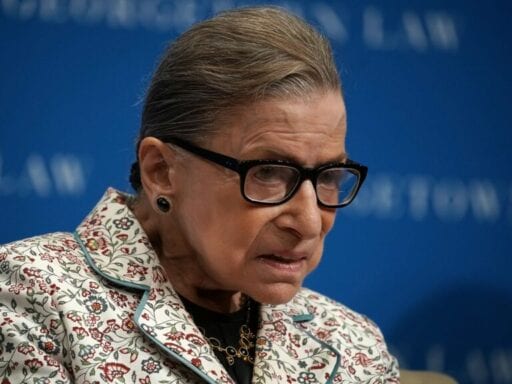 The justice recently completed radiation treatment for a tumor on her pancreas.

Justice Ruth Bader Ginsburg underwent radiation therapy this month for a tumor on her pancreas, the Supreme Court announced on Friday.

Ginsburg, 86, had three weeks of radiation on an outpatient basis beginning August 5 and finishing this week, according to NPR.

“The tumor was treated definitively and there is no evidence of disease elsewhere in the body,” a statement from the Supreme Court said. “Justice Ginsburg will continue to have periodic blood tests and scans. No further treatment is needed at this time.”

Ginsburg has been treated for cancer several times over the past 20 years, NPR notes. This summer marked her second round of treatment in less than a year. In December, she had surgery for lung cancer. Doctors said that surgery was successful and there was no evidence of remaining cancer at that time.

Health issues for the justice, a liberal who has become a feminist icon in recent years thanks to her fiery dissents and her work on women’s rights, have led to questions about how long she will remain on the bench. If she were to leave during President Trump’s term in office, he would almost certainly appoint a conservative justice, giving conservatives a 6-3 majority on the Supreme Court.

That could give right-wing justices enough of a margin to overturn Roe v. Wade and accomplish a variety of other conservative priorities.

But speculation about Ginsburg’s longevity on the Court has always run up against her legendary toughness.

“There was a senator, I think it was after my pancreatic cancer, who announced with great glee that I was going to be dead within six months,” Ginsburg told NPR before her most recent round of treatment. “That senator, whose name I have forgotten, is now himself dead, and I am very much alive.”

The worst idea of 2020
A Senate primary to watch on March 10
Natural disasters are increasing. The world’s poorest are left to fend for themselves.
Trump donated $100,000 of his salary to fight coronavirus. He’s made much more than that off the pre...
Jeff Bezos finally added two more women to Amazon’s senior leadership team — joining 19 men
Trump’s Israel-Palestine “peace plan” is a con