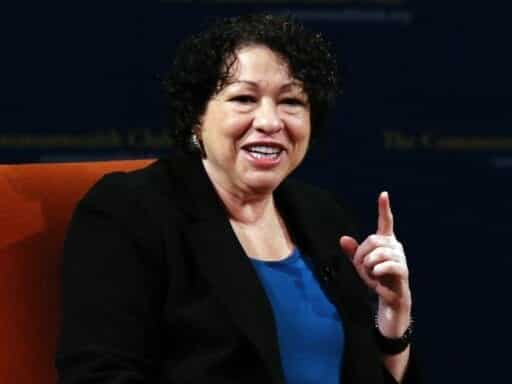 She’s not compromising, and she’s not pulling her punches.

The retirement of Justice Anthony Kennedy — along with the series of conservative decisions that he joined at the end of the Supreme Court term preceding his retirement —make this a deeply depressing time for liberal jurisprudence. The travel-ban decision may have been bad, in short, but worse may be yet to come.

But this term also provided a ray of light amidst the darkness: Justice Sonia Sotomayor emerged as a uniquely effective member of the Court.

In her votes and in her voice on and off the bench, Justice Sotomayor has unflinchingly called out the Court’s rightward turn, and is confronting it. She’s not strategically tacking in a misguided effort to compromise with increasingly uncompromising conservative colleagues. In doing so, she’s providing a roadmap for how liberal justices should perform when they’re in the minority, which is where they’re likely to be for some time.

The dilemma: confront or compromise?

The four liberal justices have for years faced a complicated tactical decision on a Court in which they’re consistently outnumbered. Do they cooperate with the conservative justices, even when they might prefer not to, in the hopes that conservatives will in turn cooperate with the liberals more often? Or do they confront the conservatives by voting and speaking their minds, assuming their colleagues on the bench cannot be persuaded — but that others in the legal or political community can be?

Relative to her liberal colleagues, Sotomayor is more confrontational and less cooperative. She has been the most consistent among the liberal justices in dissenting from significant decisions crafted by conservative majorities, particularly this term (with Justice Ruth Bader Ginsburg, the more familiar liberal icon, a close second).

That trend continued this term. In Masterpiece Cakeshop v. Colorado Civil Rights Commission, Breyer and Kagan again joined the five conservatives in focusing on the threats to religious freedom the case presented, more than on the threats to same-sex couples. Breyer and Kagan agreed to focus on allegedly biased statements by members of a Colorado commission that arbitrated the case, and not on the fundamental issue of whether the baker could deny service to a gay couple.

Again, only Sotomayor joined Ginsburg’s dissent, with both concluding Colorado was right to focus on the fundamental challenge to civil rights posed by the baker declining to make wedding cakes for same-sex couples.

Her dissent in the travel ban case made news

In the travel ban case, Trump v. Hawaii, Breyer and Kagan joined together in a dissent that took a fairly conciliatory approach to the conservative majority, which had argued that the decision was a permissible exercise of executive power. Breyer and Kagan would have remanded the case to the lower courts to consider how individual waivers to the travel ban were faring. They considered it plausible that if enough Muslims were receiving waivers to the travel ban, that fact could remove the taint of religious bigotry that President Donald Trump’s many statements had created.

In contrast, Justice Sotomayor’s dissent (joined by Ginsburg) argued with striking passion that the travel ban was analogous to the internment of Japanese Americans in World War II; it also spent a good part of seven pages summarizing bluntly what President Trump has said about Muslims. (Breyer’s dissent barely mentioned these comments.) She read portions of her dissent from the bench with what one reporter in the room called “fury,” and her opinion drew news coverage of its own.

Even Ginsburg hasn’t voted against the conservatives in some important situations in which Sotomayor has staked out a liberal position. Sotomayor wrote a dissent just for herself objecting to the Court’s decision not to hear a case challenging a death penalty sentence from Florida, noting the systematic ways in which Florida courts had failed to give these defendants a fair day in court.

We will never know what brilliant opinion Kagan would have written in Masterpiece Cakeshop if she hadn’t been focused on getting conservatives to agree with her. Sotomayor, by contrast, is producing a model for liberal judges throughout the federal court system — and those justices will not be in the wilderness forever.

As the Court turns rightward, conservatives have less and less reason to compromise

The liberal legal imagination tends to fetishize a few famous episodes of judicial cooperation, like Brown v. Board of Education, in which nine justices of varying ideologies compromised to produce a single, unanimous opinion. On a polarized Court in a polarized country, though, hoping that justices would work that hard to stay together is more dream than reality.

The reasons for voting with the five conservatives on the Court look all the more flimsy now that Kennedy is retiring. Chief Justice John Roberts and Justices Samuel Alito, Neil Gorsuch, and Clarence Thomas are sufficiently ideologically driven that they’re not going to make many concessions in many cases.

Indeed, this term even Kennedy appeared uninterested in making concessions to the liberal justices. In every 5–4 decision this term in which Kennedy was in the majority, he joined the four conservatives rather than the four liberals. With Kennedy’s successor likely to move the Court even further right, there will be even less of a need for the Court’s existing conservative quartet to take the liberal position into account. They will have their five votes; they won’t make concessions to get that tally up to six or seven.

Sotomayor’s unique voice has given the liberal justices a roadmap for how to confront the conservative turn. She is the voice of liberal anger at a Court, and a country, that has abandoned liberal values. She is outraged by the outrageous, and she is speaking that outrage not just to lawyers and judges but also to the public and to future historians.

At a time when President Trump is attacking courts for being out of touch with the people, Sotomayor is serving as the People’s Justice, giving voice to the sentiments of both a substantial fraction of the legal elite, and the laypeople who fail to understand why a same-sex couple shouldn’t be able to buy a wedding cake.

Speaking to those not sitting on the Court has become essential. Justices increasingly come to the Court with fixed legal sentiments incapable of being altered by their colleagues. But dissenting judges can help inspire people outside the Court to bring lawsuits, and to make specific arguments when they do so.

Changing how people think about law determines what sorts of legal arguments people consider to be correct (or ridiculous), and therefore what types of judges and justices that the public will support — and which judges politicians will nominate. (And even when legal arguments from colleagues cannot persuade justices, sometimes public pressure can, though the justices would never admit it.)

Breyer has always had the voice of a technocrat. Kagan’s voice has been that of the clever colleague, devising brilliant hypotheticals and clever turns of phrase. These styles are indispensable parts of our legal conversation, but they do not generate the attention necessary to persuade the public that liberal justices are in the right. (One poll last year found that of 1,032 Americans asked to name members of the Supreme Court, not a single one recalled Breyer.)

Ginsburg inspires people, as the popularity of the recent documentary RBG shows, but Sotomayor may prove even more successful in this regard. Because she goes to a broader range of places for her public appearances and speaks in a broader range of styles at these appearances, she is reaching and persuading different audiences with her different voice. A typical Sotomayor public appearance combines personal narrative and legal argument. And she mingles at those events, often talking to the least powerful audience members first, and the most powerful last.

Her impassioned language in the travel ban case caught legal reporters’ attention, but it was just the latest example of a voice that we heard earlier in the term. In a dissent in a case about police violence, she noted a “troubling asymmetry” between how the Court treats police officers and their occasional victims. She said that the Court “tells officers that they can shoot first and think later.”

Kennedy’s retirement may lead to the unraveling of much of President Barack Obama’s legacy. But one of Obama’s first actions may end up becoming one of his most consequential: nominating Sonia Sotomayor to the Supreme Court. She represents the diverse coalition that sent Obama to the White House and now feels wrongly displaced from it. Sotomayor is now their justice — the leader of the Supreme Court in exile.

David Fontana is a professor of law at the George Washington University School of Law. Find him on Twitter @proffontana.

The Big Idea is Vox’s home for smart discussion of the most important issues and ideas in politics, science, and culture — typically by outside contributors. If you have an idea for a piece, pitch us at thebigidea@vox.com.

Why is Marco Rubio tweeting about Salt Bae?
Watch: the biggest movie and TV trailers released at New York Comic Con
The trial begins for the ex-officer who shot her unarmed neighbor Botham Jean
What we learned from the BuzzFeed News report that Trump told Cohen to lie to Congress
Consumers were slammed in the Great Recession. The CFPB’s former director warns worse could be on th...
The new Apple-Google contact tracing tool finally seems useful