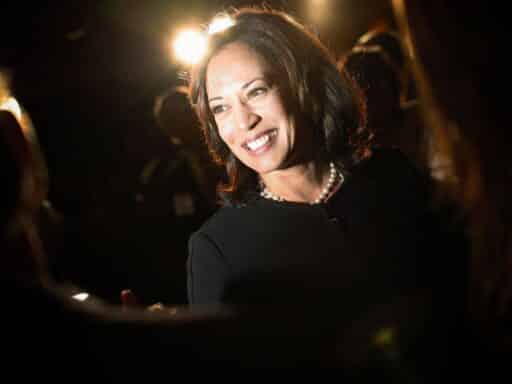 Politicians who happen to be multiracial face expectations that simply aren’t realistic.

The ascension of Sen. Kamala to the vice presidency is a singular historical event. The hope it suggests to America and the signal it sends to all women is a big deal: For the first time, a woman, an American daughter of Black and South Asian immigrants to boot, has risen to the second-highest political office in the land. Our current national tumult, particularly the egregious attempt to undermine the results of our presidential election, gives us even more of a reason to lift up Harris’s election as a source of inspiration.

This moment additionally opens up the opportunity to think about the American mixed-race experience, which is part of Harris’s remarkable story. It is also a part of our national story that cuts against the grain of nostalgic white nationalist fantasies of American greatness. As long as there has been a United States of America, there have been mixed-race Americans. Cultural and political meanings have been layered onto that fact, opening up multiracial people, especially if they live public lives, to scrutiny of their ethnic and racial authenticity.

The growing number of Americans who claim mixed-race identity has even led some to indulge in a dream that is the polar opposite of the MAGA fantasy — but a fever dream nonetheless — that a multicultural and mixed-race majority will bring about a post-racial world. Demography is not destiny, as the past election has reminded us, and to place such expectations on individuals who happen to be of mixed descent is unrealistic.

Kamala Harris’s father, Donald Harris, was from Jamaica, and her mother, Shyamala Gopalan, was from southern India. As Harris recounted in her autobiography, they met as students while studying at the University of California Berkeley. Her origins in mid-1960s Northern California offer a multicultural narrative that has appealed to a broad audience throughout her political career. This calls our attention to the shifts in attitudes and conditions that have made interracial relationships more public and prevalent and American racial identifications more flexible. For these reasons, some may see Harris, as some did with Obama, as a transformative post-racial figure.

In her autobiography, Harris does not explicitly identify as mixed or multiracial, though. She claims and expresses pride in her South Asian ancestry, but she makes clear in her autobiography her and her younger sister Maya’s racial identifications: “My mother understood very well that she was raising two black daughters. She knew that her adopted homeland would see Maya and me as black girls, and she was determined to make sure we would grow into confident, proud black women.”

Harris’s expression of her racial identity allows for both groups to claim her as one of their own, but it is also a source of consternation among those who wonder why she often stresses her Black identity over her South Asian one, and it gives fodder to those who question whether she is Black or South Asian “enough.”

That Harris identifies primarily as a Black woman reflects one common way people with mixed ancestry see themselves: They emphasize the part of their identity that best reflects their family and everyday experiences. Harris’s Black identity made sense for her and her family in the American context she grew up in; it reflects her ancestry — that she was seen and treated as Black by her family and the community around her — and her everyday lived experience. Former President Barack Obama’s story is similar.

As long as there has been a United States of America, there have been mixed-race Americans

That Harris may be seen by many as Black and only Black has its roots in the American rule of “hypodescent,” or the one-drop rule, which dates back to slavery and functioned to make slave status heritable and maintain so-called white racial purity. Any person with white and nonwhite identity, especially Black, would be assigned to the lower-caste category; the same “rule” applied to other combinations, with Blackness trumping the other categories. This absurd and fundamentally racist practice is a testament to what was a far more common antipathy toward Blackness, the fear of interracial relationships, and the suspicions of mixed-race persons.

But that doesn’t mean all mixed-race folks choose a lane. Others intentionally identify as biracial, mixed race, multiracial, or some other category of their own making. Ultimately, it is a mixed person’s prerogative to be fluid in their identity, for them to sometimes hold one, or both, and for that to change over time.

In Harris’s and Obama’s cases, although they publicly prioritize one identity over the other, they do so while declaring love and respect for their varied familial and cultural roots, as we saw in Harris’s deeply personal and public use of the term “chittis,” which is Tamil for “aunts.” This is how mixed-race individuals navigate, and push back on, expectations of ethnic and racial belonging, loyalty, and authenticity that come in the form of questions, for example, about whether they are really Black or South Asian. Such accusations betray a simplistic essentialism about ethnic and racial identity. At worst, they are weaponized for the purpose of racist and xenophobic exclusion.

Harris and Obama do not explicitly identify as mixed race, yet their mixed ancestry appeals to large parts of their constituencies who identify with it or see in it a welcome cosmopolitan marker. Even if a large number of their supporters are not Black, South Asian, or mixed race, liberal elites might take superficial comfort in what they perceive as Harris’s and Obama’s class- or white-coded aspects that reassure them. Meanwhile, for some of their political opponents, their mixed ancestry is a focal point of racist and xenophobic objection, as we saw with the outrageous “birther” conspiracy theory about Obama, and with similar ridiculous claims about Harris’s Blackness or her not being a natural-born citizen and thus not eligible to run for president. But their actual stories are far more appealing than such delusions.

Harris’s personal narrative is not just a story of race or ethnicity or gender; it is a California story, just like Obama’s is a Hawaiian story (his parents met in 1960 at the University of Hawaii), their parents’ encounters made possible by the international and diverse conditions and the vibrant political atmospheres of their respective universities. Her story stands out, however, because it reflects the experiences of people who have interracial ancestry beyond Black and white. Harris’s story, which continues through her marriage and her status as “Momala,” illustrates the international, multilingual, interreligious, and multiracial families and identities that many Americans have.

That complexity is experienced in the individual lives of mixed-race persons; the fact that their identities are intersectional does not negate the internal or external conflicts they face over feelings of belonging and a sense of authenticity. In reaction to these challenges, mixed-race children develop their own particular form of double or triple consciousness and learn to code-switch across their identities. They adjust themselves — toggling one set of racially coded presentations up and another down between, for example, family at home and friends at school or work or house of worship — to fit in, to adapt to the demands of different familial, social, and communal conditions while asserting their belonging in each of them.

However, these adaptations set up mixed-race folks for the accusations that they aren’t being authentic or are taking advantage of their particular racial or color privilege, and their personal integrity and their group loyalty may be called into question. This is an especially sharp problem for young mixed-race people as they negotiate contemporary racial politics, and do their part to be anti-racist and check their privilege. Their situation as individuals who intentionally identify as mixed-race need not be stuck in the in-between-ness. Whether they resolve their experience by identifying with one or multiple categories, refusing to identify with any label, or idiosyncratically create their own (à la Tiger Woods’s portmanteau “Cablinasian”), they can live authentic lives.

It also is through the experiences of mixed-race people that we are reminded that identifying with different groups requires adaptability to what are at times contradictory perspectives and interests. These experiences show the value of refusing false and reductive myths of “purity,” whether racial, religious, or political. There is personal and social value in the stubborn or even absurd refusal to abide by society’s racial scripts, from bucking racial stereotypes to, for some mixed people, refusing any and all racial labels.

This pugnaciousness is reflected in Harris’s contentious record as a politician and a district attorney and her refusal to, as one of her advisers has said of her, conform to a “demographic archetype.” In an interview on The Breakfast Club, Charlamagne Tha God brought up the criticism Harris has received about her Black identity. “Some folks have a limited vision of who we are as Black people,” she responded.

This transgressive part of the story of mixed race in America is why some see it as a threat. It is also, though, why others see it as a promise. Among those who consider the very idea of “race” illusory, a myth born of racism, interracial relationships and the experiences of mixed-race persons put truth to the lie of race. The very idea of mixed-race people becomes a fantasy of dissolving racial distinctions. When this vision becomes attached to charismatic figures, as it was to Obama (though he rightly rejected that characterization), they are seen as post-racial icons of racial transcendence.

The less fever-dreamy version of this enthusiasm sees the rise of mixed-race identification and popular figures as evidence that race has become irrelevant and that racism has seen its last days. Both of these seemingly prophetic visions are myths that envision the washing away of our national sins. And they are both a bit ridiculous.

This is not to say that projects that seek to push back on American racial categories ought to be dismissed; they offer a valuable counter to dominant narratives that seek to conserve racial groups. All the same, seeing in mixed-race experiences some special dissolvent of our racial practices or divisions is fantastical.

It is a dreamworld and a political romance of the otherwise wonderfully banal fact of interracial relationships and mixed-race lives. It is a fairy tale that would have us believe that demography is political destiny and the mere increase in the number of Black and brown folks will bring about a new age, the flip side of the right-wing freakout over America’s demographic diversity. As the last election reminds us, simple visions of identity politics full of expectations of BIPOC intersectional solidarity are far from reality.

This is not what we should want from Kamala Harris. We should expect her to help lead our nation and deal pragmatically with our national crises. Her American mixed-race experience is a reminder that our personal identities, and family and community relations, are deeply complex. She should draw on that narrative, in addition to her political experience — not to stoke our fantasies of deliverance, but to magnify her empathetic appeals to this country during this period of dire political divides.

Ronald R. Sundstrom is a professor of philosophy at the University of San Francisco and the author of The Browning of America and the Evasion of Social Justice and the forthcoming Just Shelter: Gentrification, Integration, and Racial Equality.