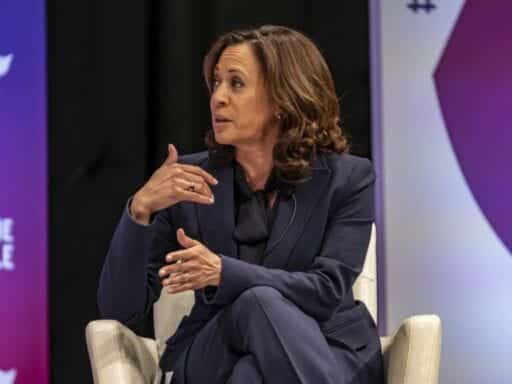 She addressed questions on criminal justice reform during a forum on Wednesday.

Sen. Kamala Harris may still face questions over her past record on criminal justice, but in an appearance Wednesday, she sought to focus squarely on future reforms, committing to pardoning low-level drug offenders if she becomes president.

“Absolutely,” she said when asked whether she’d use presidential pardon powers to release federal prisoners convicted of drug possession and drug-related crimes. “We have to have the courage to recognize that there are a lot of folks who have been incarcerated who should not have been incarcerated and are still in prison because they were convicted under draconian laws that have incarcerated them … for what is essentially a public health issue.”

During her remarks at a She the People town hall, Harris also condemned the war on drugs and reiterated her support for legalizing marijuana.

“There is the broader point about the failed war on drugs,” she said. “There is no question it was a failure, and part of the problem is that what was essentially a public health issue became a criminal justice issue.”

Harris noted that while the opioid epidemic is now being treated as a public health problem, the same can’t be said for the crack epidemic. “Now, thankfully, some have evolved around the opioid issue. But look, where were they when we had what was called the crack epidemic?” she asked.

Several of the points Harris raised are ones she addressed in her recent book, The Truths We Hold, in which she advocated for the end of the war on drugs and emphasized her support for policies legalizing marijuana.

Critics, however, note that these positions aren’t entirely consistent with ones Harris held previously. For example, as Tom Angell writes for Forbes, Harris laughed when asked about another candidate’s support for legalizing marijuana in 2014. She also did not back a California measure in 2010 that would have changed state law in favor of marijuana legalization. The broader conversation about marijuana legalization has shifted significantly in recent years, and Harris’s own viewpoints on the subject appear to have evolved with it.

As Vox’s German Lopez writes, Harris’s record as AG and San Francisco district attorney has also garnered criticism because it is filled with apparent contradictions. In some instances, Harris served to maintain the status quo, Lopez notes, even as she’s framed herself as someone who sought to champion reforms and change the system from within.

One such sticking point is an anti-truancy program she worked on, which critics say disproportionately targeted low-income families and levied hefty burdens on individuals already trying to make ends meet. Harris has said that this program was intended to curb high school dropout rates and help steer students away from crime.

Harris spokesperson Lily Adams pushed back against those criticisms of the senator’s record while speaking with Lopez.

“Kamala Harris has spent her career fighting for reforms in the criminal justice system and pushing the envelope to keep everyone safer by bringing fairness and accountability,” Adams said.

Political science experts have said Harris will have to reckon with her record as the 2020 primary continues. Proposing new policies, like those she raised on Wednesday, could offer one way for her to do so.

Hong Kong demonstrators defy lockdowns to protest a sweeping new national security law
America’s third Covid-19 surge, explained
Most Latinos voted for Biden — but 2020 revealed fault lines for Democrats
The Assimilationist, or: On the unexpected cost of passing as a trans woman
3 winners and 4 losers from a very long Election “Day”
Factory farms are an ideal breeding ground for the next pandemic