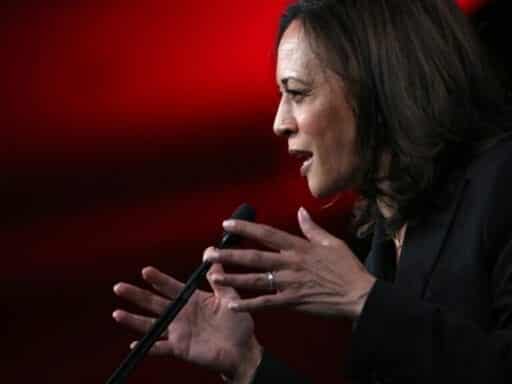 The new plan comes out of her experience confronting corporations as California’s attorney general.

Drawing on her track record of fighting the fossil fuel industry with the courts, Sen. Kamala Harris put forward a plan on Wednesday to address climate change by holding polluters to account.

One of several 2020 Democrats to unveil a climate proposal ahead of a CNN climate forum on Wednesday, Harris has a vision for how she’d get the country to carbon neutrality. She also revealed what she’d do to ensure existing social and economic disparities aren’t exacerbated in the process.

But the most distinct plank of her plan is founded on her experience as a prosecutor and her own efforts confronting corporations about environmental abuses.

During her time as California’s attorney general, Harris was one of the first AGs to investigate an oil company over a complaint tied to climate change: She opened a review into Exxon Mobil in 2016 to scrutinize the company’s framing of climate risks and at least two other states have done the same since. That same year, Harris sued the Plains All-American Pipeline over an oil spill off the California coast and won a major indictment. She also secured an $86 million settlement from Volkswagen for the State of California as part of its diesel emissions cheating scandal. And she defended President Obama’s signature climate policy, the Clean Power Plan, in court filings.

As part of her climate proposal, Harris indicates that she’d both bolster the Environmental Protection Agency’s efforts to enforce environmental protections — and that she’d reinforce plaintiffs’ ability to sue companies for harm they’ve incurred because of pollution, or other environmental misconduct. Harris is focusing on holding fossil fuel companies accountable by ensuring the EPA and the Department of Justice have the resources they need to pursue such cases, and codifying laws that guarantee plaintiffs’ standing to levy civil litigation if they’ve been “harmed by pollution.”

Her plan includes a directive to the DOJ to “address both cumulative and legacy pollution.” That means support for the agency to pursue civil and criminal prosecution of fossil fuel companies, a Harris spokesperson tells Vox. It’s a notable step and it’s similar to a component of Sen. Bernie Sanders’s Green New Deal, which would also direct his Department of Justice to pursue criminal prosecution of fossil fuel companies.

Still, this piece of Harris’s plan certainly stands out, and it’s one of five areas she’s focused on. In addition to a focus on legal recourse for corporations’ potential violations, Harris is calling for the expansion of clean energy tax credits, a massive influx of electric vehicles, and drastic reductions in buildings’ carbon emissions, as she pushes for the US to go carbon-neutral by 2045.

Much like Sen. Cory Booker, Harris is also highlighting the need for environmental justice, an approach that aims to apply environmental protections — and build new industries — in a way that ensures communities are treated equitably regardless of income and other characteristics, like race.

“It won’t be easy. It will be a fight against powerful interests. But I know we can get this done because this is a fight I have taken on before and won,” Harris said in a statement as part of her plan’s rollout.

While Harris was among the early co-sponsors of the Green New Deal, she hadn’t laid out an explicit proposal on climate change and was facing heat from climate activists as a result. Under pressure from campaigners, Harris canceled a fundraiser she had scheduled for Wednesday so that she can attend CNN’s seven-hour town hall on climate change for presidential contenders instead.

Her newest policy proposal aims to solidify her stance on this subject, and offer some more concrete detail on how she differs from the rest of a crowded 2020 pack.

Harris places a major focus on corporate accountability, and cites her experience as AG as evidence she’ll follow through

One of the biggest assets Harris has going for her approach to climate change is her work on the issue as California attorney general. Not only does she reference her prior efforts to hold corporations accountable, she makes it clear that enforcement and prosecution of fossil fuel companies is something she intends to focus on as a key prong of her plan. In a Harris administration, the EPA would get an infusion of funding for enforcement, and the DOJ would also have the resources to take the fight to fossil fuel companies.

Her law-centered proposal comes at a time when people are increasingly turning to the courts to drive action on climate change. A wave of lawsuits is now underway from cities, counties, and states suing oil fossil fuel producers for contributing to damages stemming from climate change like rising sea levels. Another major lawsuit filed by young people argues that the US government has violated the civil rights of future generations by abetting industries that contribute to climate change.

The fossil fuel industry in turn is taking the threat of climate change litigation seriously. Exxon Mobil last year launched a lobbying push for a carbon tax with the stipulation that the company gain immunity from such lawsuits.

As president, Harris vows to make it easier for people to sue for climate damages. “Access to the courts is fundamental for Americans to hold polluters accountable,” according to her climate plan. “By statutorily reinforcing standing for those harmed by pollution and strengthening counsel-access provisions, we can protect access to the courts for citizens seeking restitution for environmental and climate-related damages.”

Harris lays out a rapid timeline for carbon neutrality

The often-invoked deadline for carbon neutrality comes from a 2018 review by the Intergovernmental Panel on Climate Change which emphasizes that countries will need to go carbon-neutral by 2050, in order to keep increases to the Earth’s temperature below 1.5 degrees Celsius this century.

Harris’s proposal, similar to those of other 2020 counterparts, aims to hit this goal more quickly — and sets 2045 as its deadline. In order to nail this milestone, Harris has a roadmap for getting to carbon-neutral power by 2030 and carbon-neutral passenger vehicles by 2035.

She would do this by expanding clean energy tax credits, building out infrastructure for clean energy storage and backing a green climate bank (proposed by Democratic Sens. Ed Markey and Chris Van Hollen) that would help provide financing for local projects.

Additionally, she’s proposing a massive overhaul when it comes to the kinds of vehicles that are on the road. Her plan would invest in electric buses and a broader expansion of public transportation that’s aimed at curbing car usage. It would also expand the electric vehicle tax credit to compel more people to invest in such options.

In all, the shift to clean energy infrastructure is expected to cost a $10 trillion investment from public and private sources. According to a Harris spokesperson, $3.3 trillion of that money is estimated to be federal spending, though it’s not immediately evident what the sources of funding would be. The campaign estimates that these developments could result in millions of new jobs, though the exact number is unclear.

Harris highlights the problem through a lens of existing disparities

Radically reshaping the economy toward clean energy and away from fossil fuels, as the Green New Deal — and other similarly transformative plans — resolve to do, runs the risk of worsening existing inequities. As Vox’s David Roberts writes, this is a huge issue that’s explicitly mentioned in the GND congressional resolution from Ocasio-Cortez and Markey, and it’s one they include provisions to address:

Several people I talked to stressed that they want to avoid the mistakes of the original New Deal, many elements of which entrenched or exacerbated racial inequalities. Everyone wants to make sure that the plan includes protections for those hardest hit by historical discrimination and those set to suffer most from the effects of climate change — in Ocasio-Cortez’s document, “low-income communities, communities of color, indigenous communities, [and] the front-line communities most affected by climate change, pollution, and other environmental harm.”

The potential for uneven gains during a transition is one of the chief concerns. The jobs gained in installing solar won’t necessarily replace jobs lost in coal mining, for example. And low-income workers locked out of necessary training opportunities might not be as prepared for a complete shift in their industry. Additionally, communities that have historically been hurt the most by climate change and pollution might not be the focal point of benefits that environmental laws seek to provide.

Several 2020 Democrats, including Booker and Sen. Bernie Sanders, have highlighted the equity issue, and Harris is making it a pillar of her policy proposal. There are a few pieces of legislation she’d try to push through to tackle the problem:

1) The Climate Equity Act: A bill Harris is sponsoring with Rep. Alexandria Ocasio-Cortez, the Climate Equity Act, would require all environmental policies to be rated with an “equity score” that considers how they would affect frontline communities. Frontline communities, like those along the Gulf Coast, are those expected to bear the early brunt of climate change impacts and tend to be disproportionately low-income and comprised of people of color.

The “equity score” would help ensure that policies that aim to address climate change don’t pose additional harm to frontline communities, and include representatives and advocates from these places as part of the conversation. It would also set up a federal Office of Climate and Environmental Justice Accountability.

2) The Water Justice Act: Harris would also back the Water Justice Act, a bill she’s sponsored that invests $250 billion in repairing water-related infrastructure in cities across the country including Flint, Michigan, and Newark, New Jersey. These funds would also be used to help rural households improve their access to water systems as well.

Booker has championed environmental justice legislation that would more closely monitor how facility permits in different places are violating laws like the Clean Water Act, which Harris says she supports as well. Additionally, her plan highlights the need to include Native American communities in the larger debate about climate change policy and protecting natural resources that overlap with tribal lands.

“It’s very comprehensive and the focus on climate justice, environmental justice, the lens that the proposal looks through is really important,” Ellen Vaughan, a policy director at the Environmental and Energy Study Institute, told Vox, of Harris’s plan. “Trying to bring everyone into the decision making process [is crucial].”

Vox Sentences: Hurricane Florence heads to the East Coast
Scott Pruitt gave “super polluting” trucks a gift on his last day at the EPA. A court just put it on...
Why pandemics activate xenophobia
In the 1970s, “Mamma Desta” turned Ethiopian food into an American fascination. So why did fame elud...
Trump really doesn’t want to talk about his health care record
Kristin Lavransdatter is an amazing novel about how God doesn’t care if we live or die