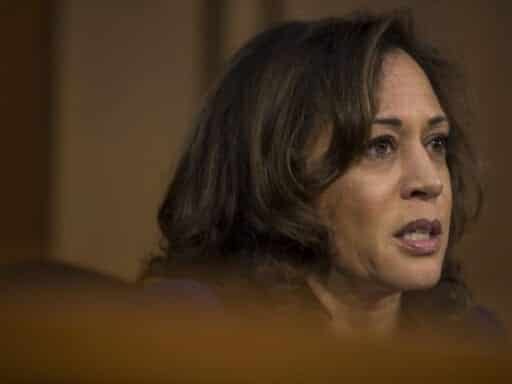 She was trying to call out Trump’s Supreme Court nominee about a meeting that may have happened.

Sen. Kamala Harris (D-CA) on Wednesday had the entire hearing room on tenterhooks, as she opened her questioning of Supreme Court nominee Brett Kavanaugh with a somewhat mysterious inquiry. Her question centered on a meeting Kavanaugh may have had about the Mueller investigation — with a member of a law firm founded by President Trump’s personal lawyer.

A meeting like this could underscore an inappropriately cozy relationship between Kavanaugh and the Trump administration, adding yet another potential conflict of interest to those that Democrats have been hammering throughout the hearing. And it’s one that a Democratic aide told Vox they believe might have taken place. (Democrats have argued that Kavanaugh’s nomination by Trump already poses a conflict of interest since he could potentially rule on elements of the Russia investigation.)

Kavanaugh, meanwhile, didn’t do much to settle the issue as he repeatedly deflected questions on the subject.

“Have you discussed the Mueller investigation with anyone at Kasowitz Benson Torres, the law firm founded by Marc Kasowitz, President Trump’s personal lawyer?” Harris asked. “Be sure about your answer, sir.”

Harris continued this line of questioning for roughly five minutes, a move that not only seemed to make Kavanaugh uncomfortable but also elicited some broader confusion in the hearing room since she declined to provide immediate specifics about a person or meeting. “I think you’re thinking of someone and don’t want to tell us,” she said.

You can watch the full exchange below.

CSPAN has posted the entire nearly 8-minute exchange between Kamala Harris and Kavanaugh on the Mueller probe. It is worth your time. pic.twitter.com/ezJVEuDeUK

At one point, Sen. Mike Lee (R-UT) intervened on Kavanaugh’s behalf and noted that there are many attorneys staffed at various private law firms in Washington, DC.

There’s suspicion that a meeting did, in fact, happen and Harris was trying to get Kavanaugh to talk about it

It turns out that Harris, who spent much of her career as a prosecutor in California, was working off information that Kavanaugh may indeed have met with someone from this firm — a move that could underscore his ties to Trump. Additionally, if Kavanaugh denied a meeting and evidence later emerges that one did happen, he could very well have perjured himself, and it’s possible Harris was putting him on the spot in order to catch him on the issue while he’s under oath.

“We have reason to believe that a conversation happened and are continuing to pursue it,” a Democratic aide tells Vox. It is still unclear, as of yet, how many concrete details there are to back this up.

Observers of the hearing wondered if Kavanaugh’s bumbling response was simply a ploy to avoid offering a damning response, while others suggested that the gambit was an effective way for Harris to generate buzz ahead of 2020. Chances are Harris will push this point again in the second round of questioning on Thursday.

Colleges say campuses can reopen safely. Students and faculty aren’t convinced.
What to do if you’re over 70 and running for president in a coronavirus outbreak
Fauci’s Senate testimony debunked a number of Trump’s favorite coronavirus lies
Presidents hate to look sick. Trump has never needed to appear strong more.
Disruption has come for toilet paper
Ocasio-Cortez invites the US women’s soccer team to the House of Representatives