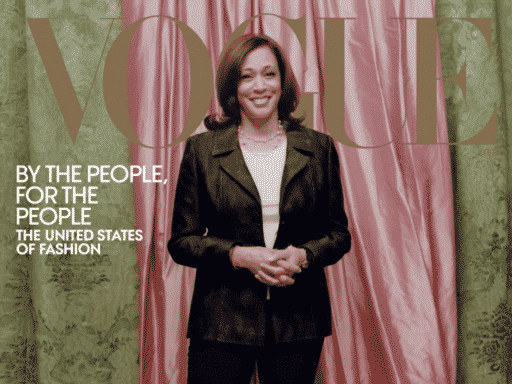 By placing the nation’s first woman vice president front and center on its February cover, Vogue sought to grandly usher in the next administration.

Instead, the final cover photo of Kamala Harris for the magazine’s print edition was received as underwhelming and, to some, disrespectful. Many say it is a misstep typical to the magazine under the eye of Anna Wintour, who has long faced accusations of racial insensitivity. The social media response toward the Harris photo shoot — which was leaked before the magazine’s official announcement — has veered toward incredulity.

The vice president was photographed in a full-body shot, where she stands, hands clasped in front of her waist, against a backdrop of pink and green silk drapes, an allusion to the colors of her Alpha Kappa Alpha sorority. She is dressed in a similar style as her outfits on the campaign trail: dark blazer, black slim-leg pants, white tee, and black Converse sneakers.

But many point out that Harris’s smile appears unnatural and almost forced — the sort of awkward smile a subject flashes when they’re unsure of how else to pose — and her body language looks similarly uncomfortable.

There is nothing clearly offensive or wrong about the image. The Washington Post’s Robin Givhan even described it as “an audacious way of depicting this new political era and its break with the past.” The problem is that it will be published on the cover — reportedly against the will of Harris’s team. Compared to the second digital cover Vogue released alongside its print selection, the stylistic imbalance between the photos is explicit. In the secondary image, Harris is dressed in a powder blue Michael Kors pantsuit; her arms are folded across her chest, and she smiles confidently at the camera before a golden drape backdrop.

The latter is clearly a more suitable photo to represent a vice president. The shot communicates authority, power, and a sort of political glamour commonly seen in images of high-profile politicians. That is also why so many social media users assumed the print cover was a joke. “I thought it was fake — that’s how bad it is,” one Twitter user wrote. Vogue’s cover stars are typically airbrushed to perfection, with nary a stray hair or enlarged pore in sight. Beyond the photo selection, some claim the editing job of the print cover is messy, leading the vice president to look “washed out” and lighter than her original skin tone.

The photographs were taken by Tyler Mitchell, who made history in 2018 as the first Black photographer to shoot a Vogue cover. The editor who oversaw the shoot, Gabriella Karefa-Johnson, and the writer of the cover story, Alexis Okeowo, are also Black. Yet the final editorial decision was made by the Vogue team, whose opinions are reflective of — or heavily influenced by — Wintour, its controversial longtime editor.

Several news outlets, including the Associated Press and CNN, reported that Harris’s team felt “blindsided” by Vogue’s selection and was unaware that the magazine switched out the cover photo from what the team originally agreed on. Vogue’s intentions with its cover, as clarified in a public relations statement, were to highlight the vice president-elect’s “authentic, approachable nature,” adding that it released both images to “respond to the seriousness of this moment in history, and the role [Harris] has to play leading our country forward.”

Despite the publication’s stated best intentions, Vogue’s protracted history of racism (which Wintour has previously apologized for) is impossible to ignore. For decades, the magazine has excluded and underpaid Black talent, and published racially insensitive images and stories. This casual image of the woman who will be America’s first woman vice president seems to add to the narrative of Vogue’s lack of respect for women of color, even one who has risen higher in the American power structure than any other woman in US history. There was considerable labor and forethought put into crafting the vice president-elect’s cover shoot, but the final product — through Vogue’s traditional editorial process — appeared perfunctory.

“The cover did not give Kamala Harris due respect. It was overly familiar,” wrote Givhan. “It was a cover image that, in effect, called Harris by her first name without invitation.”

Here is a tape of Michael Cohen and Trump talking about a payoff to a former Playboy model
How chaos theory helps explain the weirdness of the Covid-19 pandemic
The most important book I’ve read this year
Remember Brexit? It just got one step closer to happening.
How reality caught up with the reality TV president
Area 51 and aliens: the myth, the meme, and the strange reality, explained