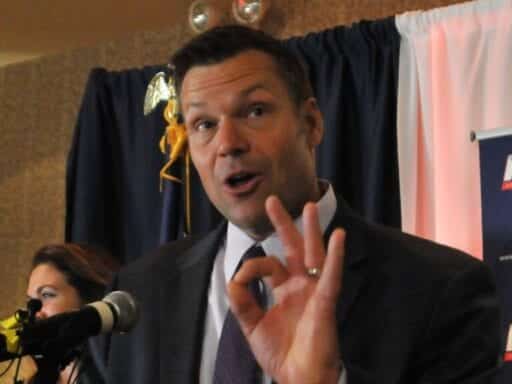 The race for the Republican nomination for governor in Kansas is incredibly close — current Gov. Jeff Colyer is trailing challenger Kris Kobach, the controversial Kansas secretary of state, by just 191 votes with all precincts reporting but before provisional ballots are counted.

That’s a margin of just 0.06 percent of all votes cast. So will the race head to a recount?

It’s up to Colyer and Kobach. Kansas doesn’t have an automatic recount, but a candidate, registered voter, or election officials can initiate a recount by asking for one. If the margin in a statewide race is less than 0.5 percent, as it is in this case, the state will pay for it.

So far, neither candidate has announced that he’ll ask for a recount.

According to Kansas law, the county board of canvassers can initiate a recount if it “shall determine that there are manifest errors appearing on the face of the poll books of any election board.” Candidates can request a recount in one or all districts that are relevant to their office, and registered voters can do the same, according to Kansas State Law.

If a losing candidate triggers the recount and the margin between them and the opponent is less than 0.5 percent, the county or state pays for the recount. The candidate also doesn’t have to pay if the recount alters the outcome of the election.

The close margin isn’t necessarily a surprise: The race between Kobach and Colyer, who took over as Kansas governor when Sam Brownback left to join the Trump administration as a religious freedom ambassador, was tight in the polls leading up to Election Day.

Kobach, who President Donald Trump endorsed on Monday, made a name for himself nationally as a crusader against illegal immigration and voter fraud, including leading Trump’s ill-fated voter fraud commission (an effort built on false claims).

In the days leading up to the election, the Topeka Capital-Journal reported that two GOP consultants were accusing three members of Kobach’s campaign of being white nationalists, and ProPublica and the Kansas City Star reported that Kobach had enriched himself by urging towns to pass anti-immigration ordinances while the towns lost hundreds of thousands of dollars defending the laws in court.

Even those revelations, it seems, might not have been enough to sink Kobach’s candidacy.

Vox Sentences: Uh-oh, NATO
13 found-footage horror movies actually worth watching this Halloween
In quarantine, social media has become a battleground between the wealthy and everyone else
The big lesson from South Korea’s coronavirus response
How bookstores are weathering the pandemic
Partisanship is the strongest predictor of coronavirus response