Kanye West delivered a pro-Trump rant on SNL. The audience booed, but he earned Trump’s praise. 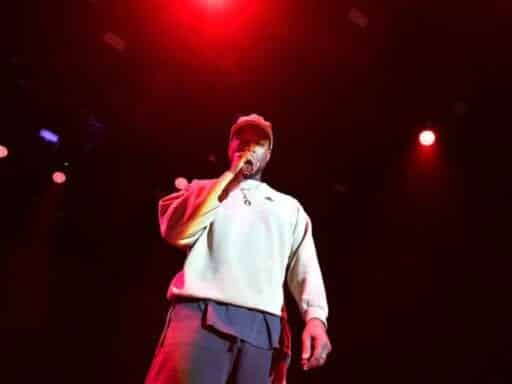 There was a lot President Donald Trump didn’t like about this weekend’s Saturday Night Live premiere, including, presumably, Matt Damon’s screaming and crying Brett Kavanaugh impression and Kate McKinnon’s “Ruth Bader Gins-burns.” But there was one part he did enjoy, according to his Twitter account: the performance by rapper Kanye West.

West, who prior to Saturday’s show declared that he now prefers to go by “Ye,” performed three songs on SNL, including a new song, “We Got Love.” While his musical performances made it to air, an impromptu monologue, in which he spoke about Trump, did not.

After West’s final performance, when he and cast members gathered on stage to end the episode, he started talking to the audience — and continued. The show had already gone off the air.

He started off by singing, “I wanna cry right now. Black man in America, you’re supposed to keep what you feel inside right now. And the liberals bully you and tell you what you can and cannot wear, where you and they can’t not stare. And they look at me and say, ‘It’s not fair. How the hell did you get here?’ Well…”

Wearing a Make America Great Again hat, he then delivered an unexpected speech in front of SNL performers like Colin Jost and host Adam Driver as some audience members booed. “Actually, blacks weren’t always Democrats,” he started. “It’s like a plan they did to take the fathers out the homes and promote welfare. Does anybody know about that? That’s the Democratic plan.”

He warned that people can’t be controlled by “monolithic thought” and mentioned disgraced comedian Bill Cosby. “You can’t always have when you have a black subject matter like Cosby that you have to have a black comedian talk about it,” he said.

He also, per People, brought up Trump. “It’s so many times that I talk to a white person about this, and they say, ‘How could you support Trump? He’s racist.’ Well if I was concerned about racism, I would have moved out of America a long time ago. We don’t just make our decisions off of racism. I’ma break it down to you right now: If someone inspires me and I connect with them, I don’t have to believe in all they policies.”

A separate video posted on YouTube appears to have captured the end of West’s speech, in which he encouraged the band to start playing again and got the people on stage to dance and sing.

Comedian Chris Rock captured portions of West’s speech and posted it on Instagram. In part of the clips, you can hear Rock whispering, “Oh, my God.”

West also brought up that he’s considering running for president in 2020. At points during his monologue, there was sparse clapping. At other moments, there were boos.

Trump, who has made a habit of complaining about SNL on Twitter, took to the social media platform on Sunday to slam this week’s premiere — with the exception of West. The skit show is “no longer funny, no talent or charm” but is instead a “political ad” for Democrats. “Word is that Kanye West, who put on a MAGA hat after the show (despite being told ‘no’), was great,” Trump wrote.

Like many, I don’t watch Saturday Night Live (even though I past hosted it) – no longer funny, no talent or charm. It is just a political ad for the Dems. Word is that Kanye West, who put on a MAGA hat after the show (despite being told “no”), was great. He’s leading the charge!

This Trump-Kanye thing has been going on for a while

West’s comments about the president — and the president’s comments about him — have been a bit of a befuddling subplot of the Trump era. The rapper and fashion magnate, who declared President George W. Bush “doesn’t care about black people” in the wake of Hurricane Katrina in 2006, has acted warmly toward Trump, who has a long history of racist positions and remarks.

As Vox’s Constance Grady wrote back in December 2016, West and Trump have expressed a mutual fascination with one another for quite some time:

Kanye has referenced Trump three times in his lyrics, primarily as a shorthand for the idea of wealth, luxury, and the ability to fire people. The first reference came in 2005 when Kanye freestyled on the YouTube channel Tim Westwood TV (“I ain’t no clown like Ronald / Uh, more like Donald / Trump, with the way I get it crunk”), then in 2009’s “Flashing Lights (Remix)” (“You fired mothafucka Donald Trump ni**a”), and then in 2010’s “So Appalled”(“Balding Donald Trump taking dollars from y’all / Baby, you’re fired, your girlfriend hired”). He also featured a naked depiction of Trump in the bed tableau that appears in the video for his song “Famous,” which debuted earlier this year.

All of that adds up to four Trump references in seven years. (For comparison’s sake, that’s more than Kanye has referenced, say, Givenchy, but less than the 12 times he’s mentioned Gucci in his lyrics.) In Kanye’s songs, Trump is a symbol of the kind of wealth and power that American culture generally withholds from black men: He has the kind of decadent wealth that you can use to party with, but he can also control other people’s employment, hiring and firing them at will.

West went to Trump Tower in New York City when Trump was first elected to meet with the then-president elect. West and Trump engaged in a sort of Twitter love-fest this Spring, exchanging praise online. (It was around the same time that West declared that slavery was a “choice,” for which he later apologized.)

In August, late night host Jimmy Kimmel asked West in an interview why he’s been so friendly with Trump.

“It’s not about policies, because I’m not a politician like that,” West told Kimmel, saying that it had taken him “a year and a half” to work up to wearing a MAGA hat. “It represented overcoming fear and doing what you felt no matter what anyone said, and saying, ‘You can’t bully me,’” he said.

Kimmel then referenced his Bush comments. “You’ve so famously and so powerfully said, ‘George Bush doesn’t care about black people.’ It makes me wonder: What makes you think that Donald Trump does, or any people at all?” he asked.

Barcelona is pushing out cars and putting in superblocks. Here are the 2 biggest challenges ahead.
Ohio’s attorney general told providers to stop abortions during the coronavirus pandemic
California’s attorney general gave a scathing Spanish-language rebuttal to Trump’s speech
Why new restaurants are still, somehow, opening during the pandemic
Barstool Sports is close to selling to a casino company you’ve never heard of
When polls close on March 17 — and when we might get results