Kanye West says he wants nothing to do with Blexit apparel 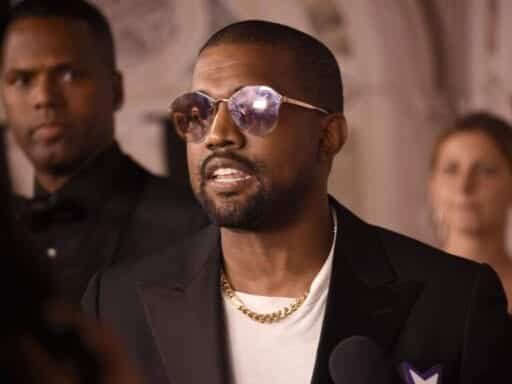 Kanye West is at it again — or is he? After meetings with President Donald Trump, a controversial rant on SNL, and insinuating that slavery was a choice for African Americans, his latest controversy involves his supposed link to the new “Blexit” shirts being hawked by conservatives. The term “Blexit” is a portmanteau (“black exit”) that plays on Brexit (“British exit”) and refers to African-American voters leaving the Democratic Party.

The shirts made the rounds Saturday at the conservative group Turning Point USA’s Young Black Leadership Summit in Washington, DC, and are being sold at Blexit.com. The site also sells merchandise with the logo “We Free,” likely a riff on the offensive conservative talking point that blacks are “slaves on the Democratic plantation,” and a baseball cap with a figure shaped like an X in what may be an odd allusion to the Malcolm X gear that became trendy in the 1990s.

While West didn’t attend the summit, TPUSA spokesperson and conservative pundit Candace Owens told the New York Post he was behind the designs.

“Blexit is a renaissance, and I am blessed to say that this logo, these colors, were created by my dear friend and fellow superhero Kanye West,” she told the publication. “[He] has taken one of the boldest steps in America to open a conversation we have needed to have.”

But after West started to get negative press because of the shirts, Owens backtracked on exactly what his role was in the design process, saying West merely helped connect her with a designer.

#BLEXIT is about the beautiful stories of so many black people who have awakened themselves to the possibilities of our future, as Americans.

The press is trying to use Kanye’s name to create drama and further divisiveness which is WRONG.

Here is statement of clarity from me: pic.twitter.com/PJSdM2PRFi

On Tuesday, West tweeted that he had “nothing to do with” the merchandise and “never wanted any association with Blexit.”

I introduced Candace to the person who made the logo and they didn’t want their name on it so she used mine. I never wanted any association with Blexit. I have nothing to do with it.

Vox reached out to Blexit for comment about West’s remarks and will update when we hear back. While his exact connection to the Blexit merchandise is still unclear — he says he merely introduced Owens to the person who designed the logo — the bigger question is why Owens is calling Blexit a “renaissance” to begin with.

The Blexit merchandise is certainly eye-catching: Shirts come in push-pop orange and bright teal with neon accents. There’s even a distressed denim cap with the Blexit motto. And everything costs less than $28.

“To tell us we only have one choice for a political party is quite frankly BS, and I don’t buy it anymore,” he says, adding, “It is time that we start demanding that people work for our vote.”

I want to see a @MarkDice video where he is wearing a BLEXIT shirt while walking among the leftist zombies. #JobsNotMobs #RedWave2018 #GOP2018 #VoteRedInNovember #MobRuleDemocrats #MobRule #Trump #RedTsunami #BLEXIT pic.twitter.com/vCQ2POY55P

But behind the expertly designed merchandise and testimonies peppered with refried GOP talking points about African Americans — crime in Chicago, victim mentality, aborted black babies — the Blexit website provides few reasons why a black person should vote Republican, or at all. Especially as Republican President Donald Trump has found himself in repeated controversies related to white nationalists and Republicans across the country are making it more difficult for people to vote through measures like voter ID laws.

The site also links to articles in a way that misrepresents race relations, political parties, and legislation historically. The materials appear to be designed to sway readers into thinking that the Democratic Party today is the same as the Dixiecrats of years past. For the record, some states — including California, where I live — allow people to register to vote without stating a political preference, so they can cast their ballot for whichever party they feel best serves their interests in any given election.

West seems to be fluid in his political views. Although he’s endorsed Trump, he also recently donated $73,540 to the Chicago mayoral campaign of Amara Enyia, a Democrat. In September, he raised eyebrows for pairing a MAGA cap with a sweater emblazoned with the name of Colin Kaepernick, the activist-athlete the president described as a “son of a bitch.” When he’s not throwing his support behind people with wildly different political outlooks, West is managing to spur backlash by pondering whether, for instance, the 13th Amendment, which abolished slavery, should be revoked.

When he distanced himself from the Blexit movement Tuesday, he suggested he’d been taken advantage of by political advocates, though he didn’t name names.

“My eyes are now wide open and now realize I’ve been used to spread messages I don’t believe in,” West tweeted. “I am distancing myself from politics and completely focusing on being creative!!!” Time will tell what this means for his previously expressed interest in running for president.

This week in TikTok: Every influencer wants a reality show
California has been passing tough animal welfare laws. A court just handed the state a big victory.
Trump just commuted Roger Stone’s sentence
A Trump appointee at the CIA urged the Justice Department to investigate Trump on Ukraine
Why Sorry to Bother You director Boots Riley thinks artists should be activists
3.9 million years