Kathleen Turner dragged a high-paid actress for having no range. Here’s who it might be. 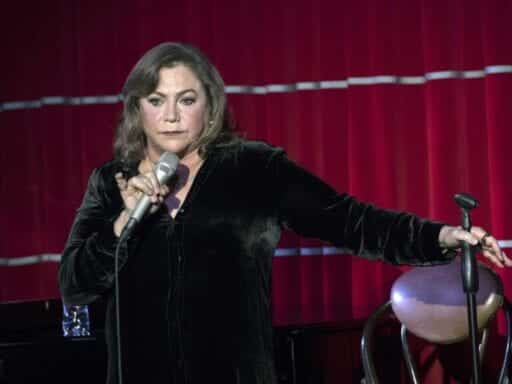 Turner, the legendary actress whose voice is equal parts smoke and razor, spoke to Vulture in an interview that touched on many things, including Nicolas Cage’s strange voice in Peggy Sue Got Married, why Elizabeth Taylor’s performances hit such nerve with her, and how Michael Douglas, Warren Beatty, and Jack Nicholson were all in on a competition to bed her first. But much of the online conversation around the interview has settled on one particularly scalding point: the identity of a [very famous Hollywood actress] who has irked Turner for the past 20 years.

“I’ll give you an example, but you mustn’t include her name,” she told interviewer David Marchese, who kept his end of the bargain and redacted the actress’s name. “[Very famous Hollywood actress] has played the same role for 20 years. She even looks pretty much the same. She’s probably one of the richest women out there, but I would shoot myself if I were like that, only giving people what they expect.”

In keeping the actress’s name a secret, Vulture and Turner have ignited a multi-pronged mystery: Who is “very famous Hollywood actress,” what roles has she played (without variation, as Turner would tell you) that have offended Turner so much, and what are the other reasons Turner could resent her?

The thought of the iconic Turner flipping channels while reclining on her chaise longue, accidentally landing on TBS, then throwing a rare bone-in rib-eye at the star of, say, Miss Congeniality 2: Armed and Fabulous warms the heart — and the lingering mystery around that imagined scenario tears at the soul.

This quote is going to be the “You’re So Vain” of celebrity interviews and I hope Kathleen Turner eventually auctions off the answer for charity.

Everyone seems to have their own completely speculative and unscientific ideas about the target of Turner’s ire — and we are no exception! So we’re sharing our best guesses as to the identity of this terrifyingly rich, beautiful, age-defying mystery actress who has, in Turner’s mind, done acting a great disservice by always playing herself. Here they are, arranged by ascending likelihood:

Of the actresses of Turner’s generation who were truly huge stars, only Pfeiffer comes close to Turner’s description. At 60, she is just four years younger than Turner, but she’s held on to her glamour-girl image, as well as her high-caliber career, for decades.

In terms of star power, however, Pfeiffer hasn’t helmed a major box office hit in nearly 20 years, since the thriller What Lies Beneath saw her battling ghosts in 2000. We’re guessing Turner probably hasn’t been paying attention to her meaty recent dramatic work (Mother!) or her small role in Ant-Man and the Wasp. But for Turner, that probably means Pfeiffer is out of sight, out of mind. —Aja Romano

Turner describes the actress in question as “probably one of the richest women out there,” which makes Nicole Kidman, whose net worth is estimated at around $259 million, a possibility. Kidman’s also been in the public eye for nearly 30 years — her breakout was 1989’s Dead Calm — which means she’s been a movie star long enough to conceivably catch Turner’s attention both 20 years ago and today.

But is Kidman the actress who comes to mind when you think of someone who plays the same role again and again, who never challenges the audience and only gives them what they expect? Nah. She has a type, sure — people love to cast her as an ice queen — but she’s covered an incredible range over the course of her career, from the tragic courtesan of Moulin Rouge to the villainous taxidermist of Paddington. We’d like to think Turner would respect Kidman too much to anonymously trash her. —Constance Grady

Turner allows that her target “looks pretty much the same” as she did 20 years ago, and Witherspoon, who appears not to have aged or changed up her look since her Legally Blonde days, certainly fits the bill. Witherspoon is also one of the few actresses who has been consistently famous for long enough that Turner would conceivably have noticed her 20 years ago and still be thinking about her during interviews now.

Moreover, while Witherspoon certainly has range, she is associated with a very specific type. The type was even named after one of her characters: the Tracy Flick type, the Type A overachiever that Witherspoon channeled to perfection in Election and has played with variations again and again over the course of her career.

We’re not saying that Witherspoon only ever plays Tracy Flicks, because hello, we saw her in Wild. But we are saying that it’s in the realm of possibility that if you’re not a Reese Witherspoon aficionado — and who can say that Kathleen Turner is? — you might think of her vaguely as someone who plays the same type a lot. —CG

Could it be Sandra Bullock? Of the crop of actresses who were emergent in the mid-’90s, when Turner’s star was on the wane, only Julia Roberts (more on her in a moment) and Bullock have maintained true mega-celebrity status while turning in notable, if not iconic, performances in every decade since.

Like Roberts, Bullock still looks essentially the same as she did in the ’90s. More crucially, she’s been able to retain her long-running image as America’s hapless but charming comedic sweetheart since she first won our hearts in Speed way back in 1994.

If you discount Gravity — or even if you don’t — and you’re of a mind to be reductive, you can fit most of her roles into a generically bland girl/wife-next-door mode. Of these recent roles, probably the one running most against type is her abrasive, high-powered boss in 2009’s The Proposal — but given that the film also reestablished her place as queen of the rom-com, it probably wouldn’t have altered whatever vague impression Turner had of Bullock’s career.

There’s one obvious mark against Bullock, however, given all the other names on this list: Does Turner even have the time of day for brunettes? —AR

But that doesn’t mean that Kathleen Turner knows that.

That’s because it’s kind of a cliché to say that Julia Roberts doesn’t have range. Whenever people explain the difference between the chameleon-like “true actor” who can disappear into any role — generally considered the career path to aspire to — and the more glamorous but less artistically impressive “movie star” who plays the same role again and again, Julia Roberts is the go-to example of the movie star. Fair? No. Common? Absolutely.

Moreover, Roberts is exactly the kind of actress Turner might resent, because Roberts became famous just at the moment that Turner’s career was beginning to lose heat. Roberts represents a kind of changing of the guard, and it’s entirely plausible that Turner might still dislike her because of that.

It’s true that the peak of Roberts’s movie stardom was more than 20 years ago — Pretty Woman came out in 1990 — but we don’t think that Turner was doing especially careful math when she made this off-the-cuff assessment. Probably Turner is like the rest of us, and when she considers that 20 years ago was 1998, she wants to crumble into dust and die of exhaustion, so instead she loosely guesstimates that the early ’90s were, you know, about 20 years ago.

Anyway, we’re not implying that Roberts is a bad actress, because she’s not. But we are implying that Turner maybe thinks she is. —CG

Aniston’s got the iconic look, the star power, and the ageless face to land her at the very top of this list — that is, until you consider that her star rose through television rather than film.

Looking at her track record on the silver screen after leaving Friends and Rachel behind, Aniston’s not exactly delivering the box office returns of a Julia Roberts or a Sandra Bullock. In fact, Aniston may be one of the very few high-powered actresses to have maintained her incontestable place on the A-list despite a movie career that’s been, shall we say, spotty.

Sure, she had a string of semi-successful, semi-shoddy rom-com successes in the aughts, but the studio comedy work she’s been doing since then has been, while occasionally profitable, not especially lauded; it’s not very likely Turner would be grabbing a chair for Horrible Bosses or We’re the Millers.

But as Meredith Haggerty, editor at the Vox sister site Racked, pointed out on Twitter, there’s another reason Turner may be particularly attuned to Aniston’s career:

I think it’s my love, my life Jen Aniston because Kathleen remembers her from playing (cringe) Chandler’s dad on Friends. Sorry, sorry, I’m trying to delete the 90s. https://t.co/Gthl2PxrRK

Ah, yes, that wince-worthy gag we never wanted to remember, on a sitcom Turner herself says “hasn’t aged well.” In her Vulture interview, Turner admits that she “didn’t feel very welcomed” by the cast of Friends, and when asked to comment on their acting abilities, she pointedly declined.

Their connection through Friends, just as Aniston was at the height of her popularity, would definitely have made a lasting impression on Turner — perhaps enough to cause Turner to overlook Aniston’s subsequent career missteps. Add in the way Aniston continued to dominate the cultural narrative as the girl-next-door in the epic Brangelina triangle throughout the aughts and it’s easy to arrive at the conclusion that to Turner, Aniston’s star is as pointy as it’s ever been. —AR

Iraqi Parliament approves a resolution on expelling US troops after Soleimani killing
These apps make a game out of relieving anxiety. They may be onto something.
Stephen Miller's D.C. home a target of immigration policy protest
The High Note’s ambitions aren’t as big as its characters’ dreams. But it’s still fun.
The world already had low views of the US due to Trump. The debate didn’t help.
How Heroes of the Fourth Turning, about Catholic intellectuals, became one of fall’s buzziest plays