Kavanaugh bragged about his clerks’ diversity. His legal record is another story. 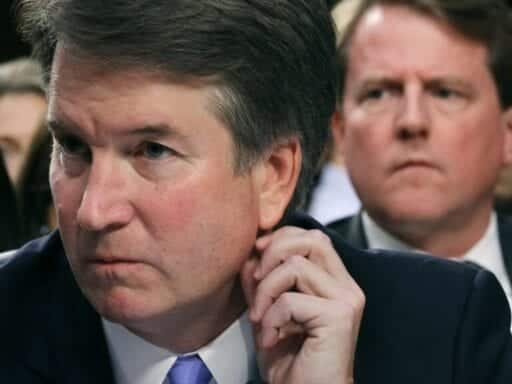 Supreme Court nominee Brett Kavanaugh highlighted his own dedication to hiring and promoting women and people of color during his confirmation hearing, but his record on voting rights, workplace discrimination, and affirmative action tell a different story.

Conversely, a number of his judicial decisions and legal moves seem to directly contradict his self-stated commitment to advancing gender and racial diversity.

Even as Kavanaugh has gone out of his way to emphasize his focus on recruiting women and minority clerks in his role as a judge, he’s made the case that programs like race-conscious college admissions don’t have the full backing of the Constitution.

The core of much of his legal reasoning is a preference for “race-neutral” policies, an approach that often reinforces existing discrimination.

Kavanaugh has touted his own hiring practices

Kavanaugh repeatedly said he was personally dedicated to hiring women and minorities throughout his confirmation hearing this week.

During an exchange with the nominee on Wednesday, Sen. Orrin Hatch cited a letter from 18 female law clerks who offered their backing of his nomination and noted that he was the first judge on the DC Circuit to employ a cohort of all women law clerks. “There’s a pipeline problem,” Kavanaugh said. “As I’ve said, I’m breaking through that problem.”

Kavanaugh also detailed his efforts to hire diverse law clerks. “My law clerks come from diverse backgrounds and points of view,” he said. “I started — on my own — going to the Yale Black Law Students Association every year starting in 2012. I think I’m the only judge who has done something like that, or certainly one of the few.”

“It was important to him that everyone have access,” Rakim Brooks, a former Kavanaugh clerk, told The Post. Brooks had attended a 2014 Yale meeting the nominee held with African-American students, according to The Wall Street Journal.

Kavanaugh and his supporters argue that this commitment to diversity extends back through his time at the White House, when former President George W. Bush wanted to prioritize ushering in a more diverse roster of candidates as nominees for the federal bench.

Meanwhile, as The WSJ has pointed out, Kavanaugh’s history on court cases related to issues of racial inequality is … complicated. The WSJ especially calls out the awkward contrast between Kavanaugh’s work promoting diversity among the White House’s judicial nominees, while also bolstering the administration’s argument against race-conscious college admissions. Kavanaugh has said he didn’t really see a “contradiction” between the two, noting, “Diversity is a permissible goal, but a state must use race-neutral criteria when available.”

The dissonance between these two positions is something that didn’t go unnoticed by lawmakers during the hearing this week.

“You’ve told me about the diversity you’ve promoted in law clerk hiring and I’m so grateful for it. … I’m not asking you about the five black clerks you have,” said Sen. Cory Booker on Wednesday, as Kavanaugh deflected a question regarding his perspective on a program that helped advance minority businesses.

His judicial record has prompted pushback from civil rights groups like the NAACP and the Leadership Conference on Civil and Human Rights, which have expressed worry that he could roll back voting rights protections and race-conscious affirmative action programs.

“Brett Kavanaugh’s commitment to diversity and inclusion is a myth,” said NAACP President Derrick Johnson in a statement. “There is nothing in his legal record that would indicate anything other than a zealous opposition to remedies to racism, particularly affirmative action. … His opposition to race-conscious measures to ensure equal opportunity is particularly troubling.”

While Kavanaugh has discussed cases when he backed racial discrimination claims that workers have filed — including a detailed opinion denouncing the use of a racial slur by a manager against his employee — activists argue that the preponderance of his record includes multiple opinions that reflect a broader willingness to side with corporate interests.

As noted by a report compiled by the NAACP Legal Defense Fund, which reviewed more than 300 of Kavanaugh’s legal opinions, “[He has] generally ruled against workers raising claims of employment discrimination and workers seeking to work together to protect their rights.”

In Howard v. Office of the Chief Administrative Officer of the U.S. House of Representatives, for example, Kavanaugh broke with the DC Circuit majority and argued that an African-American woman working as a deputy budget director at the House of Representatives would not be able to pursue claims of retaliation in a federal district court, because she could endanger confidential legislative business. In the case, the plaintiff argued that her boss fired her after she filed a discrimination claim — a suit the bulk of the DC Circuit panel said she should be able to pursue.

As Vox’s Alexia Fernández Campbell writes, Kavanaugh’s argument in the Howard case would also likely limit congressional workers from moving forward with many claims of sexual harassment — because sharing their allegations could be too much of a threat to sensitive legislative business:

Kavanaugh’s logic would make it nearly impossible for women who work in congressional offices to sue for sexual harassment, on the grounds that they may reveal confidential information about legislative acts. Kavanaugh would prefer these claims to remain outside the courts, hidden from public view, the way they have for decades.

In Rattigan v. Holder, Kavanaugh dissented from the DC Circuit as well, opposing the ability of a black Jamaican FBI employee to pursue a retaliation claim against the agency.

Similarly, when it comes to evaluating voting rights and affirmative action, Kavanaugh has vocalized concerns about racism, but his acknowledgment of inequality is complicated by his ultimate legal opinions.

“Racial insensitivity, racial bias, and indeed outright racism are still problems throughout the United States,” Kavanaugh wrote in a 2012 decision in South Carolina v. Holder that delayed the implementation of a South Carolina voter ID law. “The long march for equality for African-Americans is not finished.” That same decision, however, argued that the voter ID law — a law actively opposed by the Obama administration’s Justice Department due to a burdensome photo ID requirement — could ultimately be implemented.

Although the two other judges in the three-judge panel concurred with Kavanaugh on the voter ID decision itself, they notably wrote their own opinion detailing the importance of the Voting Rights Act in continuing to protect voters, something Kavanaugh stopped short of joining.

“Your answers don’t provide me comfort, as a justice of our nation’s highest court, that you will fairly take into account the barriers that continue to disenfranchise minority voters,” Booker said on Wednesday.

As civil rights groups have also noted, Kavanaugh played an integral role in developing the Bush administration’s case against race-conscious affirmative action programs at the University of Michigan. Among the cases he made, Kavanaugh said the government should not provide the impression that it “embraced diversity as a compelling governmental interest.”

As a private attorney representing a client, he also argued in an amicus brief for Rice v. Cayetano that native Hawaiians should not benefit from affirmative action programs that factor in their history as the indigenous peoples of the state. In a Wall Street Journal op-ed reflecting on the case, Kavanaugh went one step further and called the program — which only enabled native Hawaiians to elect trustees for the Office of Hawaiian Affairs — a “naked racial spoils system.”

“It’s a very common dog whistle, especially in the South, where you’re … pitting poor white people against poor black people,” said Rep. Cedric Richmond, the Chair of the Congressional Black Caucus, of the term, while testifying as a witness on Friday.

An email that was recently dropped from his time at the Bush administration indicated that Kavanaugh sought to suggest that a DOT policy that helped promoted minority businesses could amount to a “naked racial set-aside.”

A comment that has been at the center of questions about Kavanaugh’s perspective on race is a statement he made in 1999. “I see as an inevitable conclusion within the next 10 to 20 years when the court says we are all one race in the eyes of government,” Kavanaugh said in a Christian Science Monitor interview as the Rice v. Cayetano case being considered. Kavanaugh on Wednesday said his belief that everyone would be perceived as “one race” under the law was simply “aspirational.”

Despite his effort to distance himself from these remarks, it’s clear that this type of thinking has influenced how he has laid out arguments on policies related to race.

In example after example, Kavanaugh has used this reasoning in arguments he made. “The Michigan program is unconstitutional because race-neutral programs should be employed,” he wrote in a Bush-era email discussing race-conscious affirmative action.

Though this approach may appear well-intentioned, it’s a framing that can fundamentally ignore inequities that individuals of different backgrounds face.

In citing his own experiences working on behalf of women and minorities — actions that should warrant recognition of their own — Kavanaugh seemed to levy a common argument that has been used time and again that disregards the need to address a larger system of discrimination: It suggests that personal advocacy toward women and people of color is enough.