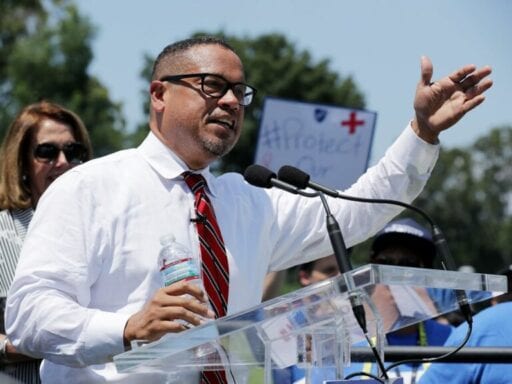 Monahan’s son, 25, Austin Aslim Monahan, made the allegations in a Facebook post on Saturday and claimed there is video of the abuse, though he said in an interview later he did not have the tape. His mother tweeted out that her son is telling the truth.

“Karen and I were in a long-term relationship which ended in 2016, and I still care deeply for her well-being,” Ellison said in a statement. “This video does not exist because I never behaved in this way, and any characterization otherwise is false.”

In a lengthy statement posted over the weekend, Austin Monahan said he and his brother had watched their mother “come out of pure hell” after ending her relationship with Ellison. He alleges that in mid-2017, he found over 100 text and Twitter messages between his mother and Ellison as well as the two-minute video showing Ellison dragging her from a bed, calling her a “fucking bitch,” and asking her to leave his home. He wrote that his mother asked her children to keep the alleged abuse under wraps but was now planning to share her story.

“My mom has always tried to protect me and my brother,” he wrote. “She doesn’t have to protect us anymore and we aren’t letting her stand alone.”

This new allegation against @KeithEllison is quite something. #MNPol pic.twitter.com/Khl64U02CA

Washington Post reporter Dave Weigel posted Ellison’s statement denying the accusations, and noted that the story has been circulating for some time in Minnesota but hadn’t been published because it didn’t stand up to media scrutiny.

Keith Ellison flatly denies allegation that he abused an ex girlfriend. The story had been circulating in MN, and not held up under media scrutiny, so no stories ran. It blew up last night after the ex’s son posted the allegation on Facebook. pic.twitter.com/A3VQQhgzQh

A Twitter account that appears to belong to Monahan tweeted that she is “so proud” of her son for his courage and asked people to leave him alone. She also said her son’s statements were true.

The account also posted purported text messages sent between Monahan and Ellison from December 2017, some of which appear to have contained Ellison’s phone number.

Ellison’s spokesperson did not respond to my inquiry as to whether the phone number shown indeed belongs to Ellison. I called the number and it rang and went to voice mail, with a message that appears to be from Ellison saying it’s him. The phone number can also be tied to him online.

Others have him listed as “Dc” and are allegedly from April 2018. Some of the messages appear to be intentionally cut off.

Briana Bierschbach at MPR News reports that Monahan shared more than 100 text and Twitter messages between her and Ellison with the outlet. The communications show them discussing their breakup, some of which was positive, some of which was not, but “there is no evidence in the messages reviewed by MPR News of the alleged physical abuse.” In one exchange, Monahan told Ellison she wanted to write about their “journey” in a chapter of her book, which he called a “horrible attack on my privacy.”

Monahan’s son told the Star Tribune that he wasn’t in possession of the alleged video showing abuse but stood by his post. “I only know what I saw and I know what’s true,” he said.

This post was brought to my attention because I was tagged in this post. Domestic Violence is never ok. The incidents described are troubling. I call on Keith Ellison to answer these allegations.https://t.co/CQ1LSVfZqf

Monahan told MPR News that she and Ellison met the night before he announced his attorney general run because he was worried she would discuss their relationship.

Ellison’s spokesman did not return request for comment on those allegations.

The Democratic National Committee has not yet commented on the allegations against Ellison. His Minnesota attorney general primary race is on Tuesday.

Apple’s iOS 15 will come with better privacy for people who pay for it
Cardi B says she used to rob men. Her image was built to withstand scandals like this.
Sharp Objects wraps small-town murder clichés in an irresistibly glossy package
“I think this is a wake-up call”: Seeing a familiar face in the Capitol riot
Elon Musk and the Thai cave rescue: a tale of good intentions and bad tweets
Why we can’t always be “nudged” into changing our behavior