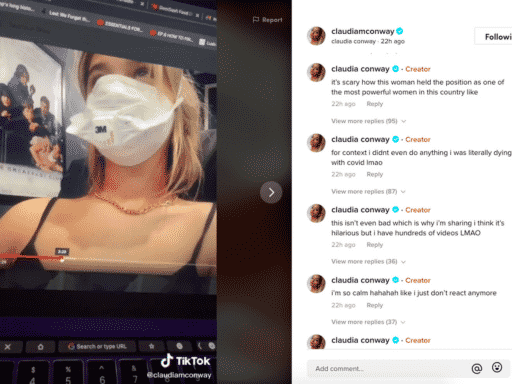 Kellyanne Conway’s 16-year-old daughter has provided an ugly look into their family life, and the latest accusations are especially troubling.

In since-deleted TikToks, Claudia said that the photo was of her and that she suspected her mother had taken a picture of it while taking possession of her phone. She also said she suspected that Kellyanne’s phone was hacked. “I’m shaking, I don’t know what to do,” she says in one video. “Kellyanne you’re going to fucking jail,” she says in another. Twitter told Variety that it is investigating the incident.

Yet despite an immediate outcry of support and help for Claudia, including a viral call to send a tip to the National Center for Missing and Exploited Children, and hashtags like #SaveClaudiaConway and #JusticeForClaudia, Claudia again turned to TikTok to send what she says is a final message on Tuesday morning.

“I shouldn’t have made this all public,” she wrote. “Please do me a favor and stop spreading it because it hurts me more than it helps me.” Addressing past videos in which she said that if she ever disavowed something she said on TikTok, she said, “This isn’t forced, this is coming completely from me. I have faith and I know that my mother would never put something like that on the internet.”

After announcing that she was taking a break from social media, she said, “Please no threats, no calls to authorities.” Many of her followers and concerned folks on Twitter remain convinced that these videos were not made of Claudia’s own accord.

The posted photo is only the latest in a troubling timeline of Conway family dynamics playing out online. Last week Claudia, daughter of Kellyanne and anti-Trump Republican attorney George Conway, alleged that her mother has been “physically, mentally, and emotionally abusive” on TikTok.

On January 19, Claudia posted a series of videos appearing to show Kellyanne shouting, cursing frequently, belittling, and seemingly hitting her daughter. Claudia said she had been recording their fights for years, and that these examples were only a handful of many throughout her life.

Some of what can be heard in the video, ostensibly Kellyanne speaking to Claudia: “Fuck you!” “Bitch.” “If you only knew what people thought of you.” In another, she claims, “You can’t get coronavirus from the president.” (Kellyanne tested positive for Covid-19 after attending a party hosted by then-President Trump.)

During the afternoon of January 20, Claudia wrote to followers, “like I’m not even kidding if any of you live in this area come pick me up” under a video of a woman who appears to be Kellyanne explaining to police that she feels unsafe.

Claudia has been vocal about her progressive beliefs and her difficult relationship with her mother on TikTok since last summer, when she supported Black Lives Matter and repeatedly voiced her hatred of Trump. Then, in October, she was the first to report that her mother was showing signs of Covid-19 after attending a White House celebration for Amy Coney Barrett’s Supreme Court nomination. (Vox attempted to contact both Kellyanne and Claudia Conway for comment.)

Immediately, Claudia was heralded by adults on Twitter as a symbol of Gen Z revolution, an American hero, and a better journalist than Bob Woodward. Yet Claudia herself has said that’s not the point she hopes people take from her videos: All she wants to do, she says, is “show my side of the story.”

Her side of the story, from what she’s shown us, is harrowing. Here is her video titled “a covid recap with kelly,” which depicts a series of insults and the line, “You’re lucky your mom’s pro life.” Claudia commented underneath it that “it’s scary how this woman held the position as one of the most powerful woman in this country like.” (The content in the following videos may be disturbing for some viewers.)

The end of this video seemingly shows a hand hitting her face as she records it. Much of the footage seems to show clear instances of an adult berating a child, and is deeply uncomfortable to watch. After the videos started to gain traction, Claudia filmed another explaining her decision and providing more context. Here is the full transcript:

Hey guys, I just wanted to add a little context to what I just posted. I know my words are going to be twisted by the media but I just want to put it out there. I’m not looking to hate on my mom, I just think it’s important to tell my side of the story and my experience. I was just going through some videos, I have hundreds and hundreds of videos just like that and I thought it was important because as a woman who has such power in this country I don’t think people really know how she is. And it’s also a reminder to everybody who is in a similar situation that you’re not alone, and that trust me, I get it. In terms of what can be done, there’s nothing that can really be done. I’ve tried everything. My parents are too powerful and nothing happens. I’m probably going to get in a lot of trouble for this. I just want everyone in the world watching this to know that I’m not lying at all. I wouldn’t lie about anything like this.

She also made several videos afterward, one of which attempts to express how scary it was to put such intimate details on the internet:

Also I’m extremely scared after posting that, very anxious, don’t know what’s about to happen. She’s probably going to publicly say that she’s not abusive and what not, but that’s kind of what manipulators do and narcissists do. I’m not looking for attention, I’m not looking for anything, I’m just in a situation that’s really physically, mentally, and emotionally abusive and I think it’s important that everybody sees that.

Another included a message to the media:

And before the media posts this, the Daily Mail, the New York Times, whatever, because I know they will, it’s just what I’m used to. That was not in any way to bring down my mom. They like to call me a “rebellious teenager,” whatever, who’s making up shit, but I’m not. I’m not making up anything. I’m just telling my side of the story.

Finally, she revealed that police had shown up at her door when she was alone after the videos started going viral. She said she told them she was fine and that they left, and that afterward, she felt guilty, “even though I shouldn’t.” In a reply to one comment, she says, “I’m really scared and it’s my mom’s birthday so I feel guilty and invalid even though i shouldn’t and my anxiety is spiraling.”

These videos, taken without context, seem to be a plea for some kind of help. But according to Claudia, the reality is more complicated. Though she said she knew they would gain media attention, she has openly expressed her dislike of being discussed in the press. She also has made clear several times that she has tried to avoid raising legal accusations against her mother. “this isn’t even bad but i’m not tryna put her in jail,” she wrote in one comment. However, she said that she has had experience with the authorities in the past, but that “they do nothing. She’s way too powerful.” In a since-deleted video, Claudia said that Child Protective Services have interviewed her family “and they didn’t do shit.”

Claudia’s allegations and the evidence she provides that support them — of at best a dysfunctional and difficult family environment and at worst a seemingly abusive one — are undoubtedly serious. Yet so is the enormous public pressure of being a 16-year-old who wants to tell her own story while under a media microscope.

Though viewers over the past few months have dissected her content and theorized about what it could mean, as we’ve seen with other attempts to analyze the behaviors of famous people in crisis, our inclination to help can often do more harm than good. As I wrote the last time Claudia made headlines, “we, the audience, have no ability — nor do we have any right — to ‘save’ or ‘free’ Claudia from her family situation, but we do have a duty to take her and every other young person’s pleas seriously.”

At times, she has seemed to just want to be heard. “my situation is a mess but I know it isn’t my fault,” she wrote in a comment on January 20. “I will continue to post about my experiences as a way to spread awareness.”

Claudia is now seeking privacy. She still seems to be a teen girl in need of help — but that help will likely not come from even more public attention. It’s possible that we can both believe her accounts of what her relationship is like with her mother in the height of their own conflict, and also believe her when she begs for a break from the spotlight.

Why the US bears the most responsibility for climate change, in one chart
How an intern’s “money diary” became the latest flashpoint in the conversation about privilege
Vox Sentences: Leviathan, or Mudcarp
Vox Sentences: Cuba not-so-libre
HR experts: We’d nip Biden’s behavior in the bud
4 winners and 10 losers from Game of Thrones’ next-to-last episode, “The Bells”