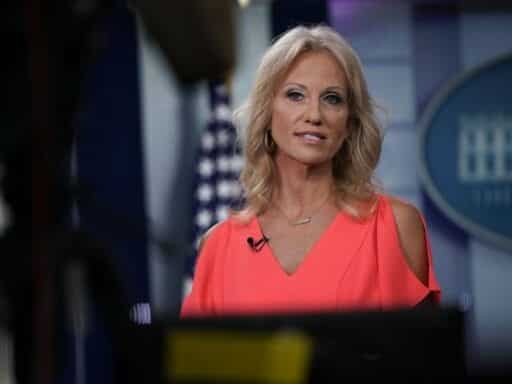 Her comments mark a break from the White House’s public statements.

Kellyanne Conway, one of the Trump administration’s most reliable mouthpieces — except in the most extreme instances — appeared to break with the White House public statement on Monday in her response to sexual assault allegations against Supreme Court nominee Brett Kavanaugh.

Conway, a senior counselor to the president, emphasized that Christine Blasey Ford — the woman who’s come forward with allegations that Kavanaugh forced himself on her while they were both teenagers — deserves to be heard in sworn testimony. Her comments mark a significant shift from the generic statement that’s been shared by the White House, which has simply included a blanket denial of the allegations.

“I am willing to talk to the Senate Judiciary Committee in any way the Committee deems appropriate to refute this false allegation, from 36 years ago, and defend my integrity,” Kavanaugh said in a statement via the White House.

“This woman will be heard,” Conway said, adding that Kavanaugh has completed multiple FBI vettings and that these allegations have “to be weighed against what we already know, which is that Judge Kavanaugh is a man of character and integrity.”

You can watch the full Conway interview, below.

Kellyanne Conway on Ford: “This woman should not be insulted and she should not be ignored… This woman will be heard… that has to be weighed against what we already know, which is that Judge Kavanaugh is a man of character and integrity.” pic.twitter.com/KO9rbBmmNA

In the interview, Conway mentions that she’s spoken with the president as well as multiple senators about how the response to these allegations has been handled. Trump has yet to weigh in.

Senate Judiciary Chair Chuck Grassley (R-IA) seems intent to proceed with a committee vote on Kavanaugh’s nomination, which is set for this Thursday. Democrats, as well as several Republican lawmakers including Jeff Flake and Bob Corker, have called for a delay until senators have had the chance to hear more from Ford.

Lawmakers have known there were allegations against Trump’s second Supreme Court nominee since last week, when news broke about an anonymous letter accusing him of sexual misconduct. Ford came forward Sunday in an interview with the Washington Post, throwing a wrench into what had been a seemingly smooth path to confirmation. In it, she alleges that Kavanaugh and a friend pushed her into a room while they were at a party in the 1980s, where he tried to force himself on her, attempted to take off her clothes, and put his hand over her mouth when she tried to scream.

Republicans have said there are plans in the works to hold follow-up calls with Kavanaugh and Ford to discuss these allegations. Democrats, however, argue that the committee’s review of Kavanaugh has already been too partisan and unreliable, and would prefer that the FBI handle the investigation. Ford’s lawyer, Debra Katz, has said she is willing to testify under oath in front of the Senate Judiciary Committee.

Why Facebook and Apple are fighting over your privacy
Border chief explains why there have been no ICE raids at Trump properties
How tourist towns might survive the pandemic
Vox Sentences: Executive overprivilege
Michiko Kakutani, esteemed book critic, has finally written a book. It’s about Trump.
We are not ready to hold an election during a pandemic. Just look at Ohio.