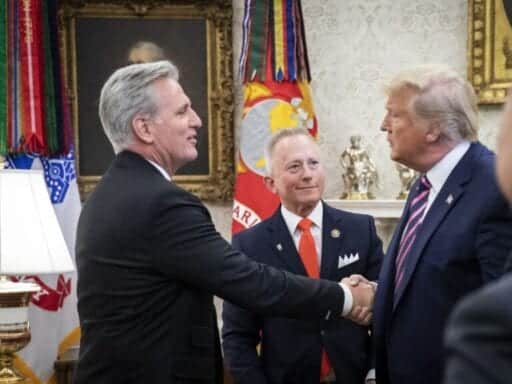 The House minority leader brags about patronizing the president’s business.

In one Instagram post, Rep. Kevin McCarthy destroyed the idea that Republicans have the sorts of good-faith concerns about corruption they said they did during the impeachment trial.

On Wednesday evening, the House minority leader posted a photo of himself dining at the Trump International Hotel with President Trump and a few other Republicans, including Reps. Jim Jordan and Mark Meadows. Trump was reportedly at his hotel in Washington, DC, for a fundraising committee reception.

Family dinner. Tag a friend who should be sitting at the table with us.

But instead of “family,” the more apt description of McCarthy’s relationship to Trump in this setting is “customer.” That’s because, in a break from decades of presidential precedent, Trump refused to divest from his businesses before his inauguration and as a result still owns and profits from the Trump International Hotel, among other resorts and properties.

A member of Congress directly lining the president’s pockets would be galling no matter the circumstances, but it’s especially so considering how McCarthy defended Trump during the impeachment process.

Trump was impeached for allegedly trying to leverage congressionally approved military aid to Ukraine into political favors for his reelection campaign. The Government Accountability Office (GAO) determined the hold on the aid was illegal. But that didn’t bother McCarthy, who insisted that Trump was simply trying to root out corruption in Ukraine.

“These are taxpayer dollars going to another country that people believe there was corruption with a new administration,” McCarthy said during a news conference last month. “I think it was the rightful thing to do.”

.@GOPLeader McCarthy says he has no problem with the administration acting illegally (per the GAO’s finding) by withholding aid to Ukraine because all they were trying to do is root out corruption pic.twitter.com/qkEGLKMV6L

But Trump didn’t go through the proper congressional channels to hold up the aid, and the claim that the hold-up was rooted in concerns about corruption is belied by the fact that a top Defense Department official told Congress last May that Ukraine had made good enough progress on anti-corruption efforts to merit the aid.

Specifics aside, pretending that arguably the most personally corrupt president in American history has serious concerns about corruption abroad was absurd on its face. But it’s especially so in light of McCarthy and other Republicans who defended Trump throughout the impeachment process making a spectacle out of patronizing his business.

McCarthy thinks people aren’t able to figure this out

While members of Congress currying favor with the president by patronizing his businesses is pretty close to the textbook definition of corruption, McCarthy has pretended to be oblivious about it.

During a news conference last September — at a time when Vice President Mike Pence, Attorney General William Barr, and Air Force officials were all under scrutiny for seemingly needless trips to Trump properties — McCarthy was asked if he had concerns about officials lining the president’s pockets. He indicated he did not.

“The president’s resorts are hotels that he owns, that people are traveling. It’s just like any other hotel,” he said. “I don’t know that that’s different than anything else. Is it different than if I go and stay or eat at a Marriott here or eat at the Trump?”

.@GOPLeader: “The President’s resorts are hotels that he owns, that people are traveling. It’s just like any other hotel… I don’t know that that’s different than anything else. Is it different than if I go and stay or eat at a Marriott here or eat at the Trump?” pic.twitter.com/sKQHJa0Hmo

Around the same time, Trump made a similarly unconvincing defense of corruption that benefits him, arguing that since he’s not directing anyone to do it, there’s nothing untoward about it. It’s just free market competition, and he happens to be selling products and services that people like.

Trump claims he played no role in Pence’s decision to patronize a hotel he still owns & profits from in Ireland, but then provides a plug for his properties.

“I have a lot of hotels all over the place, & people use them because they are the best … people like my product.” pic.twitter.com/588Zul6d7f

The reality, however, is that the president owning and profiting from a business while he’s in office creates market-distorting incentives for people to line his pockets — including Republican members of Congress who apparently feel compelled to post on Instagram about it, in the process disproving a talking point they used to defend the president throughout the just-completed impeachment inquiry.

Mueller just indicted 12 Russian intelligence officers for hacking and leaking Democratic emails
The UK Parliament is voting on Brexit amendments Tuesday. What does it mean?
Big Tech is “scary” because it wants to be the solution to everything, New York City Mayor Bill de B...
Google’s education tech has a privacy problem
Why we love shark movies
A Silicon Valley firm said it could help investors get expedited coronavirus tests — but then said i...