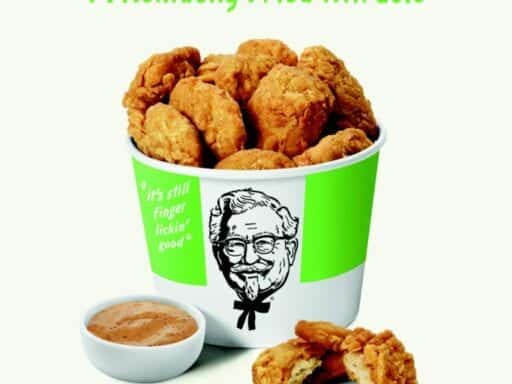 Share
Loading...
Beyond Meat’s meatless nuggets will be for sale at a KFC in Atlanta — and, if that goes well, potentially at KFC locations everywhere. | Courtesy of KFC + Beyond Meat

Beyond Meat and KFC have partnered to offer the first fast-food plant-based chicken at one Atlanta location.

No chickens were harmed in the making of the new KFC nuggets and wings going on the menu in Atlanta.

A single KFC franchise — the one near the SunTrust Park baseball stadium in Atlanta — will, starting Tuesday, offer meatless chicken from the plant-based food company Beyond Meat. The deal makes KFC the first fast-food restaurant to serve plant-based chicken.

It’s a huge step forward for both companies — and for chickens, nearly 50 billion of which are raised in factory farms in the US annually.

“KFC is an iconic part of American culture and a brand that I, like so many consumers, grew up with. To be able to bring Beyond Fried Chicken, in all of its KFC-inspired deliciousness to market, speaks to our collective ability to meet the consumer where they are and accompany them on their journey. My only regret is not being able to see the legendary Colonel himself enjoy this important moment,” said Ethan Brown, founder and CEO of Beyond Meat, in the press release announcing the deal.

Founded in 2009, Beyond Meat produces plant-based products that imitate the taste, texture, and nutrient profile of meat without killing any animals. Earlier this year, the company went public, and its stock has soared as more and more restaurants sign plant-based meat deals.

So far, Beyond Meat — like its competitors — has largely focused on imitation beef, with its signature Beyond Burger and new offerings of imitation ground beef. There are some good reasons for plant-based companies to start with beef: Cows are huge contributors to global warming, and there are big sustainability gains from replacing them with plant-based products.

But there are also some good reasons chicken should be at the top of the agenda. Each cow produces a lot of burgers, which means we kill far more chickens than cows to get the same amount of meat. And chickens are among the worst-treated animals on factory farms, caged in small, chemical-treated spaces where disease is rampant, and engineered to grow so quickly that their legs give out. Chicken farming also contributes to public health problems like antibiotic resistance and the spread of bird flu — and yes, chicken factory farms have a carbon footprint too.

For those reasons, animal welfare researchers have urged plant-based meat companies to figure out a substitute for chicken and other farmed chicken products like eggs. Now, Beyond Meat has answered that call with a partnership with the most famous fast-food chicken restaurant in America.

Greta Gerwig’s fresh take on Little Women won’t win Best Picture, but it should
Read: Kamala Harris’s historic acceptance speech
From FDR to Obama: A look back at inaugural traditions
This billionaire built a big-money machine to oust Trump. Why do some Democrats hate him?
Apple’s The Morning Show, starring Jennifer Aniston, looks dour and joyless in its first trailer
How the Sears catalog transformed shopping under Jim Crow, explained by a historian